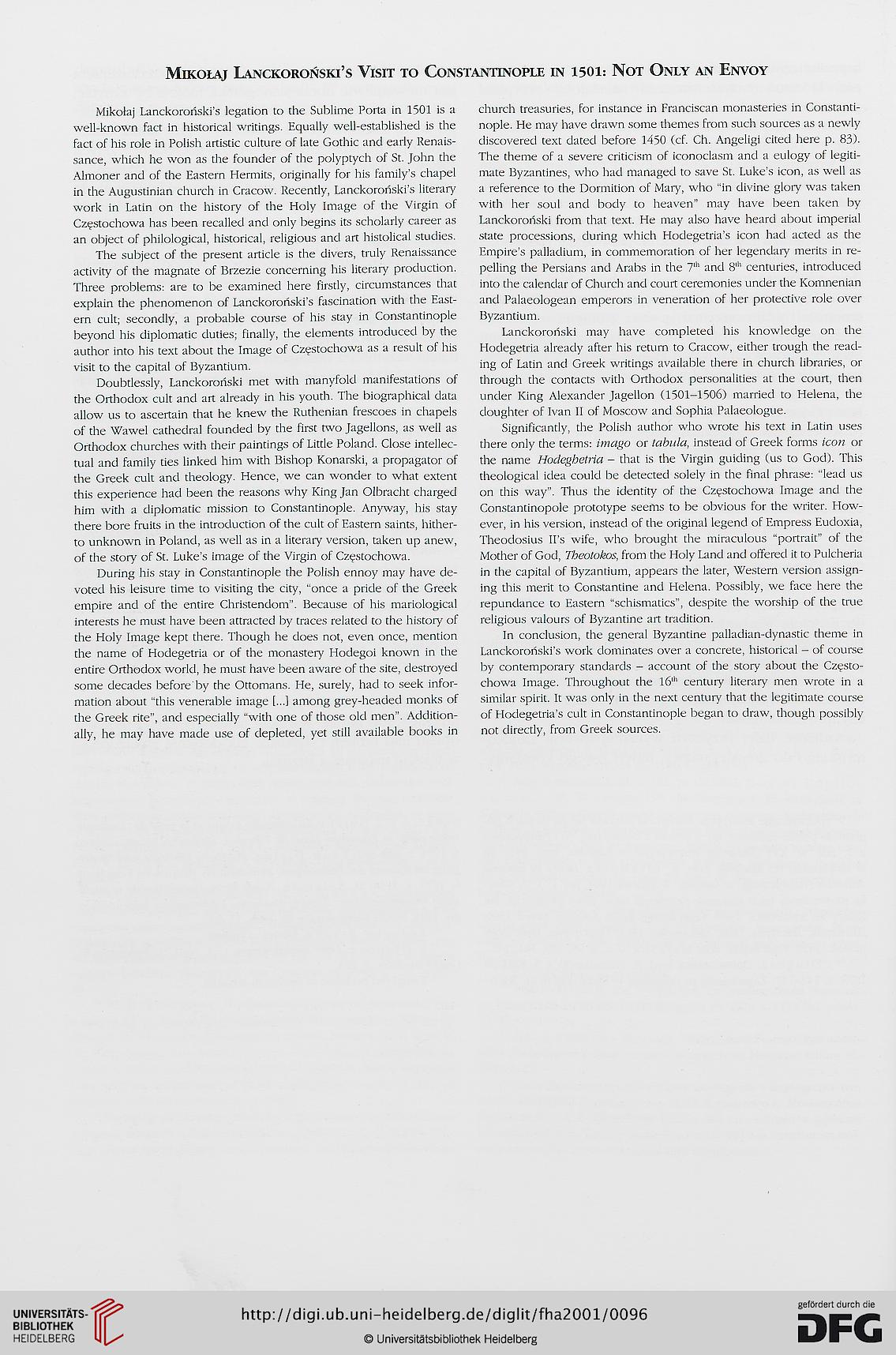 Mikołaj Lanckoroński’s legation to the Sublime Porta in 1501 is a
well-known fact in historical writings. Eąually well-established is the
fact of his role in Polish artistic culture of late Gothic and early Renais-
sance, which he won as the founder of the polyptych of St. John the
Alraoner and of the Eastem Hermits, originally for his family’s chapel
in the Augustinian church in Cracow. Recently, Lanckoroński’s literary
work in Latin on the history of the Holy Image of the Virgin of
Częstochowa has been recalled and only begins its scholarly career as
an object of philological, historical, religious and art histolical studies.

The subject of the present article is the divers, truły Renaissance
activity of the magnate of Brzezie concerning his literary production.
Three problems: are to be examined here firstly, circumstances that
explain the phenomenon of Lanckorońskfs fascination with the East-
ern cult; secondly, a probable course of his stay in Constantinople
beyond his diplomatic duties; finally, the elements introduced by the
author into his text about the Image of Częstochowa as a result of his
visit to the Capital of Byzantium.

Doubtlessly, Lanckoroński met with manyfold manifestations of
the Orthodox cult and art already in his youth. The biographical data
allow us to ascertain that he knew the Ruthenian frescoes in chapels
of the Wawel cathedral founded by the first two Jagellons, as well as
Orthodox churches with their paintings of Little Poland. Close intellec-
tual and family ties linked him with Bishop Konarski, a propagator of
the Greek cult and theology. Hence, we can wonder to what extent
this experience had been the reasons why King Jan Olbracht charged
him with a diplomatic mission to Constantinople. Anyway, his stay
there borę fruits in the introduction of the cult of Eastem saints, hither-
to unknown in Poland, as well as in a literary version, taken up anew,
of the story of St. Luke’s image of the Virgin of Częstochowa.

During his stay in Constantinople the Polish ennoy may have de-
voted his leisure time to visiting the city, “once a pride of the Greek
empire and of the entire Christendom”. Because of his mariological
interests he must have been attracted by traces related to the history of
the Holy Image kept there. Though he does not, even once, mention
the name of Hodegetria or of the monastery Hodegoi known in the
entire Orthodox World, he must have been aware of the site, destroyed
some decades before by the Ottomans. He, surely, had to seek infor-
mation about “this venerable image [...] among grey-headed monks of
the Greek rite”, and especially “with one of those old men”. Addition-
ally, he may have madę use of depleted, yet still available books in

church treasuries, for instance in Franciscan monasteries in Constanti-
nople. He may have drawn some themes from such sources as a newly
discovered text dated before 1450 (cf. Ch. Angeligi cited here p. 83).
The theme of a severe criticism of iconoclasm and a eulogy of legiti-
mate Byzantines, who had managed to save St. Luke’s icon, as well as
a reference to the Dormition of Mary, who “in divine glory was taken
with her soul and body to heaven” may have been taken by
Lanckoroński from that text. He may also have heard about imperial
State processions, during which Hodegetria’s icon had acted as the
Empire’s palladium, in commemoration of her legendary merits in re-
pelling the Persians and Arabs in the 7'1' and 811' centuries, introduced
into the calendar of Church and court ceremonies under the Komnenian
and Palaeologean emperors in veneration of her protective role over
Byzantium.

Lanckoroński may have completed his knowledge on the
Hodegetria already after his return to Cracow, either trough the read-
ing of Latin and Greek writings available there in church libraries, or
through the contacts with Orthodox personalities at the court, then
under King Alexancler Jagellon (1501-1506) married to Helena, the
doughter of Ivan II of Moscow and Sophia Palaeologue.

Significantly, the Polish author who wrote his text in Latin uses
there only the terms: imago or tabula, insteacl of Greek forms icon or
the name Hodeghetria - that is the Virgin guiding (us to God). This
theological idea could be detected solely in the finał phrase: “lead us
on this way”. Thus the identity of the Częstochowa Image and the
Constantinopole prototype seems to be obvious for the writer. How-
ever, in his version, instead of the original legend of Empress Eudoxia,
Theodosius II’s wife, who brought the miraculous “portrait” of the
Mother of God, Theolokos, from the Holy Land and offered it to Pulcheria
in the Capital of Byzantium, appears the later, Western version assign-
ing this merit to Constantine and Helena. Possibly, we face here the
repundance to Eastem “schismatics”, despite the worship of the true
religious valours of Byzantine art tradition.

In conclusion, the generał Byzantine palladian-dynastic theme in
Lanckorońskfs work dominates over a concrete, historical - of course
by contemporary standards - account of the story about the Często-
chowa Image. Throughout the l6lh century literary men wrote in a
similar spirit. It was only in the next century that the legitimate course
of Hodegetria’s cult in Constantinople began to draw, though possibly
not directly, from Greek sources.