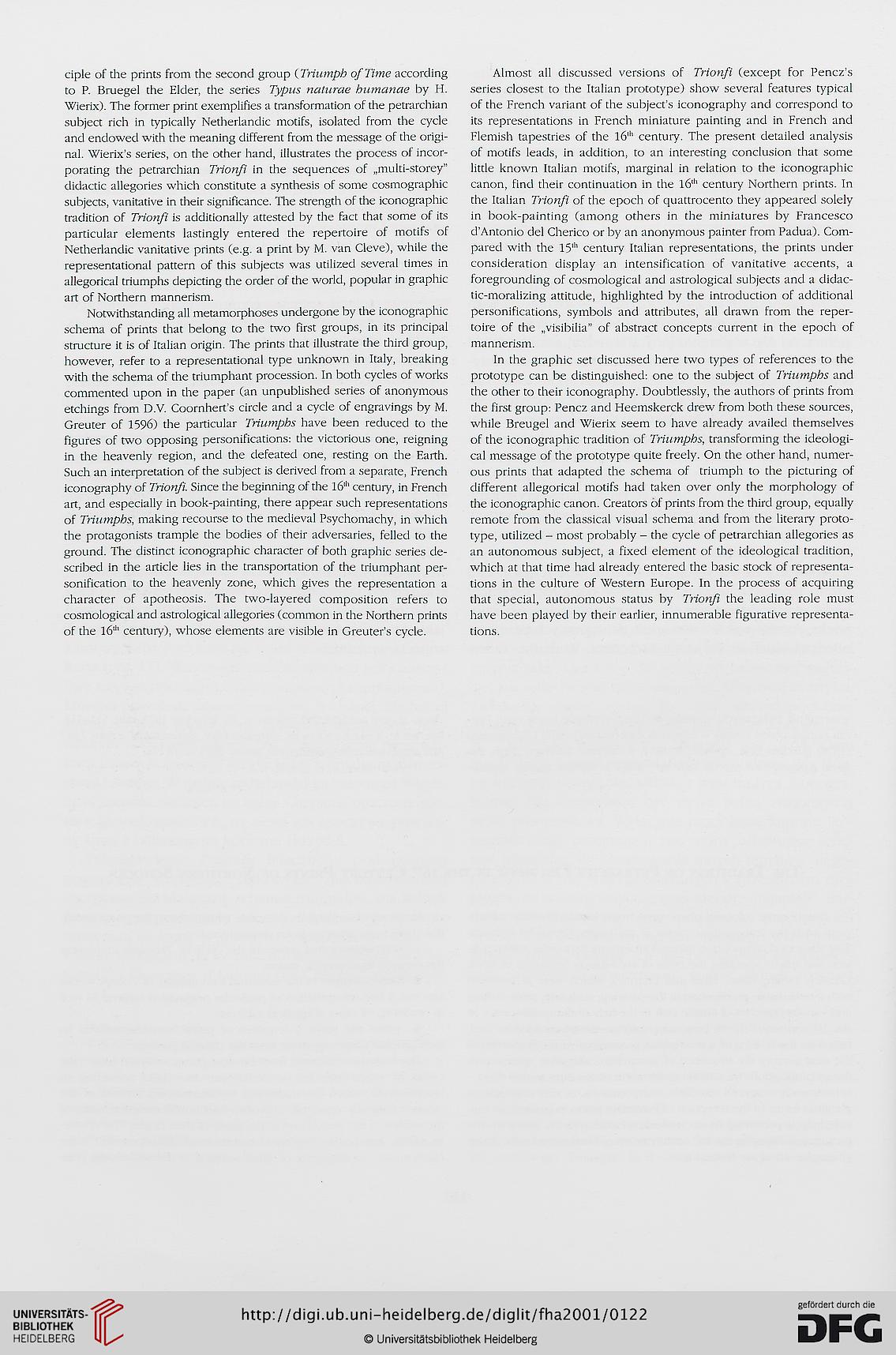 Information about OCR text
cipie of the prints from the second group (Triumpb ofTime according
to P. Bruegel the Elder, the senes Typus naturae humanae by H.
Wierix). The former print exemplifies a transformation of the petrarchian
subject rich in typically Netherlandic motifs, isolated from the cycle
and endowed with the meaning different from the message of the odgi-
nał. Wierix’s series, on the other hand, illustrates the process of incor-
porating the petrarchian Trionfi in the seąuences of „multi-storey”
didactic allegories which constitute a synthesis of some cosmographic
subjects, vanitative in their significance. The strength of the iconographic
tradition of Trionfi is additionally attested by the fact that some of its
particular elements lastingly entered the repertoire of motifs of
Netherlandic vanitative prints (e.g. a print by M. van Cleve), while the
representational pattern of this subjects was utilized several times in
allegorical triumphs depicting the order of the world, popular in graphic
art of Northern mannerism.

Notwithstanding all metamorphoses undergone by the iconographic
schema of prints that belong to the two first groups, in its principal
structure it is of Italian origin. The prints that illustrate the third group,
however, refer to a representational type unknown in Italy, breaking
with the schema of the triumphant procession. In both cycles of works
commented upon in the paper (an unpublished series of anonymous
etchings from D.V. Coornhert’s circle and a cycle of engravings by M.
Greuter of 1596) the particular Triumphs have been reduced to the
figures of two opposing personifications: the victorious one, reigning
in the heavenly region, and the defeated one, resting on the Earth.
Such an interpretation of the subject is derived from a separate, French
iconography of Trionfi. Since the beginning of the l6,h century, in French
art, and especially in book-painting, there appear such representations
of Triumphs, making recourse to the medieval Psychomachy, in which
the protagonists trampie the bodies of their adversaries, felled to the
ground. The distinct iconographic character of both graphic series de-
scribed in the article lies in the transportation of the triumphant per-
sonification to the heavenly zonę, which gives the representation a
character of apotheosis. The two-layered composition refers to
cosmological and astrological allegories (common in the Northern prints
of the 16"' century), whose elements are visible in Greuter’s cycle.

Almost all discussed versions of Trionfi (except for Pencz’s
series closest to the Italian prototype) show several features typical
of the French variant of the subjecfs iconography and correspond to
its representations in French miniaturę painting and in French and
Flemish tapestries of the l6,h century. The present detailed analysis
of motifs leads, in addition, to an interesting conclusion that some
little known Italian motifs, marginal in relation to the iconographic
canon, find their continuation in the l6th century Northern prints. In
the Italian Trionfi of the epoch of ąuattrocento they appeared solely
in book-painting (among others in the miniatures by Francesco
d’Antonio del Cherico or by an anonymous painter from Padua). Com-
pared with the 15th century Italian representations, the prints under
consideration display an intensification of vanitative accents, a
foregrounding of cosmological and astrological subjects and a didac-
tic-moralizing attitude, highlighted by the introduction of additional
personifications, symbols and attributes, all drawn from the reper-
toire of the „visibilia” of abstract concepts current in the epoch of
mannerism.

In the graphic set discussed here two types of references to the
prototype can be distinguished: one to the subject of Triumphs and
the other to their iconography. Doubtlessly, the authors of prints from
the first group: Pencz and Heemskerck drew from both these sources,
while Breugel and Wierix seem to have already availed themselves
of the iconographic tradition of Triumphs, transforming the ideologi-
cal message of the prototype ąuite freely. On the other hand, numer-
ous prints that adapted the schema of triumph to the picturing of
different allegorical motifs had taken over only the morphology of
the iconographic canon. Creators óf prints from the third group, eąually
remote from the classical visual schema and from the literary proto-
type, utilized - most probably - the cycle of petrarchian allegories as
an autonomous subject, a fixed element of the ideological tradition,
which at that time had already entered the basie stock of representa-
tions in the culture of Western Europę. In the process of acąuiring
that special, autonomous status by Trionfi the leading role must
have been played by their earlier, innumerable figurative representa-
tions.