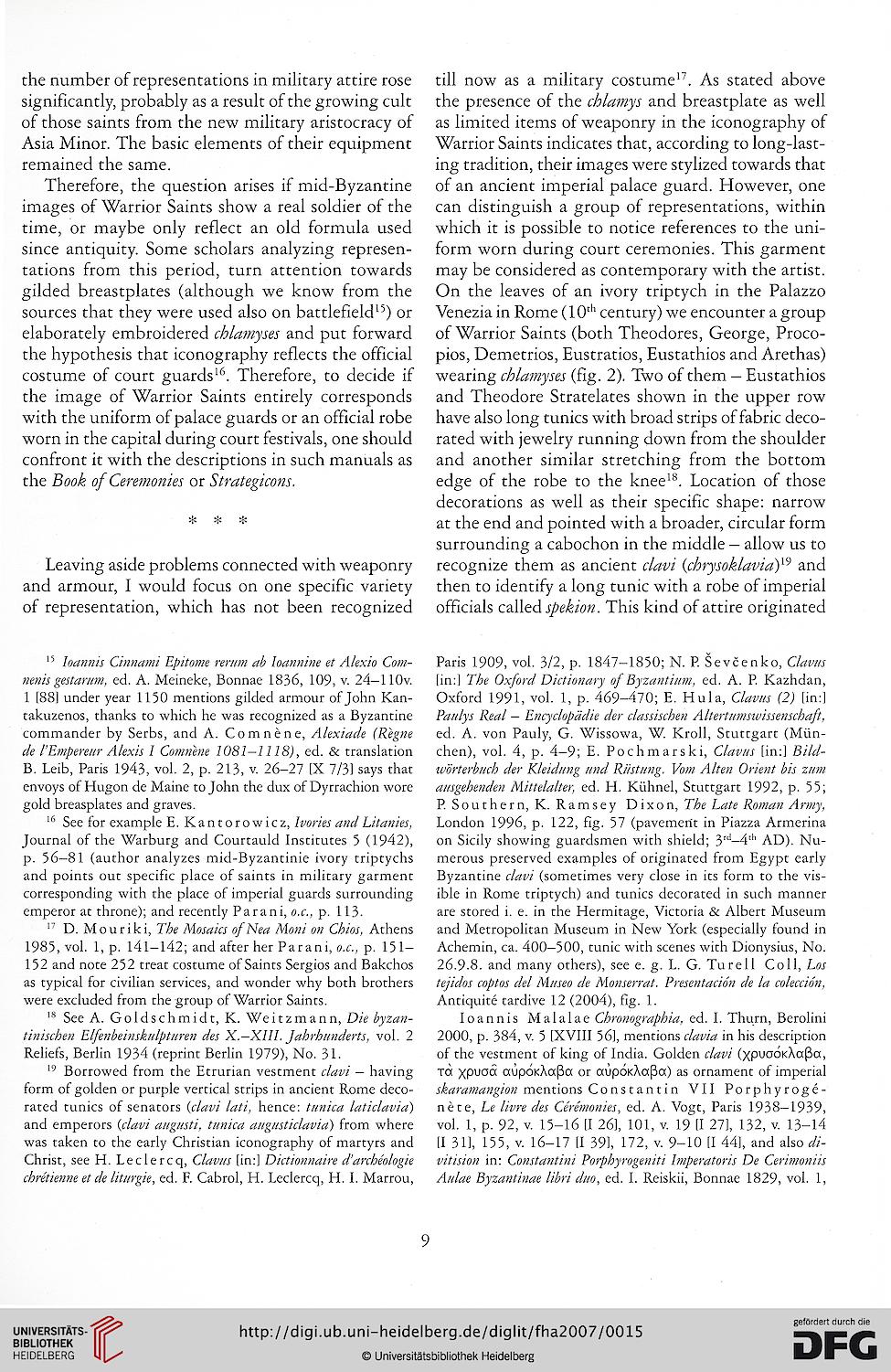 Information about OCR text
the number of representations in military attire rosę
signiflcantly, probably as a result of the growing cult
of those saints from the new military aristocracy of
Asia Minor. The basie elements of their eąuipment
remained the same.

Therefore, the question arises if mid-Byzantine
images of Warrior Saints show a real soldier of the
time, or maybe only reflect an old formula used
sińce antiquity. Some scholars analyzing represen-
tations from this period, turn attention towards
gilded breastplates (although we know from the
sources that they were used also on battlefield15) or
elaborately embroidered chlamyses and put forward
the hypothesis that iconography reflects the official
costume of court guards16. Therefore, to decide if
the image of Warrior Saints entirely corresponds
with the uniform of pałace guards or an official robę
worn in the Capital during court festivals, one should
confront it with the descriptions in such manuals as
the Book of Ceremonies or Strategicons.

Leaving aside problems connected with weaponry
and armour, I would focus on one specific variety
of representation, which has not been recognized

till now as a military costume17. As stated above
the presence of the chlamys and breastplate as well
as limited items of weaponry in the iconography of
Warrior Saints indicates that, according to long-last-
ing tradition, their images were stylized towards that
of an ancient imperial pałace guard. However, one
can distinguish a group of representations, within
which it is possible to notice references to the uni-
form worn during court ceremonies. This garment
may be considered as contemporary with the artist.
On the leaves of an ivory triptych in the Palazzo
Venezia in Romę (10th century) we encounter a group
of Warrior Saints (both Theodores, George, Proco-
pios, Demetrios, Eustratios, Eustathios and Arethas)
wearing chlamyses (fig. 2). Two of them — Eustathios
and Theodore Stratelates shown in the upper row
have also long tunics with broad strips of fabric deco-
rated with jewelry running down from the shoulder
and another similar stretching from the bottom
edge of the robę to the knee18. Location of those
decorations as well as their specific shape: narrow
at the end and pointed with a broader, circular form
surrounding a cabochon in the middle — allow us to
recognize them as ancient clavi (chrysoklavia)19 and
then to identify a long tunic with a robę of imperial
officials calledjpekion. This kind of attire originated