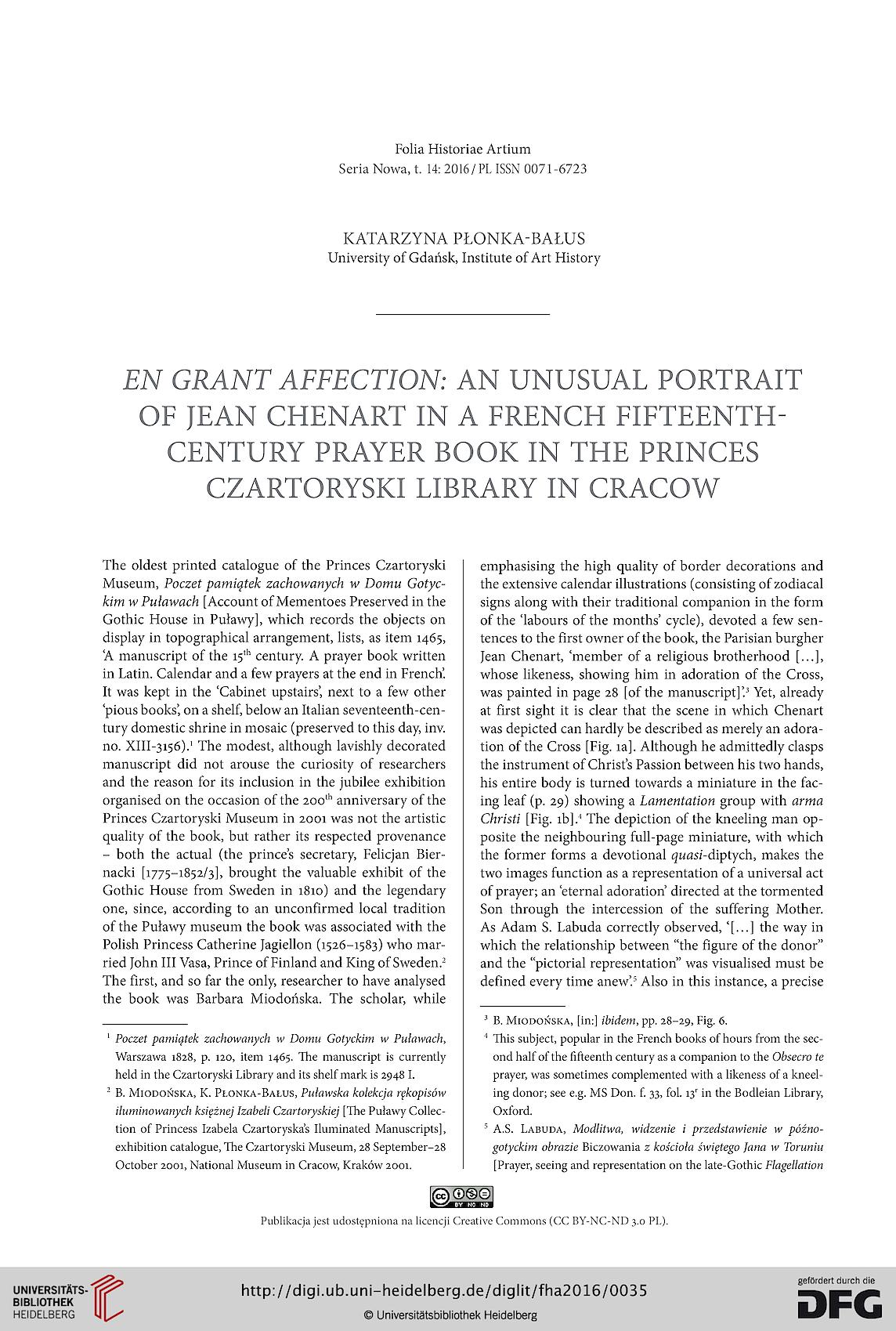 EN GRANT AFFECTION: AN UNUSUAL PORTRAIT
OF JEAN CHENART IN A FRENCH FIFTEENTH-
CENTURY PRAYER BOOK IN THE PRINCES
CZARTORYSKI LIBRARY IN CRACOW

The oldest printed catalogue of the Princes Czartoryski
Museum, Poczet pamiątek zachowanych w Domu Gotyc-
kim w Puławach [Account of Mementoes Preserved in the
Gothic House in Puławy], which records the objects on
display in topographical arrangement, lists, as item 1465,
A manuscript of the 15 th century A prayer book written
in Latin. Calendar and a few prayers at the end in French’.
It was kept in the ‘Cabinet upstairs’, next to a few other
‘pious books’, on a shelf, below an Italian seventeenth-cen-
tury domestic shrine in mosaic (preserved to this day, inv.
no. XIII-3156). 1 The modest, although lavishly decorated
manuscript did not arouse the curiosity of researchers
and the reason for its inclusion in the jubilee exhibition
organised on the occasion of the 200 th anniversary of the
Princes Czartoryski Museum in 2001 was not the artistic
quality of the book, but rather its respected provenance
- both the actual (the prince’s secretary, Felicjan Bier-
nacki [1775-1852/3], brought the valuable exhibit of the
Gothic House from Sweden in 1810) and the legendary
one, since, according to an unconfirmed local tradition
of the Puławy museum the book was associated with the
Polish Princess Catherine Jagiellon (1526-1583) who mar-
ried John III Vasa, Prince of Finland and King of Sweden. 2
The first, and so far the only, researcher to have analysed
the book was Barbara Miodońska. The scholar, while

1 Poczet pamiątek zachowanych w Domu Gotyckim w Puławach,
Warszawa 1828, p. 120, item 1465. The manuscript is currently
held in the Czartoryski Library and its shelf mark is 2948 I.

emphasising the high quality of border decorations and
the extensive calendar illustrations (consisting of zodiacal
signs along with their traditional companion in the form
of the ‘labours of the months’ cycle), devoted a few sen-
tences to the first owner of the book, the Parisian burgher
Jean Chenart, ‘member of a religious brotherhood [...],
whose likeness, showing him in adoration of the Cross,
was painted in page 28 [of the manuscript]’. 3 Yet, already
at first sight it is clear that the scene in which Chenart
was depicted can hardly be described as merely an adora-
tion of the Cross [Fig. ia]. Although he admittedly clasps
the instrument of Christ’s Passion between his two hands,
his entire body is turned towards a miniature in the fac-
ing leaf (p. 29) showing a Famentation group with arma
Christi [Fig. 1b]. 4 The depiction of the kneeling man op-
posite the neighbouring full-page miniature, with which
the former forms a devotional quasi-diptych, makes the
two images function as a representation of a universal act
of prayer; an ‘eternal adoration’ directed at the tormented
Son through the intercession of the suffering Mother.
As Adam S. Labuda correctly observed, ‘[...] the way in
which the relationship between “the figure of the donor”
and the “pictorial representation” was visualised must be
defined every time anew’. 5 Also in this instance, a precise

4 This subject, popular in the French books of hours from the sec-
ond half of the fifteenth century as a companion to the Obsecro te
prayer, was sometimes complemented with a likeness of a kneel-
ing donor; see e.g. MS Don. f. 33, fol. 13' in the Bodleian Library,
Oxford.