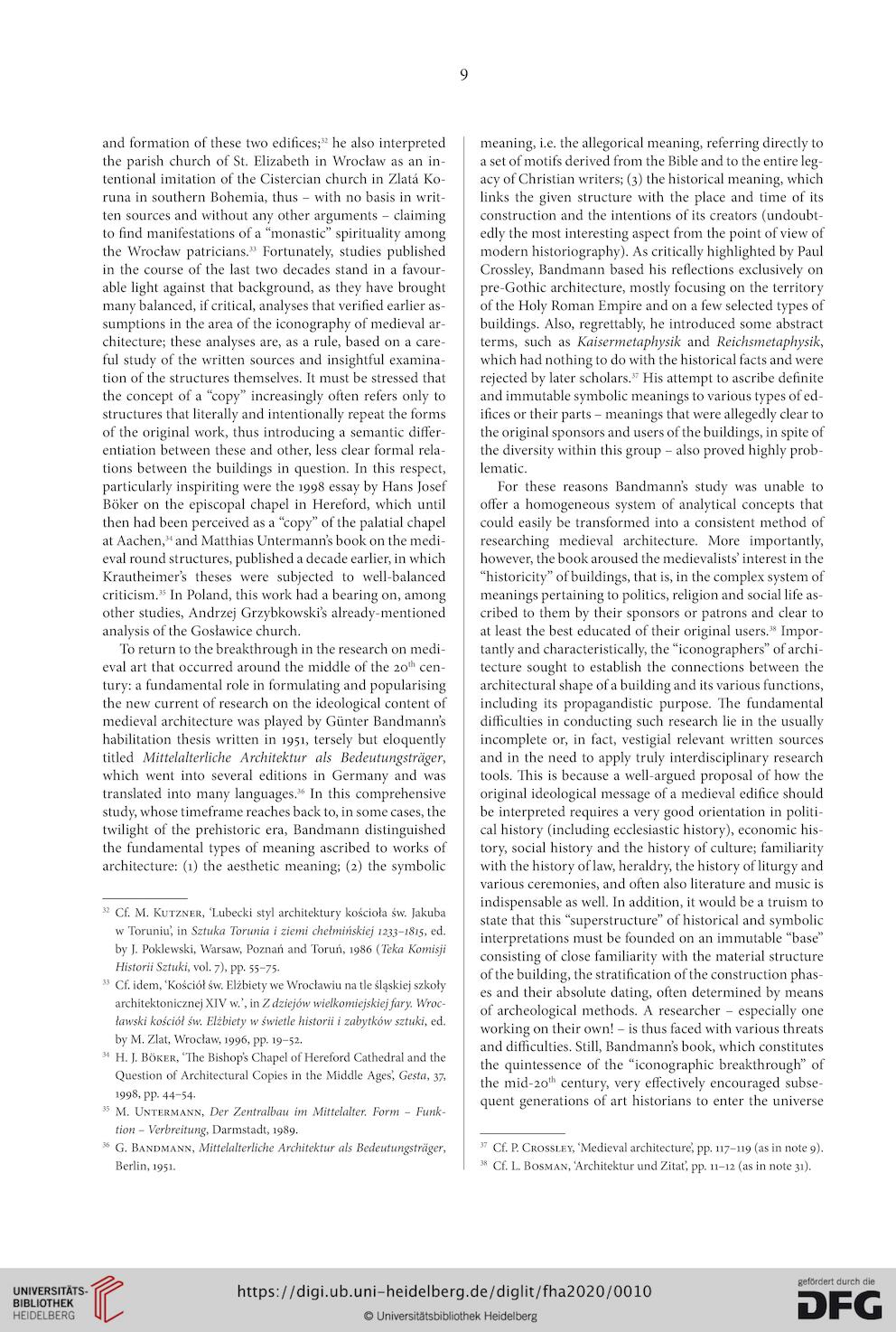 and formation of these two edifices;32 he also interpreted
the parish church of St. Elizabeth in Wroclaw as an in-
tentional imitation of the Cistercian church in Zlata Ko-
runa in southern Bohemia, thus - with no basis in writ-
ten sources and without any other arguments - claiming
to find manifestations of a “monastic” spirituality among
the Wroclaw patricians.33 Fortunately, studies published
in the course of the last two decades stand in a favour-
able light against that background, as they have brought
many balanced, if critical, analyses that verified earlier as-
sumptions in the area of the iconography of medieval ar-
chitecture; these analyses are, as a rule, based on a care-
ful study of the written sources and insightful examina-
tion of the structures themselves. It must be stressed that
the concept of a “copy” increasingly often refers only to
structures that literally and intentionally repeat the forms
of the original work, thus introducing a semantic differ-
entiation between these and other, less clear formal rela-
tions between the buildings in question. In this respect,
particularly inspiriting were the 1998 essay by Hans Josef
Böker on the episcopal chapel in Hereford, which until
then had been perceived as a “copy” of the palatial chapel
at Aachen,34 and Matthias Untermanns book on the medi-
eval round structures, published a decade earlier, in which
Krautheimers theses were subjected to well-balanced
criticism.35 In Poland, this work had a bearing on, among
other studies, Andrzej Grzybkowskis already-mentioned
analysis of the Gosławice church.
To return to the breakthrough in the research on medi-
eval art that occurred around the middle of the 20th cen-
tury: a fundamental role in formulating and popularising
the new current of research on the ideological content of
medieval architecture was played by Günter Bandmanns
habilitation thesis written in 1951, tersely but eloquently
titled Mittelalterliche Architektur als Bedeutungsträger,
which went into several editions in Germany and was
translated into many languages.36 In this comprehensive
study, whose timeframe reaches back to, in some cases, the
twilight of the prehistoric era, Bandmann distinguished
the fundamental types of meaning ascribed to works of
architecture: (1) the aesthetic meaning; (2) the symbolic

meaning, i.e. the allegorical meaning, referring directly to
a set of motifs derived from the Bible and to the entire leg-
acy of Christian writers; (3) the historical meaning, which
links the given structure with the place and time of its
construction and the intentions of its creators (undoubt-
edly the most interesting aspect from the point of view of
modern historiography). As critically highlighted by Paul
Crossley, Bandmann based his reflections exclusively on
pre-Gothic architecture, mostly focusing on the territory
of the Holy Roman Empire and on a few selected types of
buildings. Also, regrettably, he introduced some abstract
terms, such as Kaisermetaphysik and Reichsmetaphysik,
which had nothing to do with the historical facts and were
rejected by later scholars.37 His attempt to ascribe definite
and immutable symbolic meanings to various types of ed-
ifices or their parts - meanings that were allegedly clear to
the original sponsors and users of the buildings, in spite of
the diversity within this group - also proved highly prob-
lematic.
For these reasons Bandmanns study was unable to
offer a homogeneous system of analytical concepts that
could easily be transformed into a consistent method of
researching medieval architecture. More importantly,
however, the book aroused the medievalists’ interest in the
“historicity” of buildings, that is, in the complex system of
meanings pertaining to politics, religion and social life as-
cribed to them by their sponsors or patrons and clear to
at least the best educated of their original users.38 Impor-
tantly and characteristically, the “iconographers” of archi-
tecture sought to establish the connections between the
architectural shape of a building and its various functions,
including its propagandistic purpose. The fundamental
difficulties in conducting such research lie in the usually
incomplete or, in fact, vestigial relevant written sources
and in the need to apply truly interdisciplinary research
tools. This is because a well-argued proposal of how the
original ideological message of a medieval edifice should
be interpreted requires a very good orientation in politi-
cal history (including ecclesiastic history), economic his-
tory, social history and the history of culture; familiarity
with the history of law, heraldry, the history of liturgy and
various ceremonies, and often also literature and music is
indispensable as well. In addition, it would be a truism to
state that this “superstructure” of historical and symbolic
interpretations must be founded on an immutable “base”
consisting of close familiarity with the material structure
of the building, the stratification of the construction phas-
es and their absolute dating, often determined by means
of archeological methods. A researcher - especially one
working on their own! - is thus faced with various threats
and difficulties. Still, Bandmanns book, which constitutes
the quintessence of the “iconographie breakthrough” of
the mid-20th century, very effectively encouraged subse-
quent generations of art historians to enter the universe