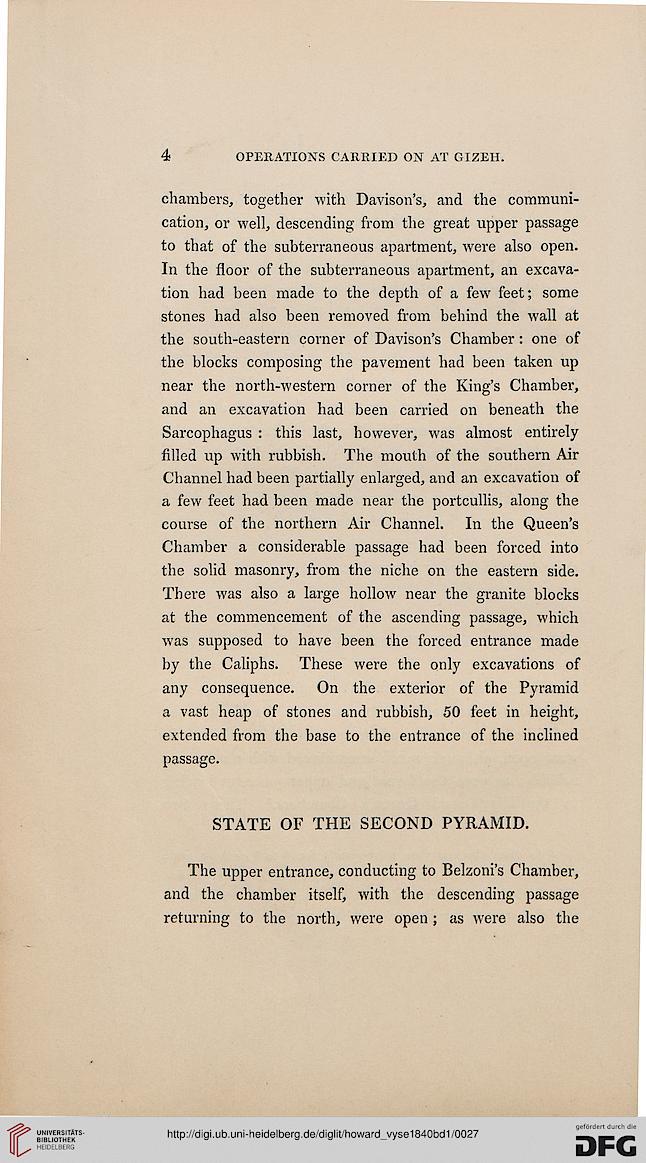 OPERATIONS CARRIED ON AT GIZEH.

chambers, together with Davison's, and the communi-
cation, or well, descending from the great upper passage
to that of the subterraneous apartment, were also open.
In the floor of the subterraneous apartment, an excava-
tion had been made to the depth of a few feet; some
stones had also been removed from behind the wall at
the south-eastern corner of Davison's Chamber : one of
the blocks composing the pavement had been taken up
near the north-western corner of the King's Chamber,
and an excavation had been carried on beneath the
Sarcophagus : this last, however, was almost entirely
filled up with rubbish. The mouth of the southern Air
Channel had been partially enlarged, and an excavation of
a few feet had been made near the portcullis, along the
course of the northern Air Channel. In the Queen's
Chamber a considerable passage had been forced into
the solid masonry, from the niche on the eastern side.
There was also a large hollow near the granite blocks
at the commencement of the ascending passage, which
was supposed to have been the forced entrance made
by the Caliphs. These were the only excavations of
any consequence. On the exterior of the Pyramid
a vast heap of stones and rubbish, 50 feet in height,
extended from the base to the entrance of the inclined
passage.

STATE OF THE SECOND PYRAMID.

The upper entrance, conducting to Belzoni's Chamber,
and the chamber itself, with the descending passage
returning to the north, were open ; as were also the