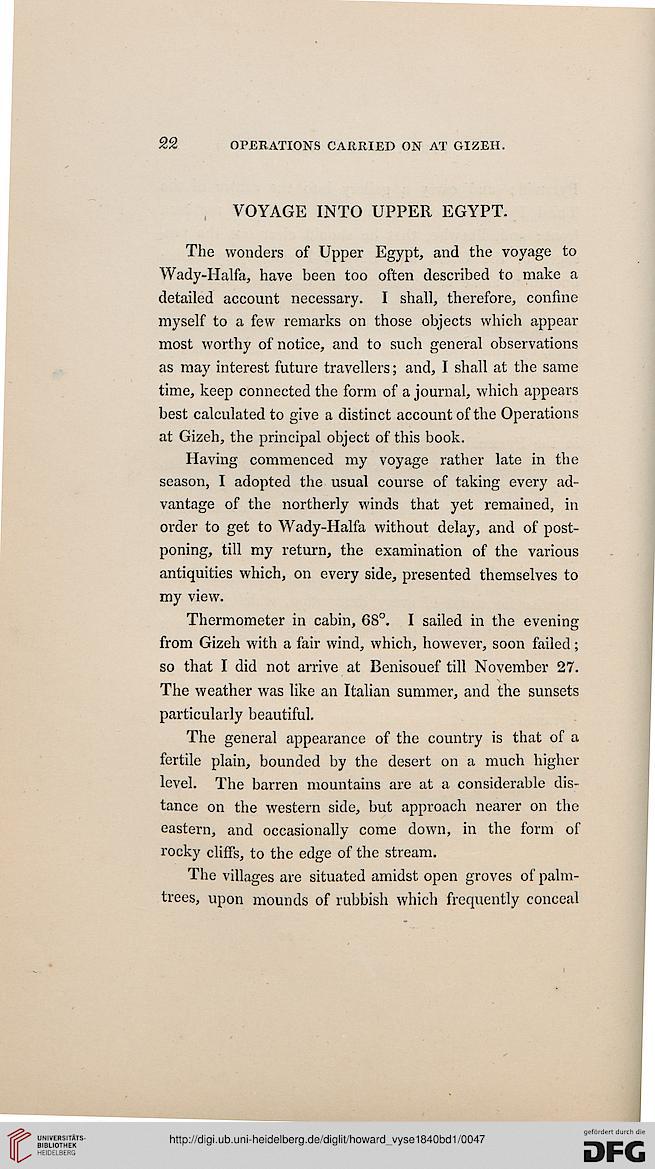 OPERATIONS CARRIED ON AT GIZEH.

The wonders of Upper Egypt, and the voyage to
Wady-Halfa, have been too often described to make a
detailed account necessary. I shall, therefore, confine
myself to a few remarks on those objects which appear
most worthy of notice, and to such general observations
as may interest future travellers; and, I shall at the same
time, keep connected the form of a journal, which appears
best calculated to give a distinct account of the Operations
at Gizeh, the principal object of this book.

Having commenced my voyage rather late in the
season, I adopted the usual course of taking every ad-
vantage of the northerly winds that yet remained, in
order to get to Wady-Halfa without delay, and of post-
poning, till my return, the examination of the various
antiquities which, on every side, presented themselves to
my view.

Thermometer in cabin, 68°. I sailed in the evening
from Gizeh with a fair wind, which, however, soon failed ;
so that I did not arrive at Benisouef till November 27.
The weather was like an Italian summer, and the sunsets
particularly beautiful.

The general appearance of the country is that of a
fertile plain, bounded by the desert on a much higher
level. The barren mountains are at a considerable dis-
tance on the western side, but approach nearer on the
eastern, and occasionally come down, in the form of
rocky cliffs, to the edge of the stream.

The villages are situated amidst open groves of palm-
trees, upon mounds of rubbish which frequently conceal