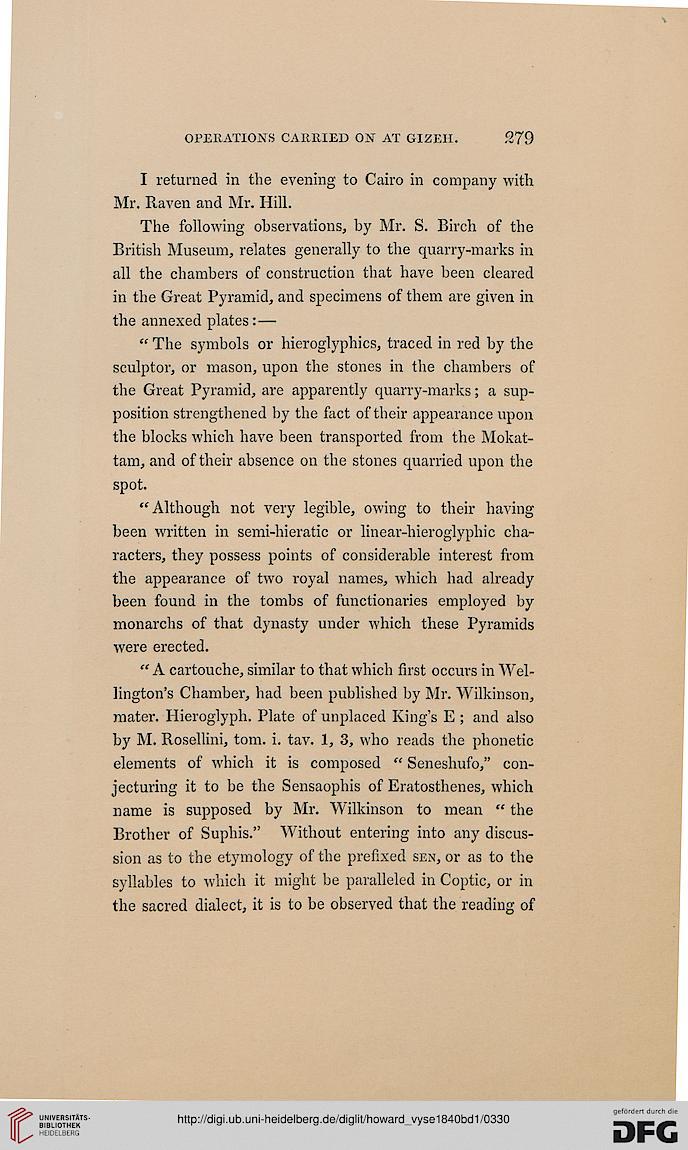 Information about OCR text
OPERATIONS CARRIED ON AT GIZEII.

I returned in the evening to Cairo in company with
Mr. Raven and Mr. Hill.

The following observations, by Mr. S. Birch of the
British Museum, relates generally to the quarry-marks in
all the chambers of construction that have been cleared
in the Great Pyramid, and specimens of them are given in
the annexed plates : —

" The symbols or hieroglyphics, traced in red by the
sculptor, or mason, upon the stones in the chambers of
the Great Pyramid, are apparently quarry-marks; a sup-
position strengthened by the fact of their appearance upon
the blocks which have been transported from the Mokat-
tam, and of their absence on the stones quarried upon the
spot.

"Although not very legible, owing to their having
been written in semi-hieratic or linear-hieroglyphic cha-
racters, they possess points of considerable interest from
the appearance of two royal names, which had already
been found in the tombs of functionaries employed by
monarchs of that dynasty under which these Pyramids
were erected.

" A cartouche, similar to that which first occurs in Wel-
lington's Chamber, had been published by Mr. Wilkinson,
mater. Hieroglyph. Plate of unplaced King's E ; and also
by M. Rosellini, torn. i. tav. 1, 3, who reads the phonetic
elements of which it is composed " Seneshufo," con-
jecturing it to be the Sensaophis of Eratosthenes, which
name is supposed by Mr. Wilkinson to mean " the
Brother of Suphis." Without entering into any discus-
sion as to the etymology of the prefixed sen, or as to the
syllables to which it might be paralleled in Coptic, or in
the sacred dialect, it is to be observed that the reading of