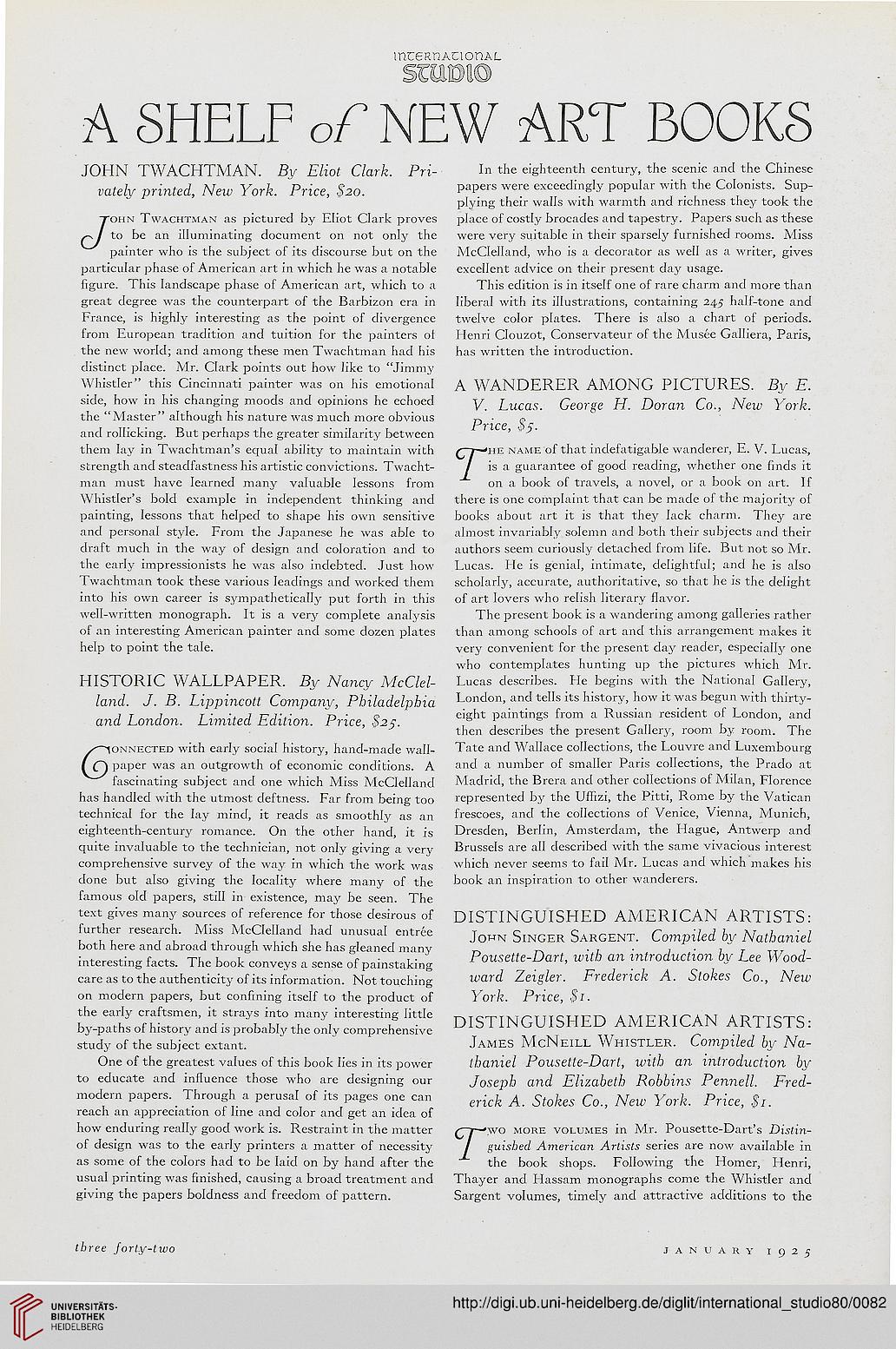 A 8HELP of NEW ART BOOKS

Tohn Twachtman as pictured by Eliot Clark proves
p/ to be an illuminating document on not only the
painter who is the subject of its discourse but on the
particular phase of American art in which he was a notable
figure. This landscape phase of American art, which to a
great degree was the counterpart of the Barbizon era in
France, is highly interesting as the point of divergence
from European tradition and tuition for the painters ot
the new world; and among these men Twachtman had his
distinct place. Mr. Clark points out how like to "Jimmy
Whistler" this Cincinnati painter was on his emotional
side, how in his changing moods and opinions he echoed
the "Master" although his nature was much more obvious
and rollicking. But perhaps the greater similarity between
them lay in Twachtman's equal ability to maintain with
strength and steadfastness his artistic convictions. Twacht-
man must have learned many valuable lessons from
Whistler's bold example in independent thinking and
painting, lessons that helped to shape his own sensitive
and personal style. From the Japanese he was able to
draft much in the way of design and coloration and to
the early impressionists he was also indebted. Just how
Twachtman took these various leadings and worked them
into his own career is sympathetically put forth in this
well-written monograph. It is a very complete analysis
of an interesting American painter and some dozen plates
help to point the tale.

onnected with early social history, hand-made wall-
paper was an outgrowth of economic conditions. A
fascinating subject and one which Miss McClelland
has handled with the utmost deftness. Far from being too
technical for the lay mind, it reads as smoothly as an
eighteenth-century romance. On the other hand, it is
quite invaluable to the technician, not only giving a very-
comprehensive survey of the way in which the work was
done but also giving the locality where many of the
famous old papers, still in existence, may be seen. The
text gives many sources of reference for those desirous of
further research. Miss McClelland had unusual entree
both here and abroad through which she has gleaned many
interesting facts. The book conveys a sense of painstaking
care as to the authenticity of its information. Not touching
on modern papers, but confining itself to the product of
the early craftsmen, it strays into many interesting little
by-paths of history and is probably the only comprehensive
study of the subject extant.

One of the greatest values of this book lies in its power
to educate and influence those who are designing our
modern papers. Through a perusal of its pages one can
reach an appreciation of line and color and get an idea of
how enduring really good work is. Restraint in the matter
of design was to the early printers a matter of necessity
as some of the colors had to be laid on by hand after the
usual printing was finished, causing a broad treatment and
giving the papers boldness and freedom of pattern.

In the eighteenth century, the scenic and the Chinese
papers were exceedingly popular with the Colonists. Sup-
plying their walls with warmth and richness they took the
place of costly brocades and tapestry. Papers such as these
were very suitable in their sparsely furnished rooms. Miss
McClelland, who is a decorator as well as a writer, gives
excellent advice on their present day usage.

This edition is in itself one of rare charm and more than
liberal with its illustrations, containing 245 half-tone and
twelve color plates. There is also a chart of periods.
Henri Clouzot, Conservateur of the Musee Galliera, Paris,
has written the introduction.

riiE name of that indefatigable wanderer, E. V. Lucas,
is a guarantee of good reading, whether one finds it
on a book of travels, a novel, or a book on art. If
there is one complaint that can be made of the majority of
books about art it is that they lack charm. They are
almost invariably solemn and both their subjects and their
authors seem curiously detached from life. But not so Mr.
Lucas. He is genial, intimate, delightful; and he is also
scholarly, accurate, authoritative, so that he is the delight
of art lovers who relish literary flavor.

The present book is a wandering among galleries rather
than among schools of art and this arrangement makes it
very convenient for the present day reader, especially one
who contemplates hunting up the pictures which Mr.
Lucas describes. He begins with the National Gallery,
London, and tells its history, how it was begun with thirty-
eight paintings from a Russian resident of London, and
then describes the present Gallery, room by room. The
Tate and Wallace collections, the Louvre and Luxembourg
and a number of smaller Paris collections, the Prado at
Madrid, the Brera and other collections of Milan, Florence
represented by the Uffizi, the Pitti, Rome by the Vatican
frescoes, and the collections of Venice, Vienna, Munich,
Dresden, Berlin, Amsterdam, the Hague, Antwerp and
Brussels are all described with the same vivacious interest
which never seems to fail Mr. Lucas and which makes his
book an inspiration to other wanderers.