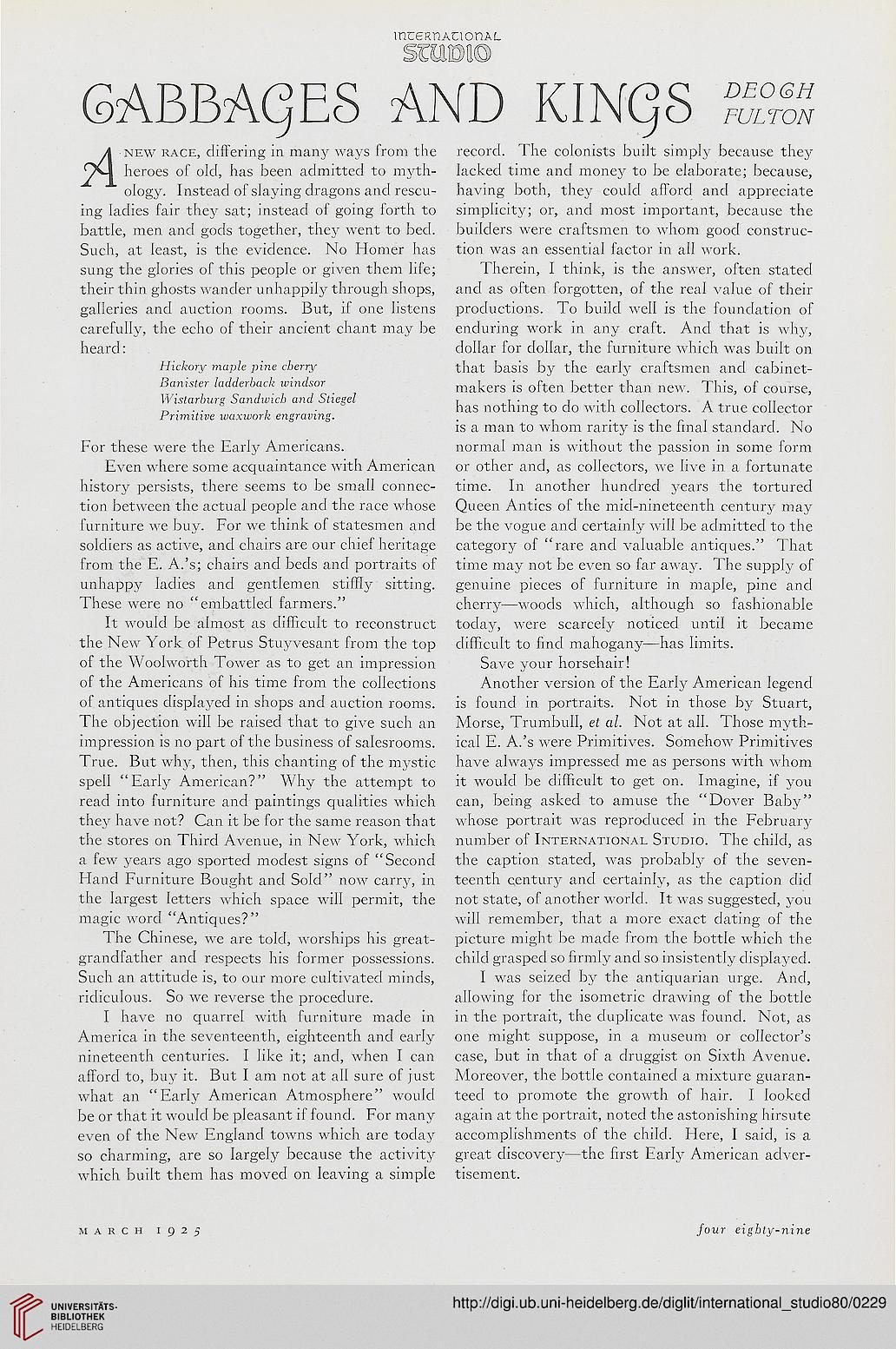 A new race, differing in many ways from the record. The colonists built simply because they

0^-1 heroes of old, has been admitted to myth- lacked time anci money to be elaborate; because,

ology. Instead of slaying dragons and rescu- having both, they could afford and appreciate

ing ladies fair they sat; instead of going forth to simplicity; or, and most important, because the

battle, men and gods together, they went to bed. builders were craftsmen to whom good construc-

Such, at least, is the evidence. No Homer has tion was an essential factor in all work,

sung the glories of this people or given them life; Therein, I think, is the answer, often stated

their thin ghosts wander unhappily through shops, and as often forgotten, of the real value of their

galleries and auction rooms. But, if one listens productions. To build well is the foundation of

carefully, the echo of their ancient chant may be enduring work in any craft. And that is why,

heard: dollar for dollar, the furniture which was built on

Hickory maple pine cherry that basis by the early craftsmen and cabinet-
makers is often better than new. This, of course,
has nothing to do with collectors. A true collector
is a man to whom rarity is the final standard. No

For these were the Early Americans. normal man is without the passion in some form

Even where some acquaintance with American or other and, as collectors, we live in a fortunate

history persists, there seems to be small connec- time. In another hundred years the tortured

furniture we buy. For we think of statesmen and be the vogue and certainly will be admitted to the

soldiers as active, and chairs are our chief heritage category of "rare and valuable antiques." That

from the E. A.'s; chairs and beds and portraits of time may not be even so far away. The supply of

These were no "embattled farmers." cherry—woods which, although so fashionable

It would be almost as difficult to reconstruct today, were scarcely noticed until it became

the New York of Petrus Stuyvesant from the top difficult to find mahogany—has limits,

of the Woolworth Tower as to get an impression Save your horsehair!

of the Americans of his time from the collections Another version of the Early American legend
of antiques displayed in shops and auction rooms, is found in portraits. Not in those by Stuart,
The objection will be raised that to give such an Morse, Trumbull, et al. Not at all. Those myth-
impression is no part of the business of salesrooms, ical E. A.'s were Primitives. Somehow Primitives
True. But why, then, this chanting of the mystic have always impressed me as persons with whom
spell "Early American?" Why the attempt to it would be difficult to get on. Imagine, if you
read into furniture and paintings qualities which can, being asked to amuse the "Dover Baby"
they have not? Can it be for the same reason that whose portrait was reproduced in the February
the stores on Third Avenue, in New York, which number of International Studio. The child, as
a few years ago sported modest signs of "Second the caption stated, was probably of the seven-
Hand Furniture Bought and Sold" now carry, in teenth century and certainly, as the caption did
the largest letters which space will permit, the not state, of another world. It was suggested, you
magic word "Antiques?" will remember, that a more exact dating of the

The Chinese, we are told, worships his great- picture might be made from the bottle which the

grandfather and respects his former possessions, child grasped so firmly and so insistently displayed.

Such an attitude is, to our more cultivated minds, I was seized by the antiquarian urge. And,

ridiculous. So we reverse the procedure. allowing for the isometric drawing of the bottle

I have no quarrel with furniture made in in the portrait, the duplicate was found. Not, as

America in the seventeenth, eighteenth and early one might suppose, in a museum or collector's

nineteenth centuries. I like it; and, when I can case, but in that of a druggist on Sixth Avenue,

afford to, buy it. But I am not at all sure of just Moreover, the bottle contained a mixture guaran-

what an "Early American Atmosphere" would teed to promote the growth of hair. I looked

be or that it would be pleasant if found. For many again at the portrait, noted the astonishing hirsute

even of the New England towns which are today accomplishments of the child. Here, I said, is a

so charming, are so largely because the activity great discovery—the first Early American adver-

which built them has moved on leaving a simple tisement.