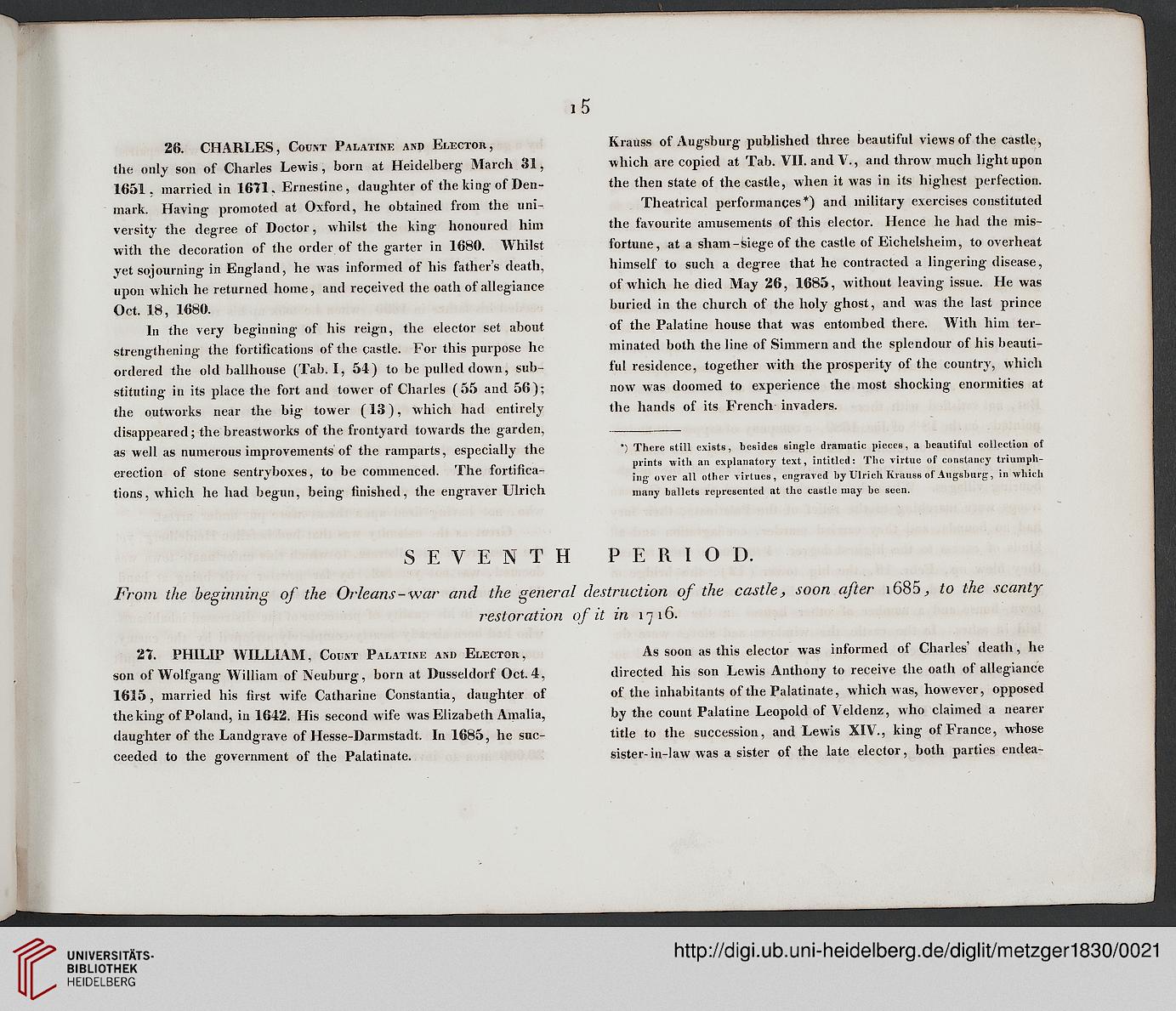 Information about OCR text
i5

26. CHARLES, Count Palatini: and Elector,
the only son of Charles Lewis, born at Heidelberg March 31,
1651. married in 1611. Ernestine, daughter of the king of Den-
mark. Having promoted at Oxford, he obtained from the uni-
versity the degree of Doctor, whilst the king honoured him
with the decoration of the order of the garter in 1680. Whilst
yet sojourning in England, he was informed of his father's death,
upon which he returned home, and received the oath of allegiance
Oct. 18, 1680.

In the very beginning of his reign, the elector set about
strengthening the fortifications of the castle. For this purpose he
ordered the old ballhouse (Tab. I, 54) to be pulled down, sub-
stituting in its place the fort and tower of Charles (55 and 56);
the outworks near the big tower (13), which had entirely
disappeared; the breastworks of the frontyard towards the garden,
as well as numerous improvements of the ramparts, especially the
erection of stone sentryboxes, to be commenced. The fortifica-
tions, which he had begun, being finished, the engraver Ulrich

Krauss of Augsburg published three beautiful views of the castle,
which are copied at Tab. VII. and V., and throw much light upon
the then state of the castle, when it was in its highest perfection.

Theatrical performances*) and military exercises constituted
the favourite amusements of this elector. Hence he had the mis-
fortune, at a sham-siege of the castle of Eichelsheim, to overheat
himself to such a degree that he contracted a lingering disease,
of which he died May 26, 1685, without leaving issue. He was
buried in the church of the holy ghost, and was the last prince
of the Palatine house that was entombed there. With him ter-
minated both the line of Simmern and the splendour of his beauti-
ful residence, together with the prosperity of the country, which
now was doomed to experience the most shocking enormities at
the hands of its French invaders.

*) There still exists, besides single dramatic pieces, a beautiful collection of
prints with an explanatory text, intitled: The virtue of constancy triumph-
ing over all other virtues, engraved by Ulrich Krauss of Augsburg, in ■which
many ballets represented at the castle may be seen.

From the beginning of the Orleans-war and the general destruction of the castle, soon after i685^ to the scanty

27. PHILIP WILLIAM, Count Palatine and Elector,
son of Wolfgang William of Neuburg, born at Dusseldorf Oct. 4,
1615 , married his first wife Catharine Constantia, daughter of
the king of Poland, in 1642. His second wife was Elizabeth Amalia,
daughter of the Landgrave of Hesse-Darmstadt. In 1685, he suc-
ceeded to the government of the Palatinate.

As soon as this elector was informed of Charles' death, he
directed his son Lewis Anthony to receive the oath of allegiance
of the inhabitants of the Palatinate, which was, however, opposed
by the count Palatine Leopold of Veldenz, who claimed a nearer
title to the succession, and Lewis XIV., king of France, whose
sister- in-law was a sister of the late elector, both parties endea-