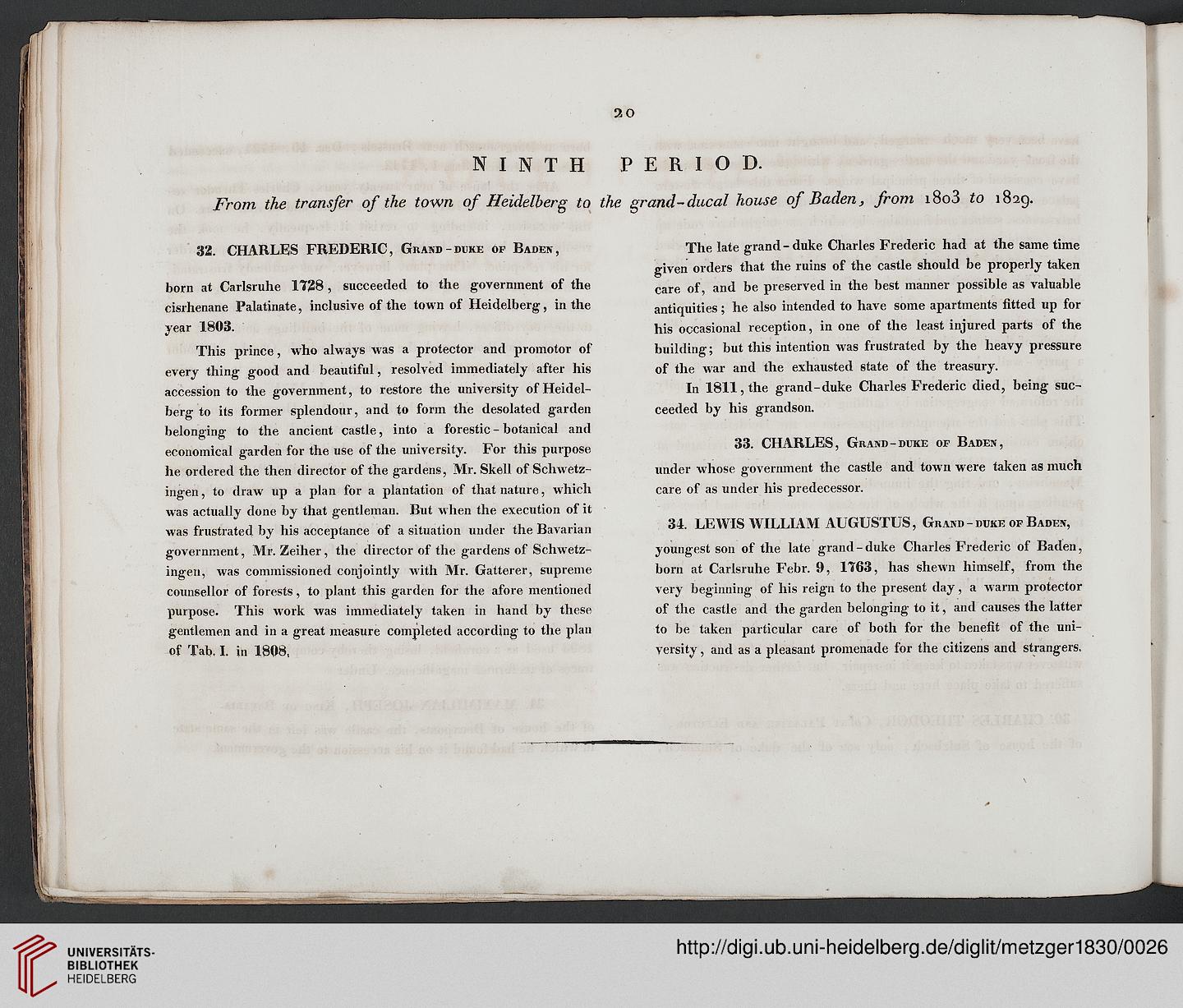 From the transfer of the town of Heidelberg to

born at Carlsruhe 1728, succeeded to the government of the
cisrhenane Palatinate, inclusive of the town of Heidelberg, in the
year 1803.

This prince, who always was a protector and promotor of
every thing good and beautiful, resolved immediately after his
accession to the government, to restore the university of Heidel-
berg to its former splendour, and to form the desolated garden
belonging to the ancient castle, into a forestic - botanical and
economical garden for the use of the university. For this purpose
he ordered the then director of the gardens, Mr. Skell of Schwetz-
ingen, to draw up a plan for a plantation of that nature, which
was actually done by that gentleman. But when the execution of it
was frustrated by his acceptance of a situation under the Bavarian
government, Mr. Zeiher, the director of the gardens of Schwetz-
ingen, was commissioned conjointly with Mr. Gatterer, supreme
counsellor of forests, to plant this garden for the afore mentioned
purpose. This work was immediately taken in hand by these
gentlemen and in a great measure completed according to the plan
of Tab. I. in 1808,

The late grand-duke Charles Frederic had at the same time
given orders that the ruins of the castle should be properly taken
care of, and be preserved in the best manner possible as valuable
antiquities; he also intended to have some apartments fitted up for
his occasional reception, in one of the least injured parts of the
building; but this intention was frustrated by the heavy pressure
of the war and the exhausted state of the treasury.

In 1811, the grand-duke Charles Frederic died, being suc-
ceeded by his grandson.

under whose government the castle and town were taken as much
care of as under his predecessor.

youngest son of the late grand-duke Charles Frederic of Baden,
born at Carlsruhe Febr. 9, 1163, has shewn himself, from the
very beginning of his reign to the present day, a warm protector
of the castle and the garden belonging to it, and causes the latter
to be taken particular care of both for the benefit of the uni-
versity , and as a pleasant promenade for the citizens and strangers.