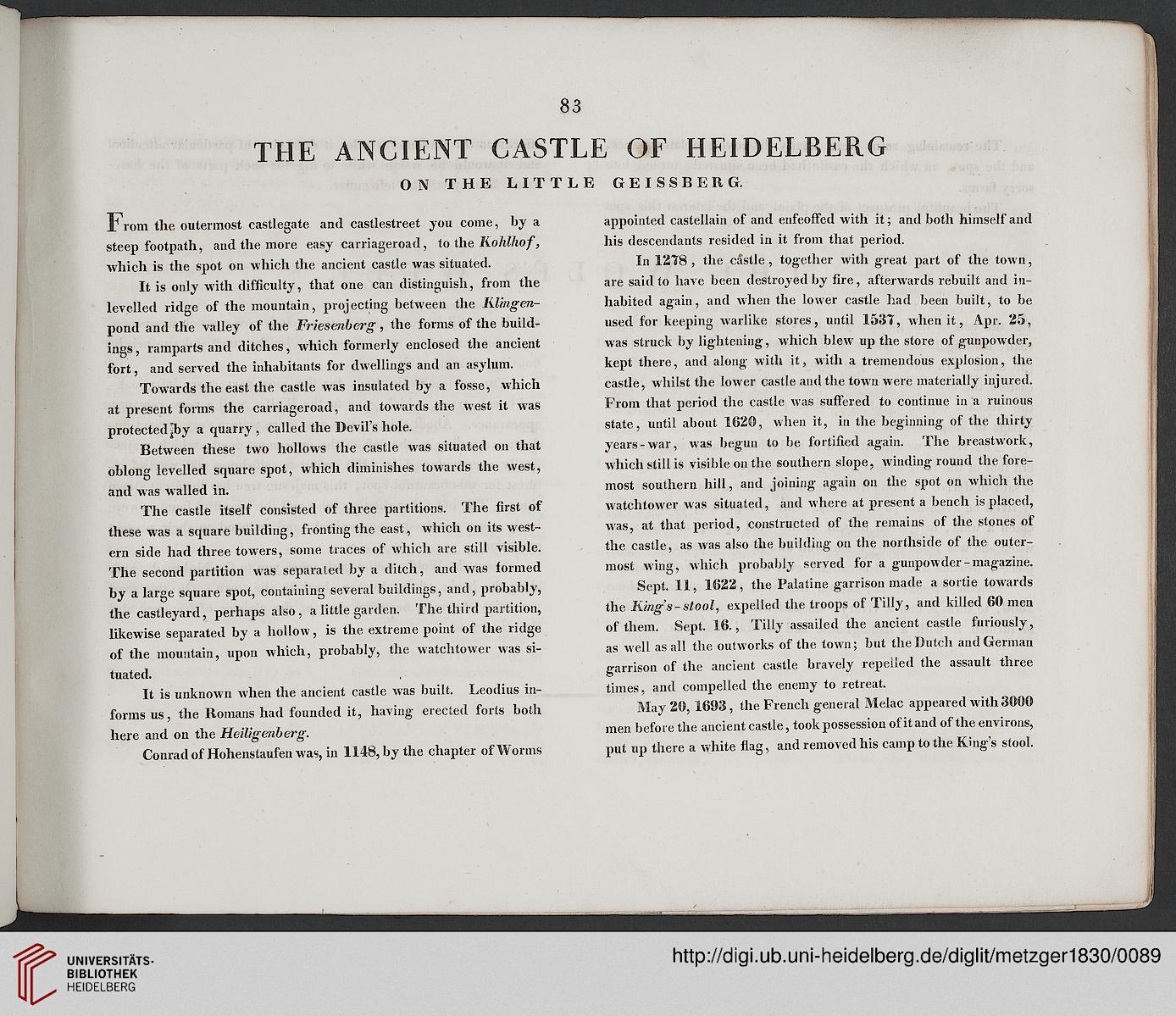 THE ANCIENT CASTLE OF HEIDELBERG

From the outermost castlegate and castlestreet you come, by a
steep footpath, and the more easy carriageroad, to the Kohlhof,
which is the spot on which the ancient castle was situated.

It is only with difficulty, that one can distinguish, from the
levelled ridge of the mountain, projecting between the Klingen-
pond and the valley of the Friesenberg, the forms of the build-
ings , ramparts and ditches, which formerly enclosed the ancient
fort, and served the inhabitants for dwellings and an asylum.

Towards the east the castle was insulated by a fosse, which
at present forms the carriageroad, and towards the west it was
protectedpby a quarry , called the Devil's hole.

Between these two hollows the castle was situated on that
oblong levelled square spot, which diminishes towards the west,
and was walled in.

The castle itself consisted of three partitions. The first of
these was a square building, fronting the east, which on its west-
ern side had three towers, some traces of which are still visible.
The second partition was separated by a ditch, and was formed
by a large square spot, containing several buildings, and, probably,
the castleyard, perhaps also, a little garden. The third partition,
likewise separated by a hollow, is the extreme point of the ridge
of the mountain, upon which, probably, the watchtower was si-
tuated.

It is unknown when the ancient castle was built. Leodius in-
forms us, the Romans had founded it, having erected forts both
here and on the Heiligenberg.

Conrad of Hohenstaufen was, in 1148, by the chapter of Worms

appointed castellain of and enfeoffed with it; and both himself and
his descendants resided in it from that period.

In 1278, the castle , together with great part of the town,
are said to have been destroyed by fire, afterwards rebuilt and in-
habited again, and when the lower castle had been built, to be
used for keeping warlike stores, until 1537, when it, Apr. 25,
was struck by lightening, which blew up the store of gunpowder,
kept there, and along with it, with a tremendous explosion, the
castle, whilst the lower castle and the town were materially injured.
From that period the castle was suffered to continue in a ruinous
state, until about 1620, when it, in the beginning of the thirty
years-war, was begun to be fortified again. The breastwork,
which still is visible on the southern slope, winding round the fore-
most southern hill, and joining again on the spot on which the
watchtower was situated, and where at present a bench is placed,
was, at that period, constructed of the remains of the stones of
the castle, as was also the building on the northside of the outer-
most wing, which probably served for a gunpowder-magazine.

Sept. 11, 1622, the Palatine garrison made a sortie towards
the King's-stool, expelled the troops of Tilly, and killed 60 men
of them. Sept. 16., Tilly assailed the ancient castle furiously,
as well as all the outworks of the town; but the Dutch and German
garrison of the ancient castle bravely repelled the assault three
times, and compelled the enemy to retreat.

May 20,1693, the French general Melac appeared with 3000
men before the ancient castle, took possession of it and of the environs,
put up there a white flag, and removed his camp to the King's stool.