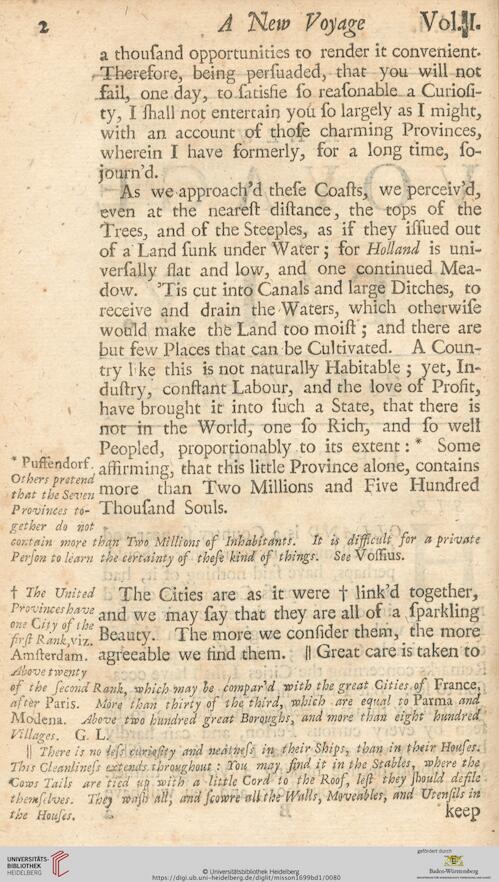 Information about OCR text
2 A New Voyage Vol.jl.
a thousand opportunities to render it convenient-
Therefore, being persuaded, that you will not
.fail, one day, to latisfie so reasonable a Curiosi-
ty, I shall not entertain you so largely as I might,
with an account of those charming Provinces,
wherein I have formerly, for a long time, so-
journ’d.
As we approach’d these Coasts, we perceiv’d,
even at the nearest distance, the tops of the
Trees, and of the Steeples, as if they issued out
of a Land sunk under Water ; for Holland is uni-
versally ssat and low, and one continued Mea-
dow. ’Tis cut into Canals and large Ditches, to
receive and drain the Waters, which otherwise
would make the Land too moist ; and there are
but few Places that can be Cultivated. A Coun-
try I ke this is not naturally Habitable ; yet, In-
dustry, conftant Labour, and the love of Profit,
» have brought it into such a State, that there is
not in the World, one so Rich, and so well
Peopled, proportionably to its extent:* Some
’ PuftendorL assirming, that this little Province alone, contains
that'the seven more than Two Millions and Five Hundred
Provinces to- Thousand Souls.
gether do not , .... . . ,-v
contain more than Two Millions of Inhabitants. It is dissicult sor a private
Pers on to learn the certainty os thefe kind os things. SreVossius.
+ The United The Cities are as it were f link’d together,
Provinces have anj we may say that they are all of a sparkling
srft Rank,viz. Beauty. The more we consider them, the more
Amferdam. agreeable we find them. II Great care is taken to
Above twenty ' , . ;
os the second Rank, which way be compar'd with the great Cities of hranca,
aster Paris. More than thirty os the third, which are equal to ffaxma. and
Modena, Above two hundred great Boroughs, and more than eight hundred
Pillages. G. L.
|| There is no lest cilriassty and nedtness in their Ships, than in their Houses.
This Cleanliness extends, throughout : Ton may sind it m the Stables, where the
SGows Tails are tied up with a little Cord to the Roos, less they jbould desile
themselves. They wafiall; and scowre all the- Walls, Moveables, and Utensilsin
the Houfis. z. L keep