Misson, François Maximilien; Goodwin, Timothy [Bearb.]; Wotton, Matthew [Bearb.]; Manship, Samuel [Bearb.]; Tooke, Benjamin [Bearb.]
A New Voyage to Italy: With Curious Observations On several other Countries, as Germany, Switzerland, Savoy, Geneva, Flanders, and Holland. Together, With Useful Instructions for those who shall Travel thither. Done out of French. In Two Volumes (Vol. I.) — London: Printed for T. Goodwin, at the Queen's-Head; M. Wotton, at the Three-Daggers in Fleet-street; S. Manship, at the Ship in Cornbil; and B. Took at the Middle-Temple-Gate in Fleet-street, 1699 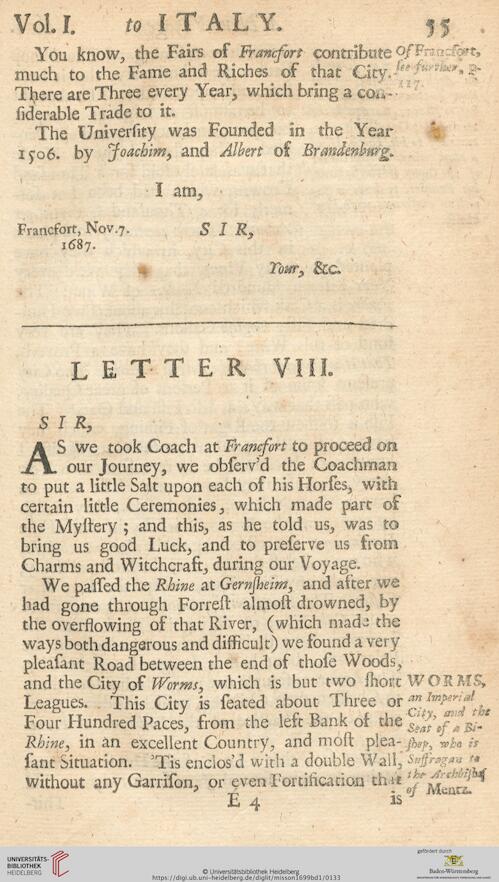 Hinweise zum OCR-Text
Vol.I. to ITALY.
You know, the Fairs os Framsort contributed/^''
much to the Fame and Riches of that City.
There are Three every Year, which bring a cou-
siderable Trade to it.
The University was Founded in the Year
i jo6. by Joachim, and Albert of Brandenburg.
I am,
Francfort, Nov.7. SIR,
1687.
Tbar, &c.

SIR,
AS we took Coach at Francsort to proceed on
our Journey, we observ’d the Coachman
to put a little Salt upon each of his Horses, with
certain little Ceremonies, which made part os
the Myltery ; and this, as he told us, was to
bring us good Luck, and to preserve us from
Charms and Witchcraft, during our Voyage.
We passed the Rhine at Gernjheim, and after we
had gone through Forrest al molt drowned, by
the overssowing of that River, (which made the
ways both dangerous and difficult) we found a very
pleasant Road between the end of those Woods,
and the City of Worms, which is but two thort WORMS,
Leagues. This City is seated about Three or ?
Four Hundred Paces, from the left Bank of the
Rhine, in an excellent Country, and molt plea- sspy ty
sant Situation. ’Tis enclos’d with a double Wall,
without any Garrison, or even Fortification chat
] -p . «Meara.
£> 4 IS