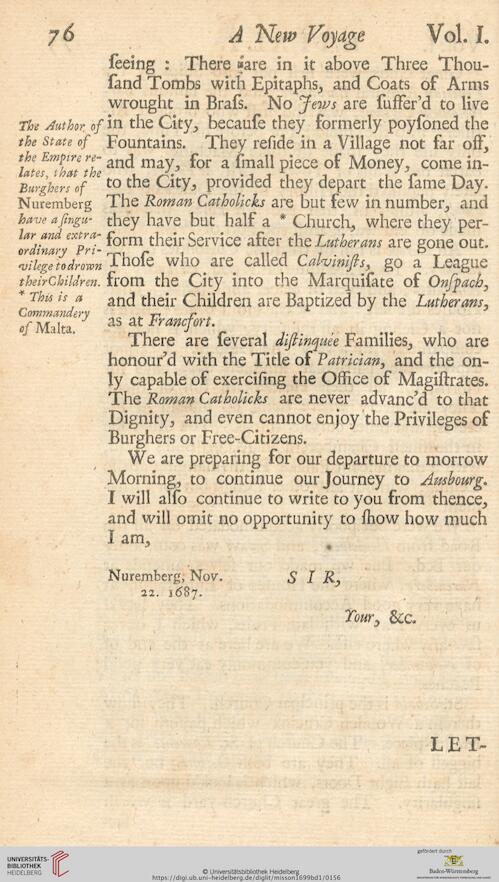 Information about OCR text
Fountains. They reside in a Village not far off,
and may, for a small piece of Money, come in-
to the City, provided they depart the same Day.
The Roman Catholicks are but few in number, and
they have but half a * Church, where they per-
'di'n 'ar ""pri- ^orrn ^crv’ce a^ter Lutherans are gone out.
<iiege to drown Those who are. called Cal'vinists,' go a League
J
and their Children are Baptized by the Lutherans,
as at Francfort.
There are several dijlinquee Families, who are
honour’d with the Title of Patrician, and the on-
ly capable of exercising the Office of Magistrates.
The Roman Catholicks are never advanc’d to that
Dignity, and even cannot enjoy the Privileges of
Burghers or Free-Citizens.
We are preparing for our departure to morrow
Morning, to continue our Journey to Ambourg.
I will also continue to write to you from thence,
and will omit no opportunity to show how much
I am,

76 A New Voyage Vol. I.
seeing : There «are in it above Three Thou-
sand Tombs with Epitaphs, and Coats of Arms
wrought in Brass. No Jews are suffer’d to live
The Author os in the City, because they formerly poysoned the
the State os ‘
the Empire re-
lates, that the
Burghers os
Nuremberg
have afingu-
lar and extra-
ordinary Pri-
theirChildren. from the City into the Marquisate of Onspach,
* This is a * ’ ' " " " ' ’ ' ’
Commandery
os Malta.