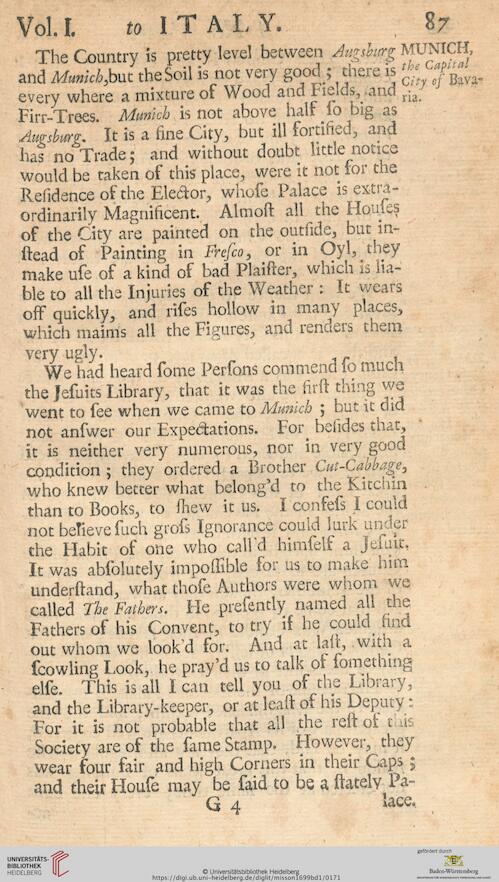 The Country is pretty level between Augsburg
and Munich,but the Soil is not very good ; there is
every where a mixture of Wood and Fields, and
Firr-Trees. Munich is not above half so big as
Augsburg. It is a fine City, but ill fortified, and
has no Trade; and without doubt little notice
would be taken of this place, were it not for the
Residence of the Elector, whose Palace is extra-
ordinarily Magnificent. Almost all the Houses
of the City are painted on the outside, but in-
stead of Painting in Fresco, or in Oyl, they
make use of a kind of bad Plaister, which is lia-
ble to all the Injuries of the Weather : It wears
osf quickly, and rises hollow in many places,
which maims all the Figures, and renders them
very ugly.
We had heard some Persons commend so much

the Jesuits Library, that it was the first thing we
went to see when we came to Munich ; but it did
not answer our Expectations. For besides that,
it is neither very numerous, nor in very good
condition ; they ordered a Brother Cut-Cabbage,
who knew better what belong’d to the Kitchin
than to Books, to shew it us. I confess I could
not believe such gross Ignorance could lurk under
the Habit of one who call’d himself a Jesuit,
It was abiblutely impossible for us to make him
understand, what those Authors were whom we
called The Fathers. Fie presently named all the
Fathers of his Convent, to try if he could find
out whom we look’d for. And at last, with a
scowling Look, he pray’d us to talk of something
else. This is all I can tell you of the Library,
and the Library-keeper, or at lead of his Deputy:
For it is not probable that all the rest of t iis
Society are of the same Stamp. However, they
wear four fair and high Corners in their Caps;
and their House may be said to be a (lately Pa-
G 4 lace.