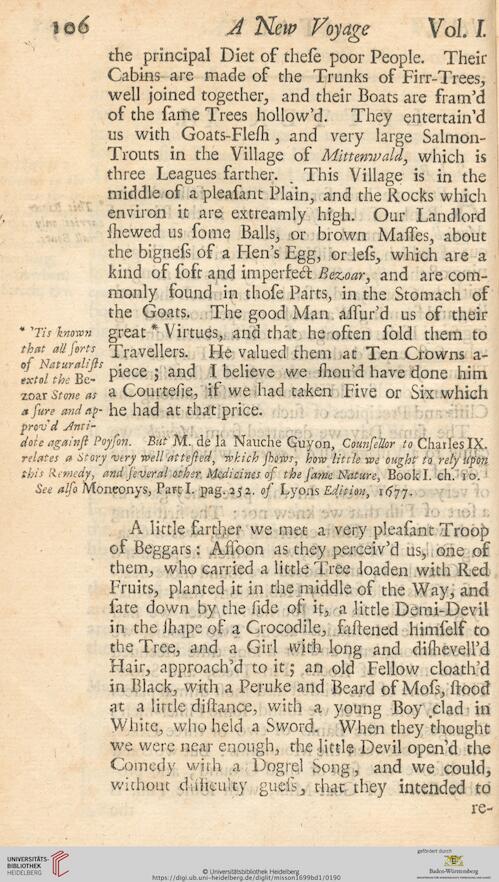 Information about OCR text
io6 A New Voyage Vol. I.
the principal Diet of these poor People. Their
Cabins are made of the Trunks of Firr-Trees,
well joined together, and their Boats are fram’d
of the same Trees hollow’d. They entertain’d
us with Goats-Flefli, and very large Salmon-
Trouts in the Village of Mittenwald, which is
three Leagues farther. , This Village is in the
middle of a pleasant Plain, and the Rocks which
environ it are extreamly high. Our Landlord
(hewed us some Balls, or brown Mattes, about
the bigness of a Hen’s Egg, or less, which are a
kind of soft and imperfedt Bezoar, and are com-
monly found in those Parts, in the Stomach of
the Goats. The good Man assur’d us of their
* 'Us known great * Virtues, and that he often sold them to
that all sorts Travellers. He valued them at Ten Crowns a-
piece 5 an<^ I believe we fliou’d have done him
Mar X a Courtesie, if we had taken Five or Six which
asuro andap- he had at that price.
prov'd jfriri-
dote againfi Poyfon. But M. de la Nauche Guyon, Counsellor to Charles IX.
relates a Story very well attessed, which JhoWs, how little we ought to relyiifon
this Remedy, and severed other Medicines os the same Nature, Book I. ch. I o.
See also Moneonys, Parti, pag. 151. os Lyons Edition, itoy-j.
A little farther we met a very pleasant Troop
of Beggars: Assoon as they perceiv’d us, one of
them, who carried a little Tree loaden with Red
Fruits, planted it in the middle of the Way, and
sate down by the side of it, a little Demi-Devil
in the lhape of a Crocodile, fattened himself to
the Tree, and a Girl with long and dilhevell’d
Hair, approach’d to it; an old Fellow cloath’d
in Black, with a Peruke and Beard of Moss, slood
at a little distance, with a young Boy .clad in
White, who held a Sword. When they thought
we were near enough, the little Devil open’d the
Comedy with aDogrel Song, and we could,
without diihculty guess, that they intended to
re-