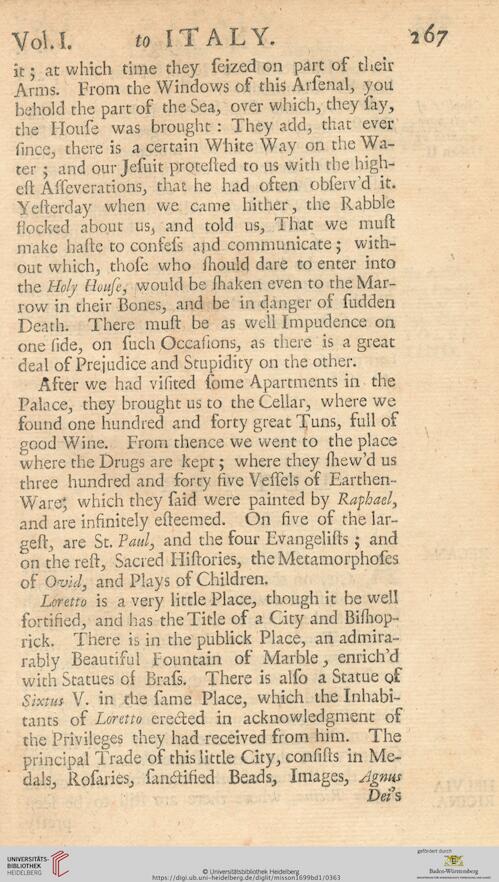 Information about OCR text
Vol.I. to ITALY. 267
it; at which time they seized on part of their
Arms. From the Windows of this Arsenal, you
behold the part of the Sea, over which., they say,
the House was brought : They add, that ever
since, there is a certain White Way on the Wa-
ter ; and our Jesuit protested to us with the high-
est Asseverations, that he had often observ’d it.
Yesterday when we came hither, the Rabble
flocked about us, and told us, That we must
make haste to confess and communicate; with-
out which, those who should dare to enter into
the Holy Houfe, would be fliaken even to the Mar-
row in their Bones, and be in danger of sudden
Death. There must be as well Impudence on
one side, on such Occasions, as there is a great
deal of Prejudice and Stupidity on the other.
After we had visited some Apartments in the
Palace, they brought us to the Cellar, where we
found one hundred and forty great Tuns, full of
good Wine. From thence we went to the place
where the Drugs are kept; where they shew’d us
three hundred and forty five Vessels of Earthen-
Ware^ which they said were painted by Raphael,
and are infinitely esteemed. On five of the lar-
gest, are St. 'Paul, and the four Evangelists ; and
on the rest, Sacred Histories, the Metamorphoses
of 0<vld, and Plays of Children.
Loretto is a very little Place, though it be well
fortisied, and has the Title of a City and Bishop-
rick. There is in the publick Place, an admira-
rably Beautiful Fountain of Marble, enrich’d
with Statues of Brass. There is also a Statue of
Sixtus V. in the same Place, which the Inhabi-
tants of Loretto erected in acknowledgment of
the Privileges they had received from him. The
principal Trade of this little City, consists in Me-
dals, Rosaries, sandified Beads, Images, signus
Dei’s