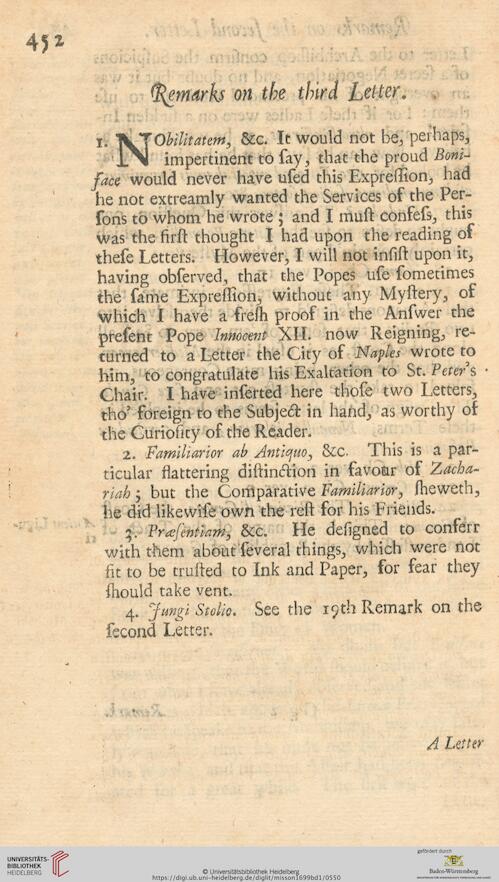 Information about OCR text
4P
Remarks on the third Letter. .
i. XTObilitatem, &c. It would not be, perhaps,
l/XI impertinent to say, that the proud Boni-
sace would never have used this Expression, had
he not extreamly wanted the Services of the Per-
sons to whom he wrote ; and I must confess, this
was the first thought I had upon the reading os
these Letters. However, I will not insist upon it,
having observed, that the Popes use sometimes
the same Expression, without any Mystery, of
which I have a fresti proof in the Answer the
present Pope Innocent XII. now Reigning, re-
turned to a Letter the City of Naples wrote to
him, to congratulate his Exaltation to St. Peters
Chair. I have inserted here those two Letters,
tho’ foreign to the Subject in hand, as worthy of
the Curiofity of the Reader.
2. Familiarior ab Antique, &c. This is a par-
ticular ssattering distinflion in favour of Zacha-
riah j but the Comparative Familiarior, sheweth,
he did likewise own the rest for his Friends.
Prafentiam, &c. He designed to conferr
with them about several things, which were not
fit to be trusted to Ink and Paper, for fear they
ssiould take vent.
4. sungi Stolio. See the 19th Remark on the
second Letter.