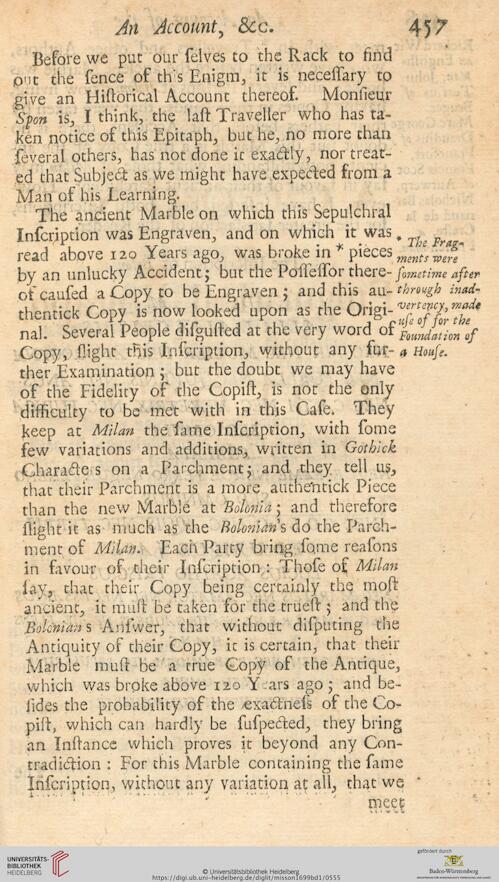 Information about OCR text
An Account, &c. 457
Before we put our selves to the Rack to find
put the sence of th's Enigra, it is necelsary to
give an Historical Account thereof. Monsieur
Span is, I think, the last Traveller who has ta-
ken notice of this Epitaph, but he, no more than
several others, has not done it exadly, nor treat-
ed that Subject as we might have expeded from a
Man of his Learning.
The ancient Marble on which this Sepulchral
Inscription was Engraven, and on which it was.
read above 120 Years ago, was broke in * pieces
by an unlucky Accident ; but the Posfessor there- simetime aster
of caused a Copy to be Engraven ; and this au- through inad-
thentick Copy is now looked upon as the Origi-
nal. Several People disgusted at the very word of
Copy, ssight this Inscription, without any sur- a House.
ther Examination ; but the doubt we may have
of the Fidelity of the Copist, is not the only
difficulty to be met with in this Case. They
keep at Milan the lame Inscription, with some
few variations and additions, written in Gothick
Charade s on a Parchment; and they tell us,
that their Parchment is a more authentick Piece
than the new Marble at Bolonia; and therefore
ssight it as much as the Bosnian's do the Parch-
ment of Milan. Each Party bring same reasons
in favour of their Inscription : Those os Milan
lay, that their Copy being certainly the most
ancient, it must be taken for the truest ; and the
Bola'nian s Answer, that without disputing the
Antiquity os their Copy, it is certain, that their
Marble must be a true Copy of the Antique,
which was broke above 120 Years ago; and be-
sides the probability of the -exadness of the Co-
pist, which can hardly be suspeded, they bring
an Instance which proves it beyond any Con-
tradidion : For this Marble containing the same
Inscription, without any variation at all, that we •
mcep