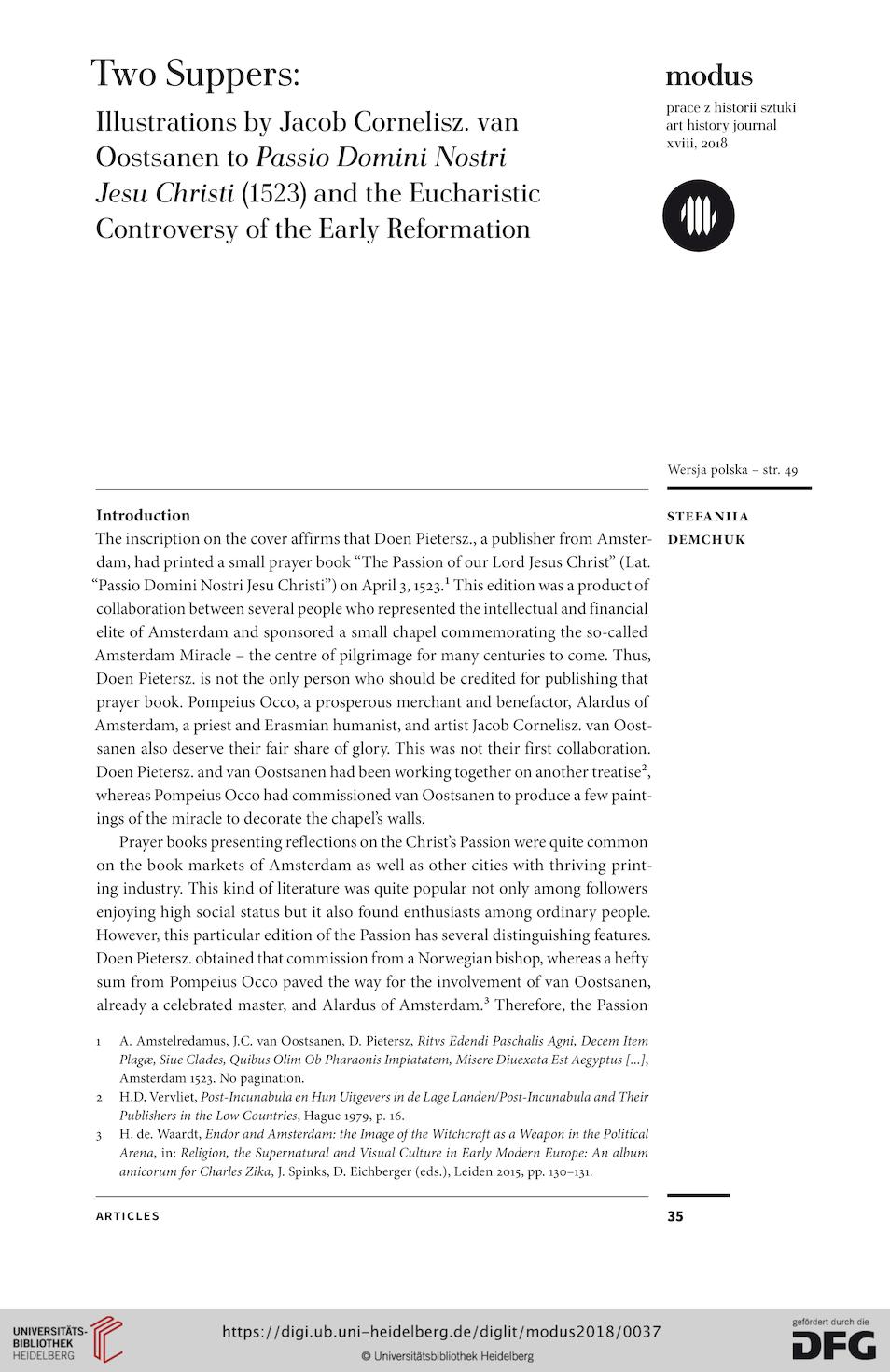 Introduction
The inscription on the cover affirms that Doen Pietersz., a publisher from Amster-
dam, had printed a smali prayer book “The Passion of our Lord Jesus Christ” (Lat.
“Passio Domini Nostri Jesu Christi”) on April 3,1523.1 This edition was a product of
collaboration between several people who represented the intellectual and financial
elite of Amsterdam and sponsored a smali chapel commemorating the so-called
Amsterdam Miracle - the centre of pilgrimage for many centuries to come. Thus,
Doen Pietersz. is not the only person who should be credited for publishing that
prayer book. Pompeius Occo, a prosperous merchant and benefactor, Alardus of
Amsterdam, a priest and Erasmian humanist, and artist Jacob Cornelisz. van Oost-
sanen also deserve their fair share of glory. This was not their First collaboration.
Doen Pietersz. and van Oostsanen had been working together on another treatise2,
whereas Pompeius Occo had commissioned van Oostsanen to produce a few paint-
ings of the miracle to decorate the chapels walls.
Prayer books presenting reflections on the Christ s Passion were quite common
on the book markets of Amsterdam as well as other cities with thriving print-
ing industry. This kind of literaturę was quite popular not only among followers
enjoying high social status but it also found enthusiasts among ordinary people.
However, this particular edition of the Passion has several distinguishing features.
Doen Pietersz. obtained that commission from a Norwegian bishop, whereas a hefty
sum from Pompeius Occo paved the way for the involvement of van Oostsanen,
already a celebrated master, and Alardus of Amsterdam.3 Therefore, the Passion
1 A. Amstelredamus, J.C. van Oostsanen, D. Pietersz, Ritvs Edendi Paschalis Agni, Decem Item
Plagce, Siue Clades, Quibus Olim Ob Pharaonis Impiatatem, Misere Diuexata Est Aegyptus [...],
Amsterdam 1523. No pagination.
2 H.D. Vervliet, Post-Incunabula en Hun Uitgevers in de Lagę Landen/Post-Incunabula and Their
Publishers in the Low Countries, Hague 1979, p. 16.
3 H. de. Waardt, Endor and Amsterdam: the Image ofthe Witchcraft as a Weapon in the Political
Arena, in: Religion, the Supernatural and Visual Culture in Early Modern Europę: An album
amicorumfor Charles Zika, J. Spinks, D. Eichberger (eds.), Leiden 2015, pp. 130-131.