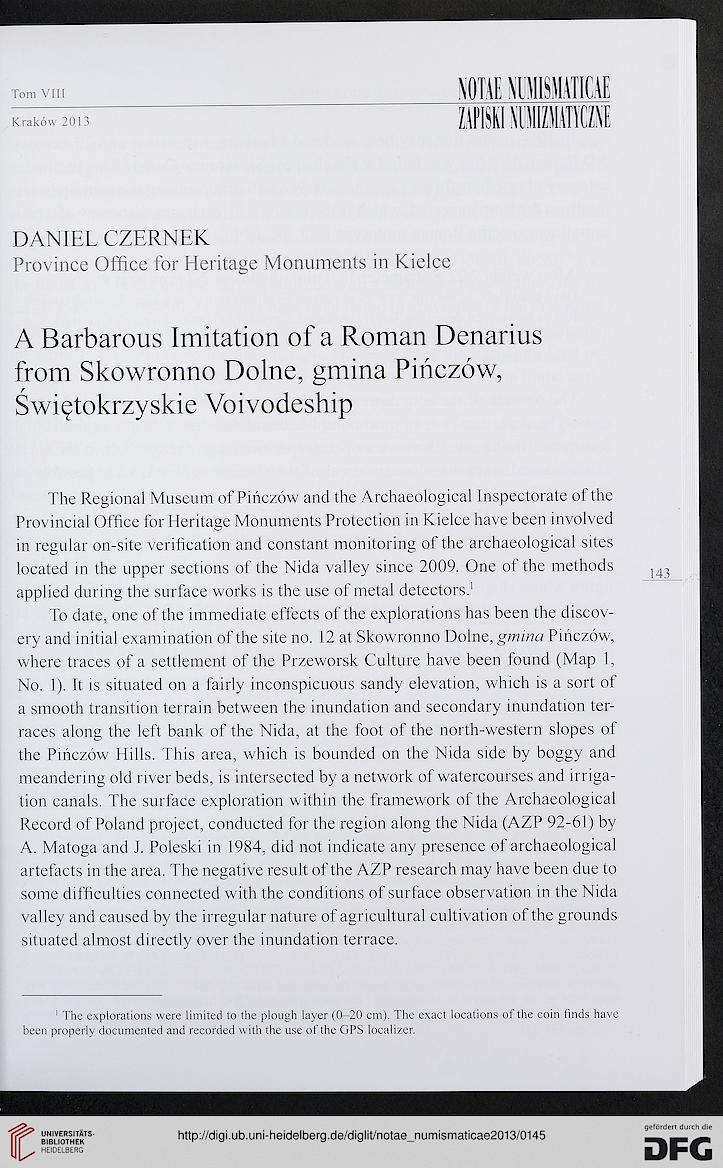 The Regional Museum of Pińczów and the Archaeoiogical Inspectorate ofthe
Provincial Ofhce for Heritage Monuments Protection in Kielce have been involved
in reguiar on-site verińcation and constant monitoring of the archaeoiogical sites
located in the upper sections of the Nida valley sińce 2009. One of the methods
applied during the surface works is the use of metal detectors.'
To datę, one of the immediate effects of the explorations has been the discov-
ery and initial examination of the site no. 12 at Skowronno Dolne, Pińczów,
where traces of a settlement of the Przeworsk Culture have been tbund (Map 1,
No. 1). It is situated on a fairly inconspicuous sandy elevation, which is a sort of
a smooth transition terrain between the inundation and secondary inundation ter-
races along the left bank of the Nida, at the tbot of the north-western slopes of
the Pińczów Hills. This area, which is bounded on the Nida side by boggy and
meandering old river beds, is intersected by a network of watercourses and irriga-
tion canals. The surface exp!oration within the framework of the Archaeoiogical
Record of Poland project, conducted for the region along the Nida (AZP 92-61) by
A. Matoga and J. Poleski in 1984, did not indicate any presence of archaeoiogical
artefacts in the area. The negative result of the AZP research may have been due to
some difhculties connected with the conditions of surface observation in the Nida
valley and caused by the irregular naturę of agricultural cultivation ofthe grounds
situated almost directly over the inundation terrace.

' The explorations were timited to the plough layer (0-20 cm). The exact locations of the coin finds have
been property documented and recorded with the use of the GPS localizer.