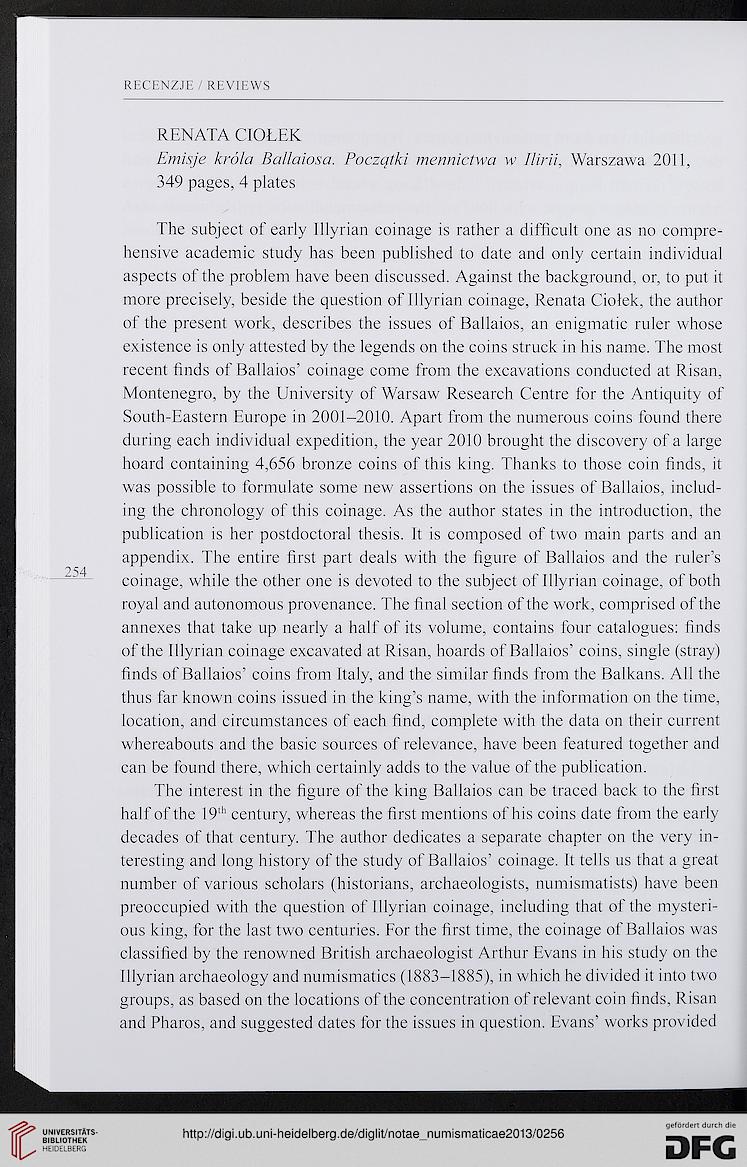 RENATA CIOŁEK
ZA? A/o Z/AC/ Z?c//ć7/c\ć/. W? czy/Z z /7?c/7/7/'cAiY/ w //A/z, Warszawa 2011,
349 pages, 4 plates
The subject of early !Hyrian coinage is rather a difhcult one as no compre-
hensive academic study has been pubtished to datę and only certain individua)
aspects of the problem have been discussed. Against the background, or, to put it
morę precisely, beside the question of Hlyrian coinage, Renata Ciołek, the author
of the present work, describes the issues of Ballaios, an enigmatic ruler whose
existence is only attested by the legends on the coins struck in his name. The most
recent finds of Ballaios' coinage come from the excavations conducted at Risan,
Montenegro, by the University of Warsaw Research Centre tor the Antiquity of
South-Eastern Europę in 2001-2010. Apart from the numerous coins found there
during each individual expedition, the year 2010 brought the discovery of a large
hoard containing 4,656 bronze coins of this king. Thanks to those coin hnds, it
was possible to Ibrmulate some new assertions on the issues of Ballaios, includ-
ing the chronology of this coinage. As the author States in the introduction, the
publication is her postdoctoral thesis. It is composed of two main parts and an
appendix. The entire hrst part deals with the figurę of Ballaios and the ruler's
coinage, while the other one is devoted to the subject of lllyrian coinage, of both
royal and autonomous provenance. The finał section of the work, comprised of the
annexes tliat take up nearly a half of its volume, contains four catalogues: hnds
of the lllyrian coinage excavated at Risan, hoards of Ballaios' coins, single (stray)
hnds of Ballaios' coins from Italy, and the similar hnds from the Balkans. Ali the
thus far known coins issued in the king's name, with the information on the time,
location, and circumstances of each hnd, complete with the data on their current
whereabouts and the basie sources of re!evance, have been featured together and
can be found there, which certainly adds to the value of the publication.
The interest in the hgure of the king Ballaios can be traced back to the hrst
half of the 19*'' century, whereas the hrst mentions of his coins datę from the early
decades of that century. The author dedicates a separate chapter on the very in-
teresting and long history of the study of Ballaios' coinage. It tells us that a great
number of various scholars (historians, archaeologists, numismatists) have been
preoccupied with the question of lllyrian coinage, ineluding that of the mysteri-
ous king, for the last two centuries. For the hrst time, the coinage of Ballaios was
classihed by the renowned British archaeologist Arthur Evans in his study on the
Hlyrian archaeology and numismatics (1883-1885), in which he divided it into two
groups, as based on the locations of the concentration of relevant coin hnds, Risan
and Pharos, and suggested dates lor the issues in question. Evans' works provided