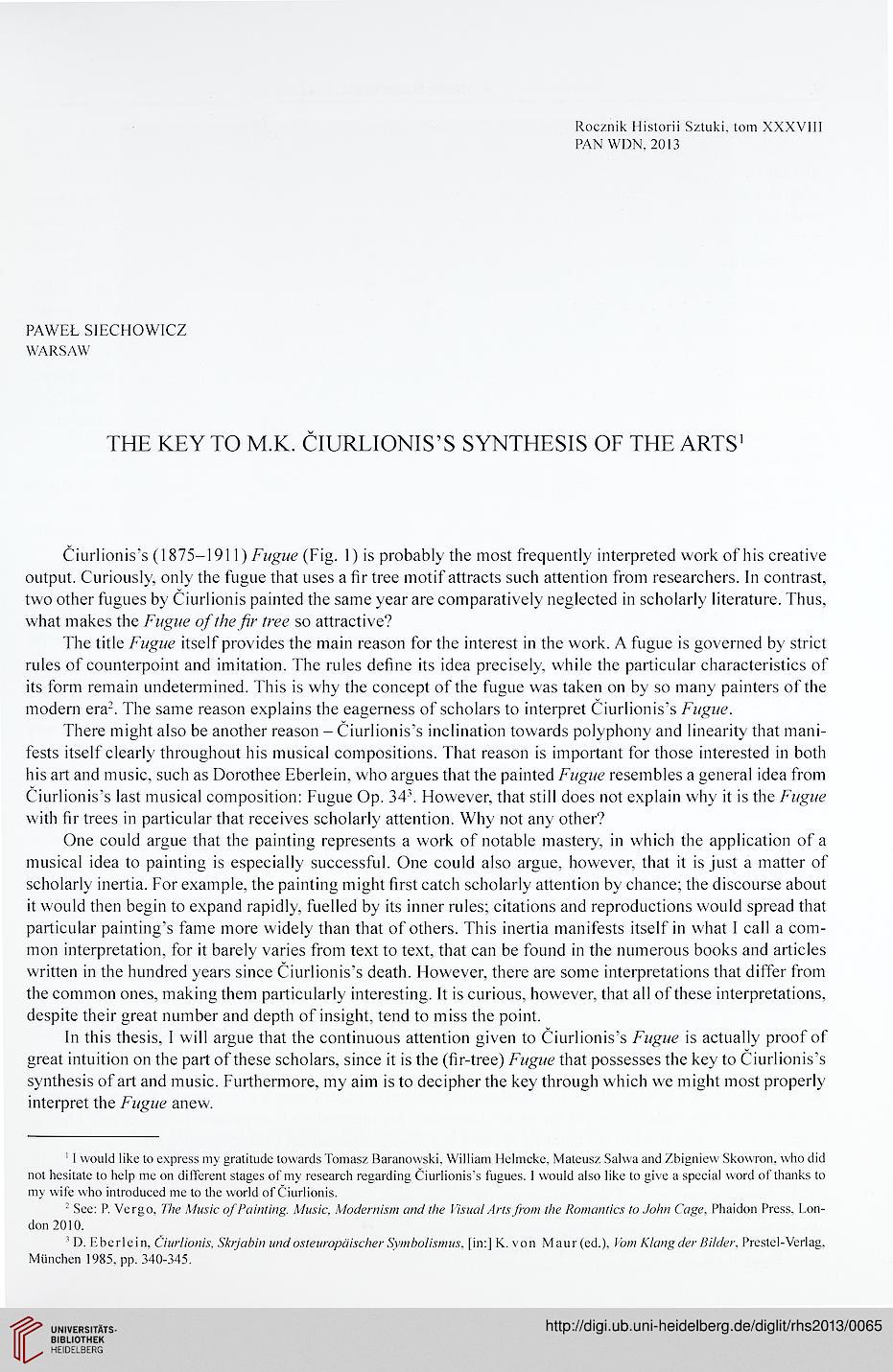 THE KEY TO M.K. CIURLIONIS'S SYNTHESIS OF THE ARTS

Ciurlionis's (1875-1911 ) Fugue (Fig. 1 ) is probably the most frequently interpreted work of his créative
output. Curiously, only the fugue that uses a fir tree motif attracts such attention from researchers. In contrast,
two other fugues by Ciurlionis painted the same year are comparatively neglected in scholarly literaturę. Thus.
what makes the Fugue of the fir tree so attractive?

The title Fugue itself provides the main reason for the interest in the work. A fugue is governed by strict
rules of counterpoint and imitation. The rules defme its idea precisely, while the particular characteristics of
its form remain undetermined. This is why the concept of the fugue was taken on by so many painters of the
modem era2. The same reason explains the eagerness of scholars to interpret Ciurlionis's Fugue.

There might also be another reason - Ciurlionis's inclination towards polyphony and linearity that mani-
fests itself clearly throughout his musical compositions. That reason is important for those interested in both
his art and music, such as Dorothée Eberlein, who argues that the painted Fugue resembles a generał idea from
Ciurlionis's last musical composition: Fugue Op. 34?. However, that still does not explain why it is the Fugue
with fir trees in particular that receives scholarly attention. Why not any other?

One could argue that the painting represents a work of notable mastery, in which the application of a
musical idea to painting is especially successful. One could also argue, however, that it is just a matter of
scholarly inertia. For example, the painting might first catch scholarly attention by chance; the discourse about
it would then begin to expand rapidly, fuelled by its inner rules; citations and reproductions would spread that
particular painting's famé more widely than that of others. This inertia manifests itself in what I call a com-
mon interprétation, for it barely varies from text to text, that can be found in the numerous books and articles
written in the hundred years since Ciurlionis's death. However, there are some interprétations that differ from
the common ones, making them particularly interesting. It is curious, however, that ail of thèse interprétations,
despite their great number and depth of insight, tend to miss the point.

In this thesis, I will argue that the continuous attention given to Ciurlionis's Fugue is actually proof of
great intuition on the part of thèse scholars, since it is the (fir-tree) Fugue that possesses the key to Ciurlionis's
synthesis of art and music. Furthermore, my aim is to decipher the key through which we might most properly
interpret the Fugue anew.

1 I would like to express my gratitude towards Tomasz Baranowski, William Helmcke. Mateusz Salwa and Zbigniew Skowron, who did
not hesitate to help me on différent stages of my research regarding Ciurlionis's fugues. I would also like to give a spécial word of thanks to
my wife who introduced me to the world of Ciurlionis.

2 See: P. Vergo. The Music of Painting. Music, Modernism and the Visual Arts from the Romantics to John Cage, Phaidon Press. Lon-
don 2010.