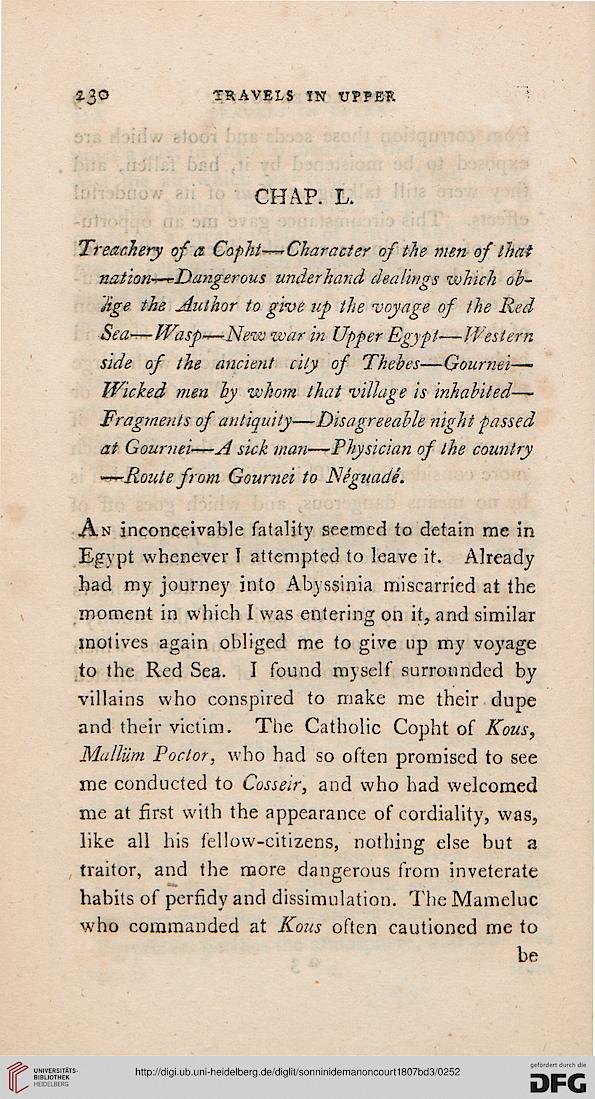 Treachery of a Copht—'Character of the men of that
nations-Dangerous underhand dealings which ob~
'Jige the Author to give up the voyage of the Red
Sea—Wasp—New war in Upper Egypt—Western
side of the ancient city of Thebes—Gournei—
Wicked men by whom that village is inhabited—
Fragments of antiquity—Disagreeable night passed
at Gournei—A sick man—Physician of the country
—-Route from Gournei to JSeguade.

An inconceivable fatality seemed to detain me in
Egypt whenever 1 attempted to leave it. Already
had my journey into Abyssinia miscarried at the
moment in which I was entering on it, and similar
motives again obliged me to give up my voyage
to the Red Sea. I found m)sclf surrounded by
villains who conspired to make me their dupe
and their victim. The Catholic Copht of Kous,
MalJiim Poctor, who had so often promised to see
me conducted to Cosseir, and who had welcomed
me at first with the appearance of cordiality, was,
like all his fellow-citizens, nothing else but a
traitor, and the more dangerous from inveterate
habits of perfidy and dissimulation. The Mamcluc
who commanded at Kous often cautioned me to