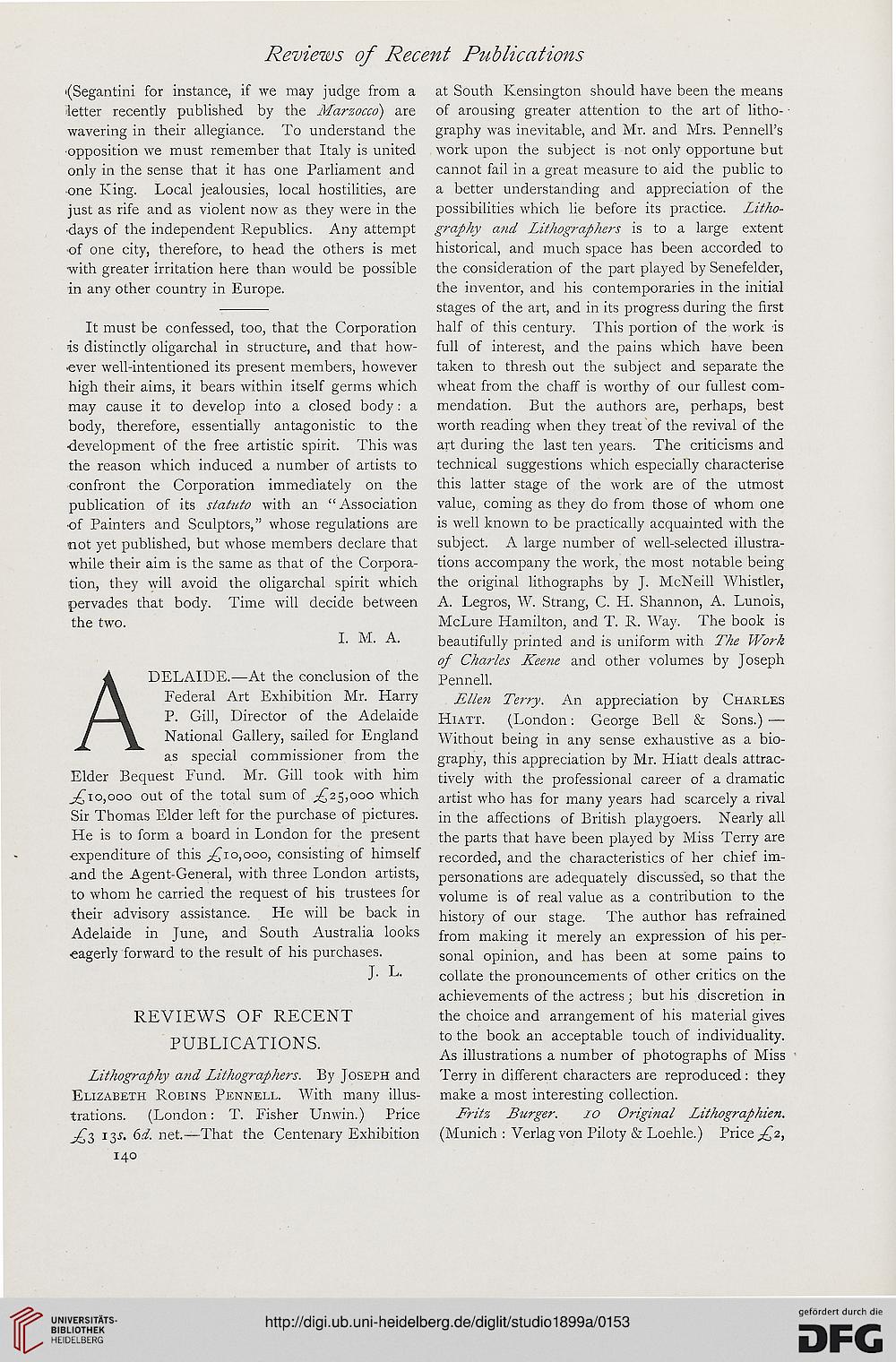 '(Segantini for instance, if we may judge from a
letter recently published by the Marzoccd) are
wavering in their allegiance. To understand the
opposition we must remember that Italy is united
only in the sense that it has one Parliament and
•one King. Local jealousies, local hostilities, are
just as rife and as violent now as they were in the
•days of the independent Republics. Any attempt
of one city, therefore, to head the others is met
with greater irritation here than would be possible
in any other country in Europe.

It must be confessed, too, that the Corporation
is distinctly oligarchial in structure, and that how-
ever well-intentioned its present members, however
high their aims, it bears within itself germs which
may cause it to develop into a closed body: a
body, therefore, essentially antagonistic to the
•development of the free artistic spirit. This was
the reason which induced a number of artists to
confront the Corporation immediately on the
publication of its statute with an " Association
■of Painters and Sculptors," whose regulations are
not yet published, but whose members declare that
while their aim is the same as that of the Corpora-
tion, they will avoid the oligarchal spirit which
pervades that body. Time will decide between
the two.

ADELAIDE.—At the conclusion of the
Federal Art Exhibition Mr. Harry
P. Gill, Director of the Adelaide
National Gallery, sailed for England
as special commissioner from the
Elder Bequest Fund. Mr. Gill took with him
_^io,ooo out of the total sum of ^25,000 which
Sir Thomas Elder left for the purchase of pictures.
He is to form a board in London for the present
expenditure of this ^10,000, consisting of himself
and the Agent-General, with three London artists,
to whom he carried the request of his trustees for
their advisory assistance. He will be back in
Adelaide in June, and South Australia looks
eagerly forward to the result of his purchases.

at South Kensington should have been the means
of arousing greater attention to the art of litho- ■
graphy was inevitable, and Mr. and Mrs. Pennell's
work upon the subject is not only opportune but
cannot fail in a great measure to aid the public to
a better understanding and appreciation of the
possibilities which lie before its practice. Litho-
graphy and Lithographers is to a large extent
historical, and much space has been accorded to
the consideration of the part played by Senefelder,
the inventor, and his contemporaries in the initial
stages of the art, and in its progress during the first
half of this century. This portion of the work is
full of interest, and the pains which have been
taken to thresh out the subject and separate the
wheat from the chaff is worthy of our fullest com-
mendation. But the authors are, perhaps, best
worth reading when they treat of the revival of the
art during the last ten years. The criticisms and
technical suggestions which especially characterise
this latter stage of the work are of the utmost
value, coming as they do from those of whom one
is well known to be practically acquainted with the
subject. A large number of well-selected illustra-
tions accompany the work, the most notable being
the original lithographs by J. McNeill Whistler,
A. Legros, W. Strang, C. H. Shannon, A. Lunois,
McLure Hamilton, and T. R. Way. The book is
beautifully printed and is uniform with The Work
of Charles Keene and other volumes by Joseph
Pennell.

Elleti Terry. An appreciation by Charles
Hiatt. (London: George Bell & Sons.) —
Without being in any sense exhaustive as a bio-
graphy, this appreciation by Mr. Hiatt deals attrac-
tively with the professional career of a dramatic
artist who has for many years had scarcely a rival
in the affections of British playgoers. Nearly all
the parts that have been played by Miss Terry are
recorded, and the characteristics of her chief im-
personations are adequately discussed, so that the
volume is of real value as a contribution to the
history of our stage. The author has refrained
from making it merely an expression of his per-
sonal opinion, and has been at some pains to
collate the pronouncements of other critics on the
achievements of the actress; but his discretion in
the choice and arrangement of his material gives
to the book an acceptable touch of individuality.
As illustrations a number of photographs of Miss
Terry in different characters are reproduced : they
make a most interesting collection.