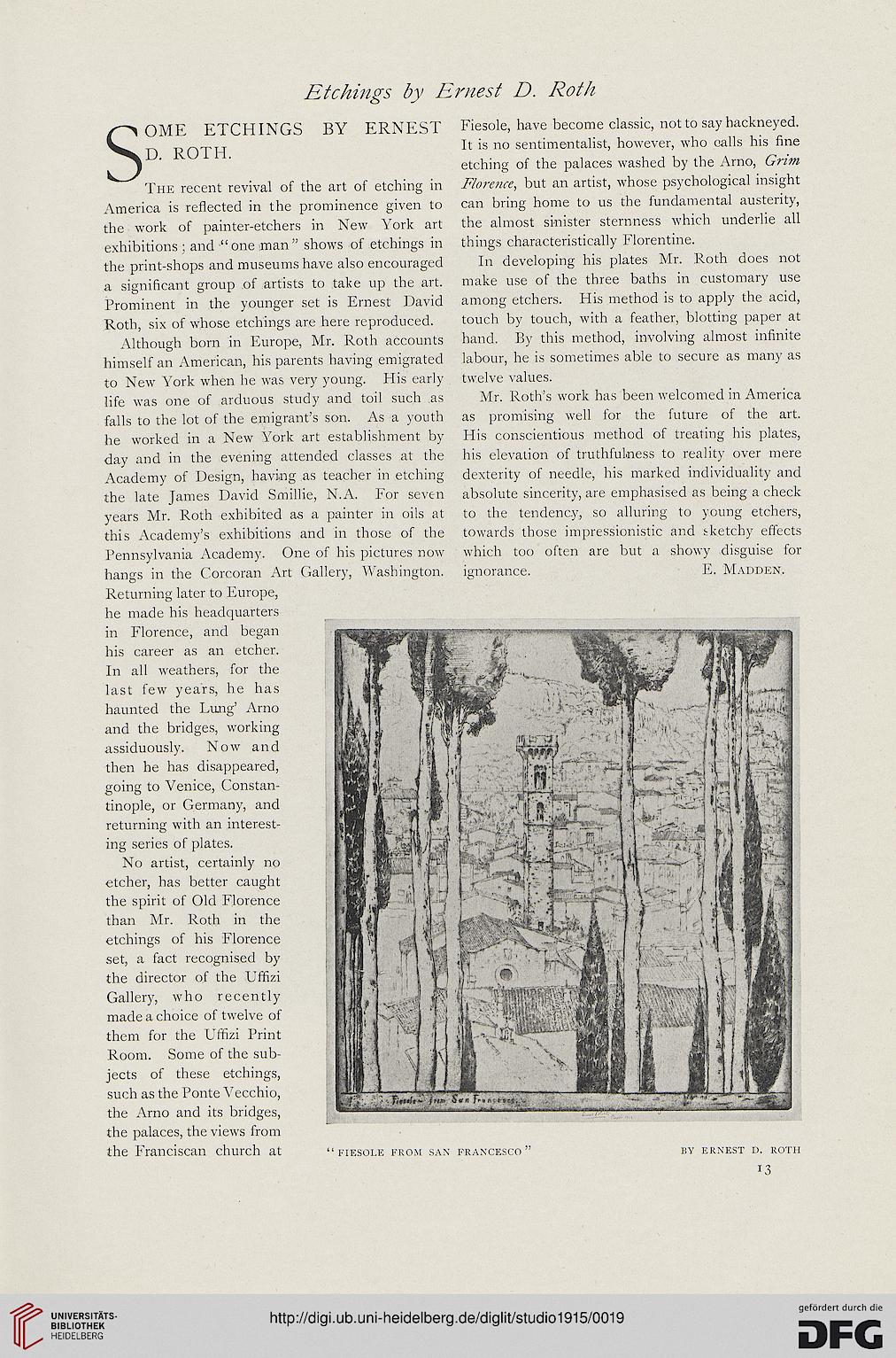 SOME ETCHINGS BY ERNEST Fiesole, have become classic, not to say hackneyed.
D ROTH ^'s 110 sentimentalist, however, who calls his fine

etching of the palaces washed by the Arno, Grim
The recent revival of the art of etching in Florence, but an artist, whose psychological insight
America is reflected in the prominence given to can bring home to us the fundamental austerity,
the work of painter-etchers in New York art the almost sinister sternness which underlie all
exhibitions ; and "one man" shows of etchings in things characteristically Florentine,
the print-shops and museums have also encouraged In developing his plates Mr. Roth does not
a significant group of artists to take up the art. make use of the three baths in customary use
Prominent in the younger set is Ernest David among etchers. His method is to apply the acid,
Roth, six of whose etchings are here reproduced. touch by touch, with a feather, blotting paper at
Although born in Europe, Mr. Roth accounts hand. By this method, involving almost infinite
himself an American, his parents having emigrated labour, he is sometimes able to secure as many as
to New York when he was very young. His early twelve values.

life was one of arduous study and toil such as Mr. Roth's work has been welcomed in America
falls to the lot of the emigrant's son. As a youth as promising well for the future of the art.
he worked in a New York art establishment by His conscientious method of treating his plates,
day and in the evening attended classes at the his elevation of truthfulness to reality over mere
Academy of Design, having as teacher in etching dexterity of needle, his marked individuality and
the late James David Smillie, N.A. For seven absolute sincerity, are emphasised as being a check
years Mr. Roth exhibited as a painter in oils at to the tendency, so alluring to young etchers,
this Academy's exhibitions and in those of the towards those impressionistic and tketchy effects
Pennsylvania Academy. One of his pictures now which too often are but a showy disguise for
hangs in the Corcoran Art Gallery, Washington, ignorance. E. Madden.

Returning later to Europe,
he made his headquarters
in Florence, and began
his career as an etcher.
In all weathers, for the
last few years, he has
haunted the Lung' Arno
and the bridges, working
assiduously. Now and
then he has disappeared,
going to Venice, Constan-
tinople, or Germany, and
returning with an interest-
ing series of plates.

No artist, certainly no
etcher, has better caught
the spirit of Old Florence
than Mr. Roth in the
etchings of his Florence
set, a fact recognised by
the director of the Uffizi
Gallery, who recently
made a choice of twelve of
them for the Uffizi Print
Room. Some of the sub-
jects of these etchings,
such as the Ponte Vecchio,
the Arno and its bridges,
the palaces, the views from