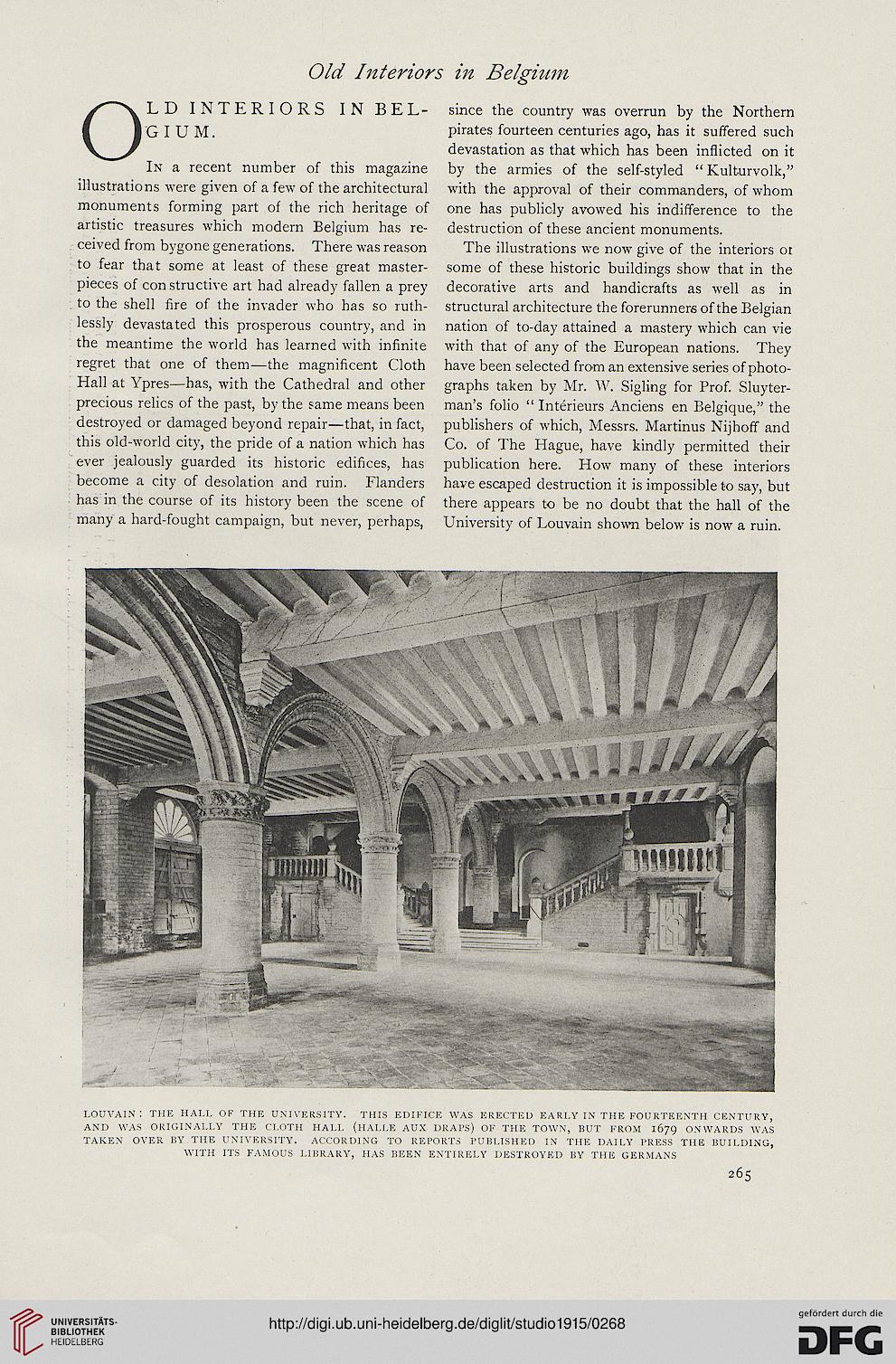 OLD INTERIORS IN BEL- since the country was overrun by the Northern
G I U M pirates fourteen centuries ago, has it suffered such
devastation as that which has been inflicted on it
In a recent number of this magazine by the armies of the self-styled " Kulturvolk,"
illustrations were given of a few of the architectural with the approval of their commanders, of whom
monuments forming part of the rich heritage of one has publicly avowed his indifference to the
artistic treasures which modern Belgium has re- destruction of these ancient monuments,
ceived from bygone generations. There was reason The illustrations we now give of the interiors ot
to fear that some at least of these great master- some of these historic buildings show that in the
pieces of constructive art had already fallen a prey decorative arts and handicrafts as well as in
to the shell fire of the invader who has so ruth- structural architecture the forerunners of the Belgian
lessly devastated this prosperous country, and in nation of to-day attained a mastery which can vie
the meantime the world has learned with infinite with that of any of the European nations. They
regret that one of them—the magnificent Cloth have been selected from an extensive series of photo-
Hall at Ypres—has, with the Cathedral and other graphs taken by Mr. W. Sigling for Prof. Sluyter-
precious relics of the past, by the same means been man's folio " Interieurs Anciens en Belgique," the
destroyed or damaged beyond repair—that, in fact, publishers of which, Messrs. Martinus Nijhoff and
this old-world city, the pride of a nation which has Co. of The Hague, have kindly permitted their
ever jealously guarded its historic edifices, has publication here. How many of these interiors
become a city of desolation and ruin. Flanders have escaped destruction it is impossible to say, but
has in the course of its history been the scene of there appears to be no doubt that the hall of the
many a hard-fought campaign, but never, perhaps, University of Louvain shown below is now a ruin.

LOUVAIN : THE HALL OF THE UNIVERSITY. THIS EDIFICE WAS ERECTED EARLY IN THE FOURTEENTH CENTURY,
AND WAS ORIGINALLY THE CLOTH HALL (HALLE AUX DRAI'S) OF THE TOWN, BUT FROM 1679 ONWARDS WAS
TAKEN OVER BY THE UNIVERSITY. ACCORDING TO REPORTS PUBLISHED IN THE DAILY PRESS THE BUILDING,
WITH ITS FAMOUS LIBRARY, HAS BEEN ENTIRELY DESTROYED BY THE GERMANS