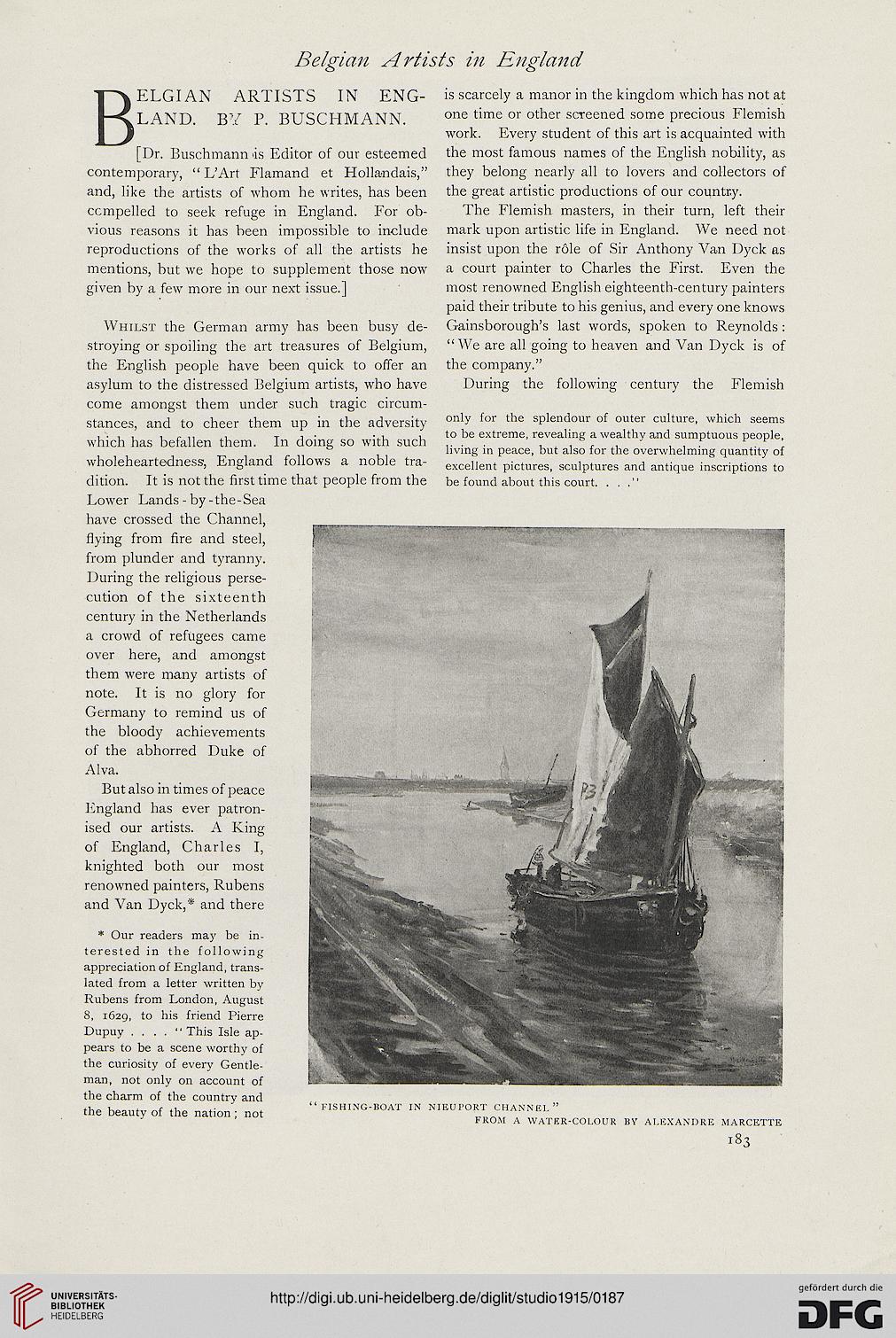 LAND BY P BUSCHMANN one time or other screened some precious Flemish
work. Every student of this art is acquainted with

[Dr. Buschmann is Editor of our esteemed the most famous names of the English nobility, as

contemporary, " L'Art Flamand et Holla-ndais," they belong nearly all to lovers and collectors of

and, like the artists of whom he writes, has been the great artistic productions of our country,

compelled to seek refuge in England. For ob- The Flemish masters, in their turn, left their

vious reasons it has been impossible to include mark upon artistic life in England. We need not

mentions, but we hope to supplement those now a court painter to Charles the First. Even the

given by a few more in our next issue.] most renowned English eighteenth-century painters

paid their tribute to his genius, and every one knows

Whilst the German army has been busy de- Gainsborough's last words, spoken to Reynolds:

stroying or spoiling the art treasures of Belgium, "We are all going to heaven and Van Dyck is of

the English people have been quick to offer an the company."

asylum to the distressed Belgium artists, who have During the following century the Flemish
come amongst them under such tragic circum-
stances, and to cheer them up in the adversity only for the splendour of outer culture, which seems
, . , , , . , T , . . . , to be extreme, revealing a wealthy and sumptuous people,
which has befallen them. In doing so with such . . , ° . i • r

° living in peace, but also tor the overwhelming quantity of

wholeheartedness, England follows a noble tra- exceiient pictures, sculptures and antique inscriptions to
dition. It is not the first time that people from the be found about this court. . . ."
Lower Lands - by-the-Sea
have crossed the Channel,
flying from fire and steel,
from plunder and tyranny.
During the religious perse-
cution of the sixteenth
century in the Netherlands
a crowd of refugees came
over here, and amongst
them were many artists of
note. It is no glory for
Germany to remind us of
the bloody achievements
of the abhorred Duke of
Alva.

But also in times of peace
England has ever patron-
ised our artists. A King
of England, Charles I,
knighted both our most
renowned painters, Rubens
and Van Dyck,* and there

* Our readers may be in-
terested in the following
appreciation of England, trans-
lated from a letter written by
Rubens from London, August
8, 1629, to his friend Pierre
Dupuy .... "This Isle ap-
pears to be a scene worthy of
the curiosity of every Gentle-
man, not only on account of
the charm of the country and
the beauty of the nation; not

FROM A WATER-COLOUR BY ALEXANDRE MARCETTE