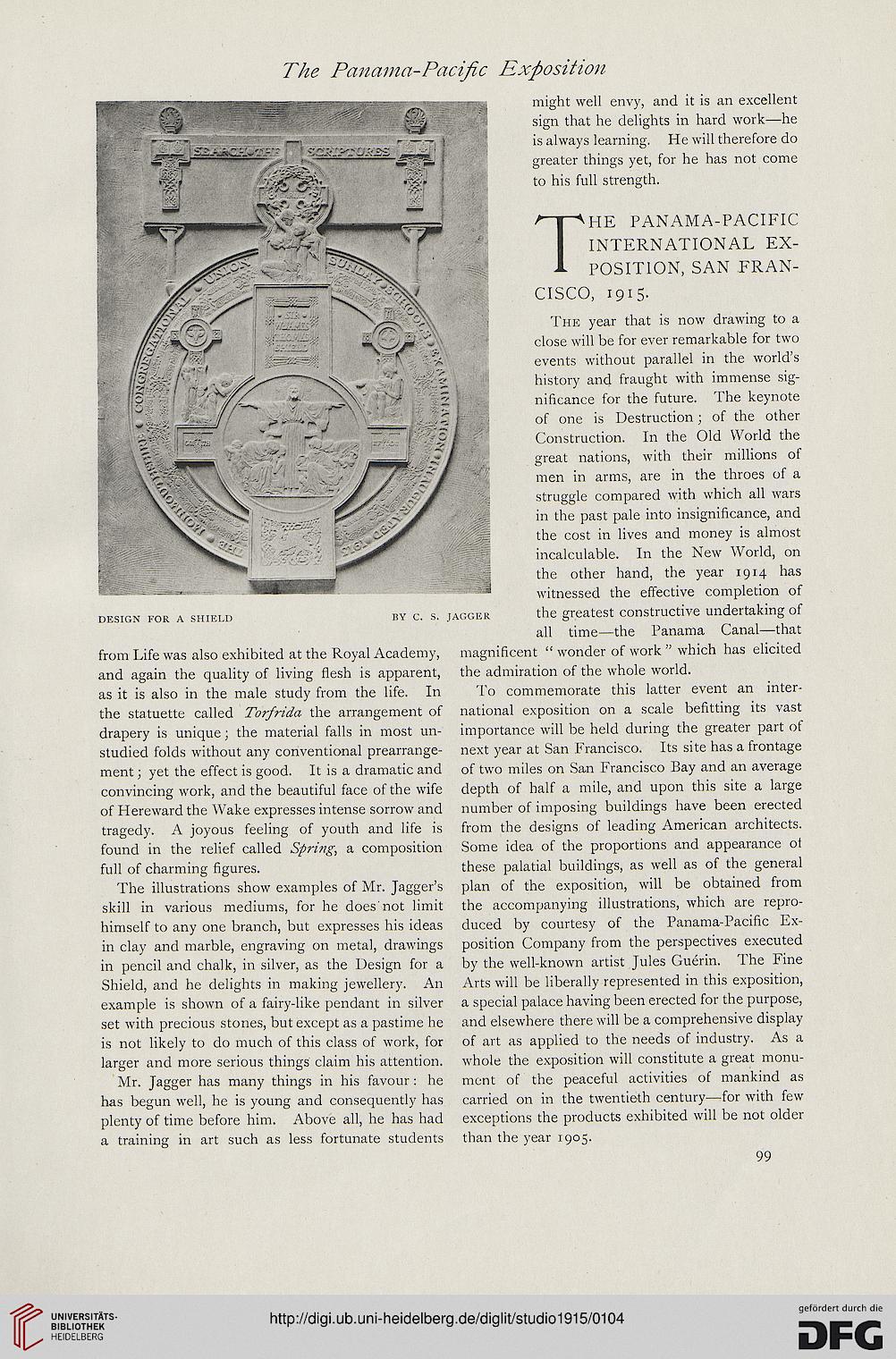 might well envy, and it is an excellent
sign that he delights in hard work—he
is always learning. He will therefore do
greater things yet, for he has not come
to his full strength.

The year that is now drawing to a
close will be for ever remarkable for two
events without parallel in the world's
history and fraught with immense sig-
nificance for the future. The keynote
of one is Destruction; of the other
Construction. In the Old World the
great nations, with their millions of
men in arms, are in the throes of a
struggle compared with which all wars
in the past pale into insignificance, and
the cost in lives and money is almost
incalculable. In the New World, on
the other hand, the year 1914 has
witnessed the effective completion of
design for a shield hy c. s. jagger the greatest constructive undertaking of

all time—the Panama Canal—that
from Life was also exhibited at the Royal Academy, magnificent " wonder of work " which has elicited
and again the quality of living flesh is apparent, the admiration of the whole world,
as it is also in the male study from the life. In To commemorate this latter event an inter-
the statuette called Torfrida the arrangement of national exposition on a scale befitting its vast
drapery is unique; the material falls in most un- importance will be held during the greater part of
studied folds without any conventional prearrange- next year at San Francisco. Its site has a frontage
ment; yet the effect is good. It is a dramatic and of two miles on San Francisco Bay and an average
convincing work, and the beautiful face of the wife depth of half a mile, and upon this site a large
of Hereward the Wake expresses intense sorrow and number of imposing buildings have been erected
tragedy. A joyous feeling of youth and life is from the designs of leading American architects,
found in the relief called Spring, a composition Some idea of the proportions and appearance ot
full of charming figures. these palatial buildings, as well as of the general

The illustrations show examples of Mr. Jagger's plan of the exposition, will be obtained from
skill in various mediums, for he does'not limit the accompanying illustrations, which are repro-
himself to any one branch, but expresses his ideas duced by courtesy of the Panama-Pacific Ex-
in clay and marble, engraving on metal, drawings position Company from the perspectives executed
in pencil and chalk, in silver, as the Design for a by the well-known artist Jules Guerin. The Fine
Shield, and he delights in making jewellery. An Arts will be liberally represented in this exposition,
example is shown of a fairy-like pendant in silver a special palace having been erected for the purpose,
set with precious stones, but except as a pastime he and elsewhere there will be a comprehensive display
is not likely to do much of this class of work, for of art as applied to the needs of industry. As a
larger and more serious things claim his attention, whole the exposition will constitute a great monu-
Mr. Jagger has many things in his favour : he ment of the peaceful activities of mankind as
has begun well, he is young and consequently has carried on in the twentieth century—for with few
plenty of time before him. Above all, he has had exceptions the products exhibited will be not older
a training in art such as less fortunate students than the year 1905.