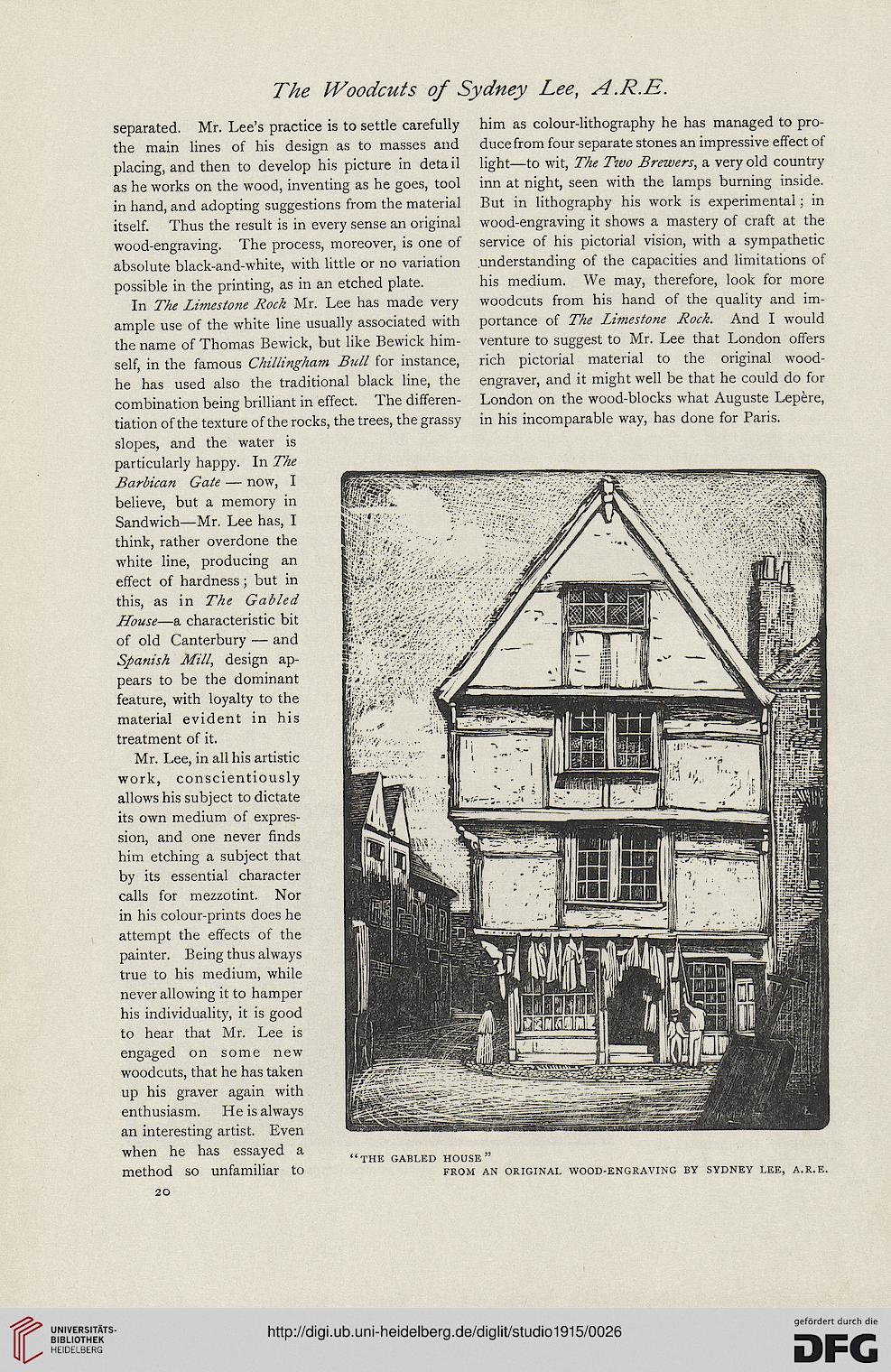 separated. Mr. Lee's practice is to settle carefully him as colour-lithography he has managed to pro-
the main lines of his design as to masses and ducefrom four separate stones an impressive effect of
placing, and then to develop his picture in deta il light—to wit, The Two Brewers, a very old country
as he works on the wood, inventing as he goes, tool inn at night, seen with the lamps burning inside,
in hand, and adopting suggestions from the material But in lithography his work is experimental; in
itself. Thus the result is in every sense an original wood-engraving it shows a mastery of craft at the
wood-engraving. The process, moreover, is one of service of his pictorial vision, with a sympathetic
absolute black-and-white, with little or no variation understanding of the capacities and limitations of
possible in the printing, as in an etched plate. his medium. We may, therefore, look for more

In The Limestone Rock Mr. Lee has made very woodcuts from his hand of the quality and im-
ample use of the white line usually associated with portance of The Limestone Rock. And I would
the name of Thomas Bewick, but like Bewick him- venture to suggest to Mr. Lee that London offers
self, in the famous Chillingham Bull for instance, rich pictorial material to the original wood-
he has used also the traditional black line, the engraver, and it might well be that he could do for
combination being brilliant in effect. The differen- London on the wood-blocks what Auguste Lepere,
tiation of the texture of the rocks, the trees, the grassy in his incomparable way, has done for Paris,
slopes, and the water is
particularly happy. In The
Barbican Gate — now, I
believe, but a memory in
Sandwich—Mr. Lee has, I
think, rather overdone the
white line, producing an
effect of hardness; but in
this, as in The Gabled
House—a characteristic bit
of old Canterbury — and
Spanish Mill, design ap-
pears to be the dominant
feature, with loyalty to the
material evident in his
treatment of it.

Mr. Lee, in all his artistic
work, conscientiously
allows his subject to dictate
its own medium of expres-
sion, and one never finds
him etching a subject that
by its essential character
calls for mezzotint. Nor
in his colour-prints does he
attempt the effects of the
painter. Being thus always
true to his medium, while
never allowing it to hamper
his individuality, it is good
to hear that Mr. Lee is
engaged on some new
woodcuts, that he has taken
up his graver again with Mj&gSg&gsks^--^r~52r~'.?'.. . ~^\!^~~5>g^^M
enthusiasm. He is always

when he has essayed a „

method so unfamiliar to from an original wood-engraving by Sydney lee, a.r.e.