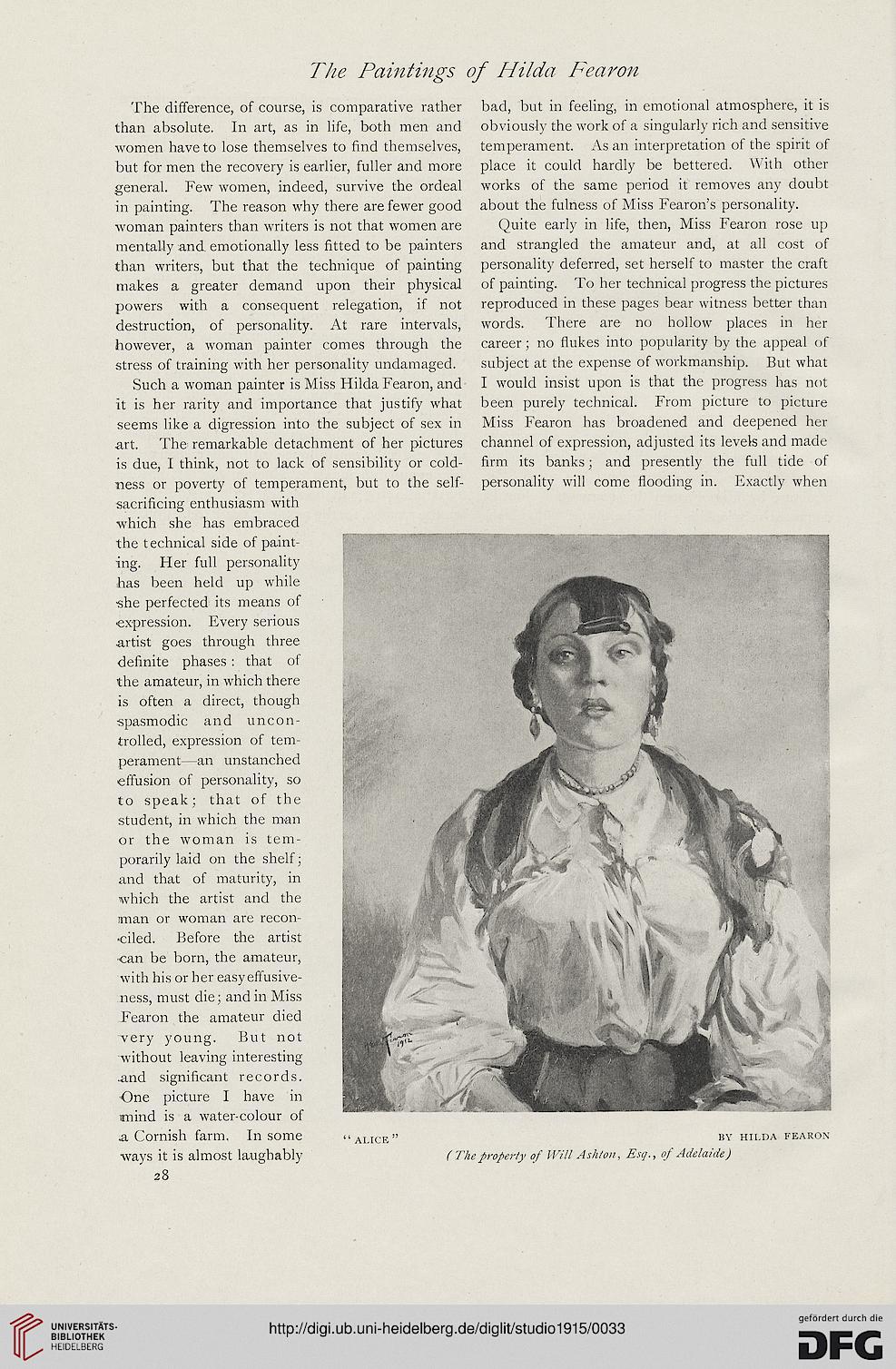 Information about OCR text
The Paintings of Hilda Fear on

The difference, of course, is comparative rather bad, but in feeling, in emotional atmosphere, it is
than absolute. In art, as in life, both men and obviously the work of a singularly rich and sensitive
women have to lose themselves to find themselves, temperament. As an interpretation of the spirit of
but for men the recovery is earlier, fuller and more place it could hardly be bettered. With other
general. Few women, indeed, survive the ordeal works of the same period it removes any doubt
in painting. The reason why there are fewer good about the fulness of Miss Fearon's personality,
woman painters than writers is not that women are Quite early in life, then, Miss Fearon rose up
mentally and emotionally less fitted to be painters and strangled the amateur and, at all cost of
than writers, but that the technique of painting personality deferred, set herself to master the craft
makes a greater demand upon their physical of painting. To her technical progress the pictures
powers with a consequent relegation, if not reproduced in these pages bear witness better than
destruction, of personality. At rare intervals, words. There are no hollow places in her
however, a woman painter comes through the career; no flukes into popularity by the appeal of
stress of training with her personality undamaged. subject at the expense of workmanship. But what

Such a woman painter is Miss Hilda Fearon, and I would insist upon is that the progress has not
it is her rarity and importance that justify what been purely technical. From picture to picture
seems like a digression into the subject of sex in Miss Fearon has broadened and deepened her
art. The: remarkable detachment of her pictures channel of expression, adjusted its levels and made
is due, I think, not to lack of sensibility or cold- firm its banks; and presently the full tide of
ness or poverty of temperament, but to the self- personality will come flooding in. Exactly when
sacrificing enthusiasm with
which she has embraced
the technical side of paint-
ing. Her full personality
has been held up while
■she perfected its means of
expression. Every serious
artist goes through three
definite phases : that of
the amateur, in which there
is often a direct, though
spasmodic and uncon-
trolled, expression of tem-
perament—an unstanched
effusion of personality, so
to speak; that of the
student, in which the man
or the woman is tem-
porarily laid on the shelf;
and that of maturity, in
which the artist and the
man or woman are recon-
ciled. Before the artist
■can be born, the amateur,
with his or her easy effusive-
ness, must die; and in Miss
Fearon the amateur died
very young. But not
without leaving interesting
and significant records.
One picture I have in
tnind is a water-colour of
.lI Cornish farm. I n some "alice" by hilda fearon

•ways it is almost laughably (Theproperty of Will Ash/on, Esq., of Adelaide)