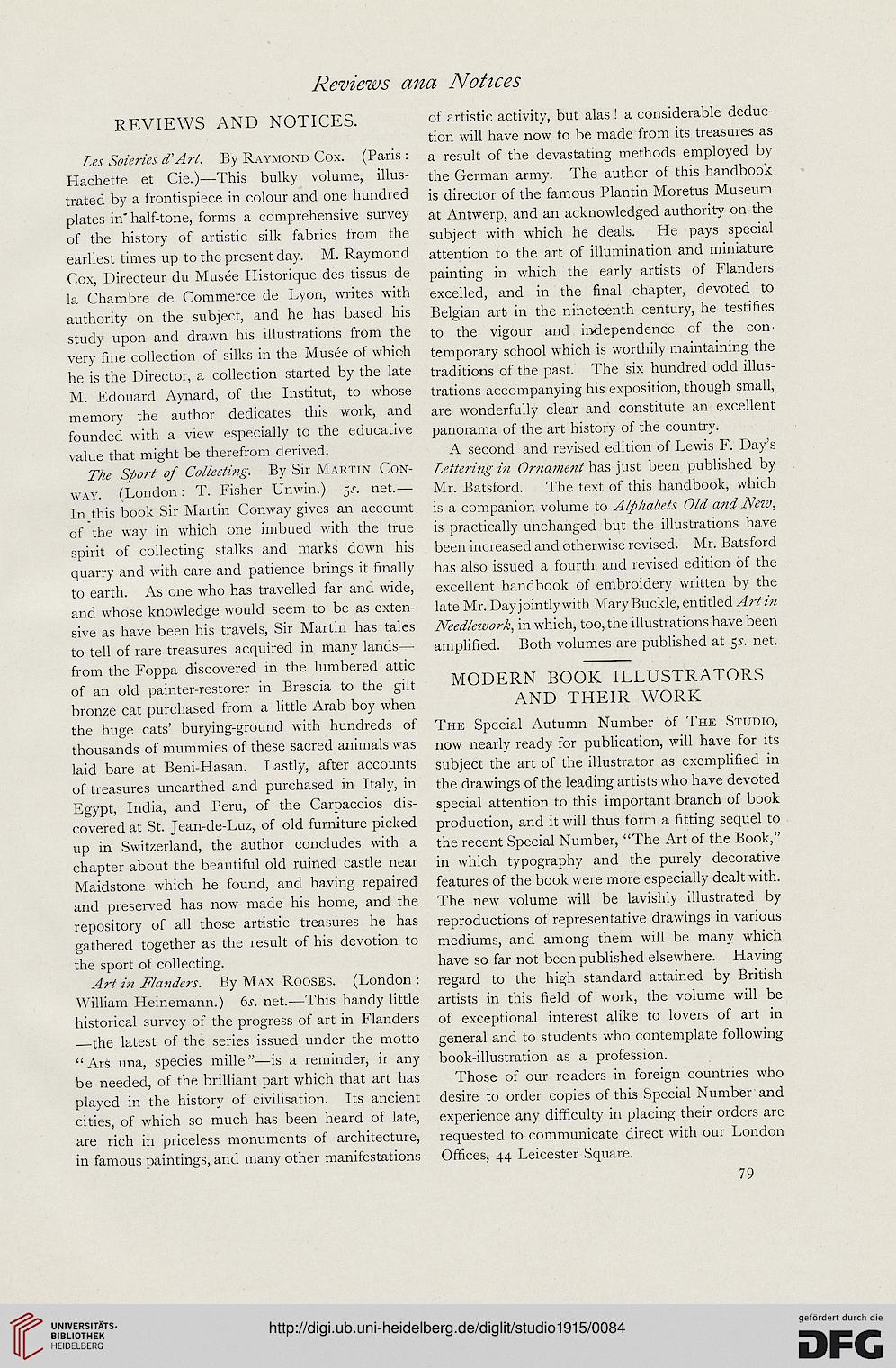 Les Soieries d'Art. By Raymond Cox. (Paris :
Hachette et Cie.)—This bulky volume, illus-
trated by a frontispiece in colour and one hundred
plates in" half-tone, forms a comprehensive survey
of the history of artistic silk fabrics from the
earliest times up to the present day. M. Raymond
Cox, Uirecteur du Musee Historique des tissus de
la Chambre de Commerce de Lyon, writes with
authority on the subject, and he has based his
study upon and drawn his illustrations from the
very fine collection of silks in the Musee of which
he is the Director, a collection started by the late
M. Edouard Aynard, of the Institut, to whose
memory the author dedicates this work, and
founded with a view especially to the educative
value that might be therefrom derived.

The Sport of Collecting. By Sir Martin Con-
way. (London : T. Fisher Unwin.) $s. net.—
In this book Sir Martin Conway gives an account
of the way in which one imbued with the true
spirit of collecting stalks and marks down his
quarry and with care and patience brings it finally
to earth. As one who has travelled far and wide,
and whose knowledge would seem to be as exten-
sive as have been his travels, Sir Martin has tales
to tell of rare treasures acquired in many lands—
from the Foppa discovered in the lumbered attic
of an old painter-restorer in Brescia to the gilt
bronze cat purchased from a little Arab boy when
the huge cats' burying-ground with hundreds of
thousands of mummies of these sacred animals was
laid bare at Beni-Hasan. Lastly, after accounts
of treasures unearthed and purchased in Italy, in
Egypt, India, and Peru, of the Carpaccios dis-
covered at St. Jean-de-Luz, of old furniture picked
up in Switzerland, the author concludes with a
chapter about the beautiful old ruined castle near
Maidstone which he found, and having repaired
and preserved has now made his home, and the
repository of all those artistic treasures he has
gathered together as the result of his devotion to
the sport of collecting.

Art in Flanders. By Max Rooses. (London :
William Heinemann.) 6s. net.—This handy little
historical survey of the progress of art in Flanders
—the latest of the series issued under the motto
" Ars una, species mille"—is a reminder, ii any
be needed, of the brilliant part which that art has
played in the history of civilisation. Its ancient
cities, of which so much has been heard of late,
are rich in priceless monuments of architecture,
in famous paintings, and many other manifestations

of artistic activity, but alas ! a considerable deduc-
tion will have now to be made from its treasures as
a result of the devastating methods employed by
the German army. The author of this handbook
is director of the famous Plantin-Moretus Museum
at Antwerp, and an acknowledged authority on the
subject with which he deals. He pays special
attention to the art of illumination and miniature
painting in which the early artists of Flanders
excelled, and in the final chapter, devoted to
Belgian art in the nineteenth century, he testifies
to the vigour and independence of the con-
temporary school which is worthily maintaining the
traditions of the past. The six hundred odd illus-
trations accompanying his exposition, though small,
are wonderfully clear and constitute an excellent
panorama of the art history of the country.

A second and revised edition of Lewis F. Day's
Lettering in Ornament has just been published by
Mr. Batsford. The text of this handbook, which
is a companion volume to Alphabets Old and New,
is practically unchanged but the illustrations have
been increased and otherwise revised. Mr. Batsford
has also issued a fourth and revised edition of the
excellent handbook of embroidery written by the
late Mr. Day jointly with Mary Buckle, entitled Art in
Needlework, in which, too, the illustrations have been
amplified. Both volumes are published at $s. net.

MODERN BOOK ILLUSTRATORS
AND THEIR WORK

The Special Autumn Number of The Studio,
now nearly ready for publication, will have for its
subject the art of the illustrator as exemplified in
the drawings of the leading artists who have devoted
special attention to this important branch of book
production, and it will thus form a fitting sequel to
the recent Special Number, "The Art of the Book,"
in which typography and the purely decorative
features of the book were more especially dealt with.
The new volume will be lavishly illustrated by
reproductions of representative drawings in various
mediums, and among them will be many which
have so far not been published elsewhere. Having
regard to the high standard attained by British
artists in this field of work, the volume will be
of exceptional interest alike to lovers of art in
general and to students who contemplate following
book-illustration as a profession.

Those of our readers in foreign countries who
desire to order copies of this Special Number and
experience any difficulty in placing their orders are
requested to communicate direct with our London
Offices, 44 Leicester Square.