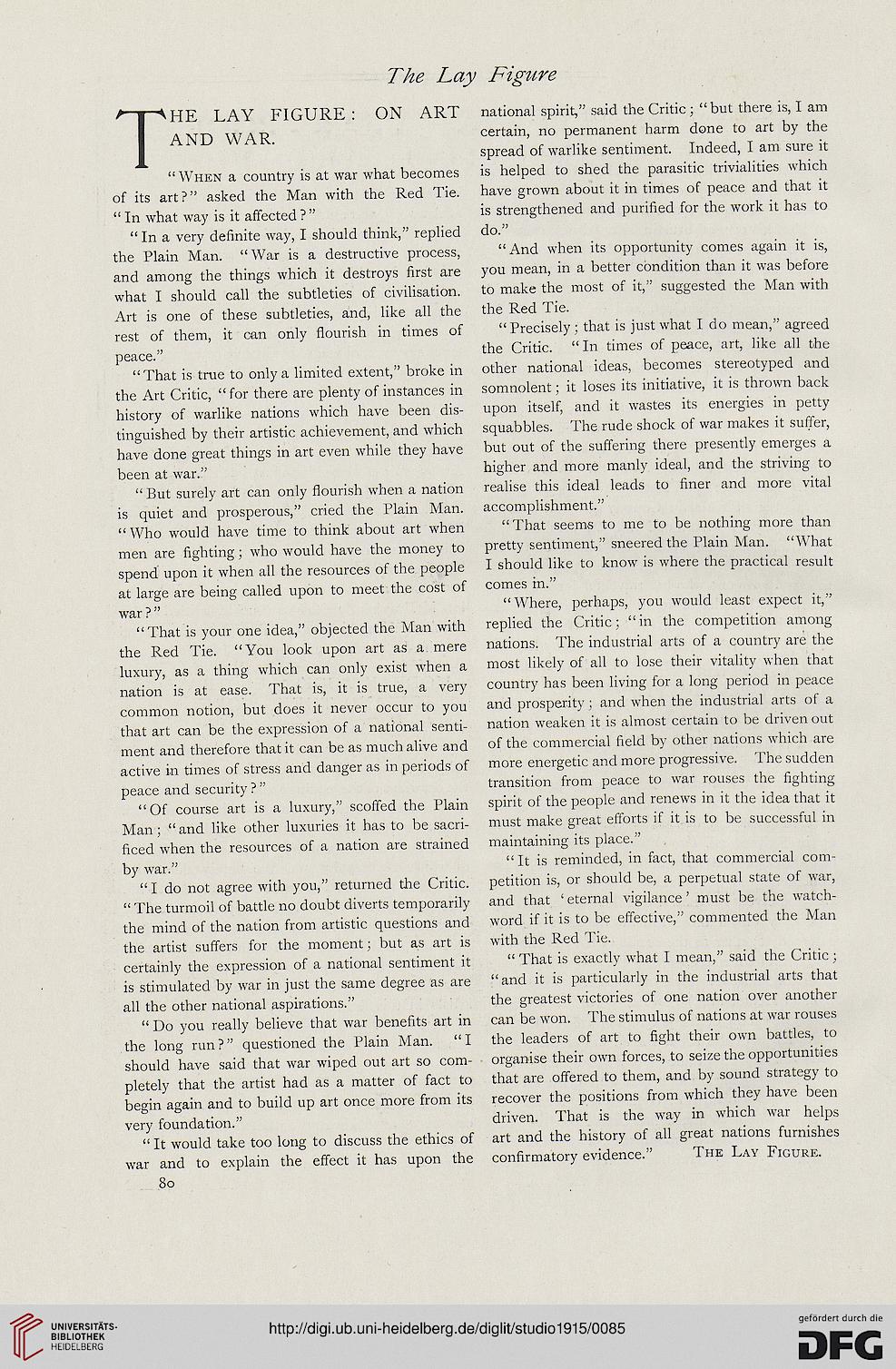 THE LAY FIGURE: ON ART
AND WAR.

"When a country is at war what becomes
of its art?" asked the Man with the Red Tie.
" In what way is it affected ? "

" In a very definite way, I should think," replied
the Plain Man. "War is a destructive process,
and among the things which it destroys first are
what I should call the subtleties of civilisation.
Art is one of these subtleties, and, like all the
rest of them, it can only flourish in times of
peace."

"That is true to only a limited extent," broke in
the Art Critic, " for there are plenty of instances in
history of warlike nations which have been dis-
tinguished by their artistic achievement, and which
have done great things in art even while they have
been at war."

" But surely art can only flourish when a nation
is quiet and prosperous," cried the Plain Man.
" Who would have time to think about art when
men are fighting; who would have the money to
spend upon it when all the resources of the people
at large are being called upon to meet the cost of
war ? "

"That is your one idea," objected the Man with
the Red Tie. "You look upon art as a mere
luxury, as a thing which can only exist when a
nation is at ease. That is, it is true, a very
common notion, but does it never occur to you
that art can be the expression of a national senti-
ment and therefore that it can be as much alive and
active in times of stress and danger as in periods of
peace and security ? "

"Of course art is a luxury," scoffed the Plain
Man; "and like other luxuries it has to be sacri-
ficed when the resources of a nation are strained
by war."

" I do not agree with you," returned the Critic.
" The turmoil of battle no doubt diverts temporarily
the mind of the nation from artistic questions and
the artist suffers for the moment; but as art is
certainly the expression of a national sentiment it
is stimulated by war in just the same degree as are
all the other national aspirations."

" Do you really believe that war benefits art in
the long run?" questioned the Plain Man. "I
should have said that war wiped out art so com-
pletely that the artist had as a matter of fact to
begin again and to build up art once more from its
very foundation."

national spirit," said the Critic; "but there is, I am
certain, no permanent harm done to art by the
spread of warlike sentiment. Indeed, I am sure it
is helped to shed the parasitic trivialities which
have grown about it in times of peace and that it
is strengthened and purified for the work it has to
do."

"And when its opportunity comes again it is,
you mean, in a better condition than it was before
to make the most of it," suggested the Man with
the Red Tie.

"Precisely; that is just what I do mean," agreed
the Critic. "In times of peace, art, like all the
other national ideas, becomes stereotyped and
somnolent; it loses its initiative, it is thrown back
upon itself, and it wastes its energies in petty
squabbles. The rude shock of war makes it suffer,
but out of the suffering there presently emerges a
higher and more manly ideal, and the striving to
realise this ideal leads to finer and more vital
accomplishment."

"That seems to me to be nothing more than
pretty sentiment," sneered the Plain Man. "What
I should like to know is where the practical result
comes in."

"Where, perhaps, you would least expect it,"
replied the Critic; "in the competition among
nations. The industrial arts of a country are the
most likely of all to lose their vitality when that
country has been living for a long period in peace
and prosperity; and when the industrial arts of a
nation weaken it is almost certain to be driven out
of the commercial field by other nations which are
more energetic and more progressive. The sudden
transition from peace to war rouses the fighting
spirit of the people and renews in it the idea that it
must make great efforts if it is to be successful in
maintaining its place."

"It is reminded, in fact, that commercial com-
petition is, or should be, a perpetual state of war,
and that ' eternal vigilance' must be the watch-
word if it is to be effective," commented the Man
with the Red Tie.

" That is exactly what I mean," said the Critic ;
"and it is particularly in the industrial arts that
the greatest victories of one nation over another
can be won. The stimulus of nations at war rouses
the leaders of art to fight their own battles, to
organise their own forces, to seize the opportunities
that are offered to them, and by sound strategy to
recover the positions from which they have been
driven. That is the way in which war helps
art and the history of all great nations furnishes
confirmatory evidence." The Lay Figure.