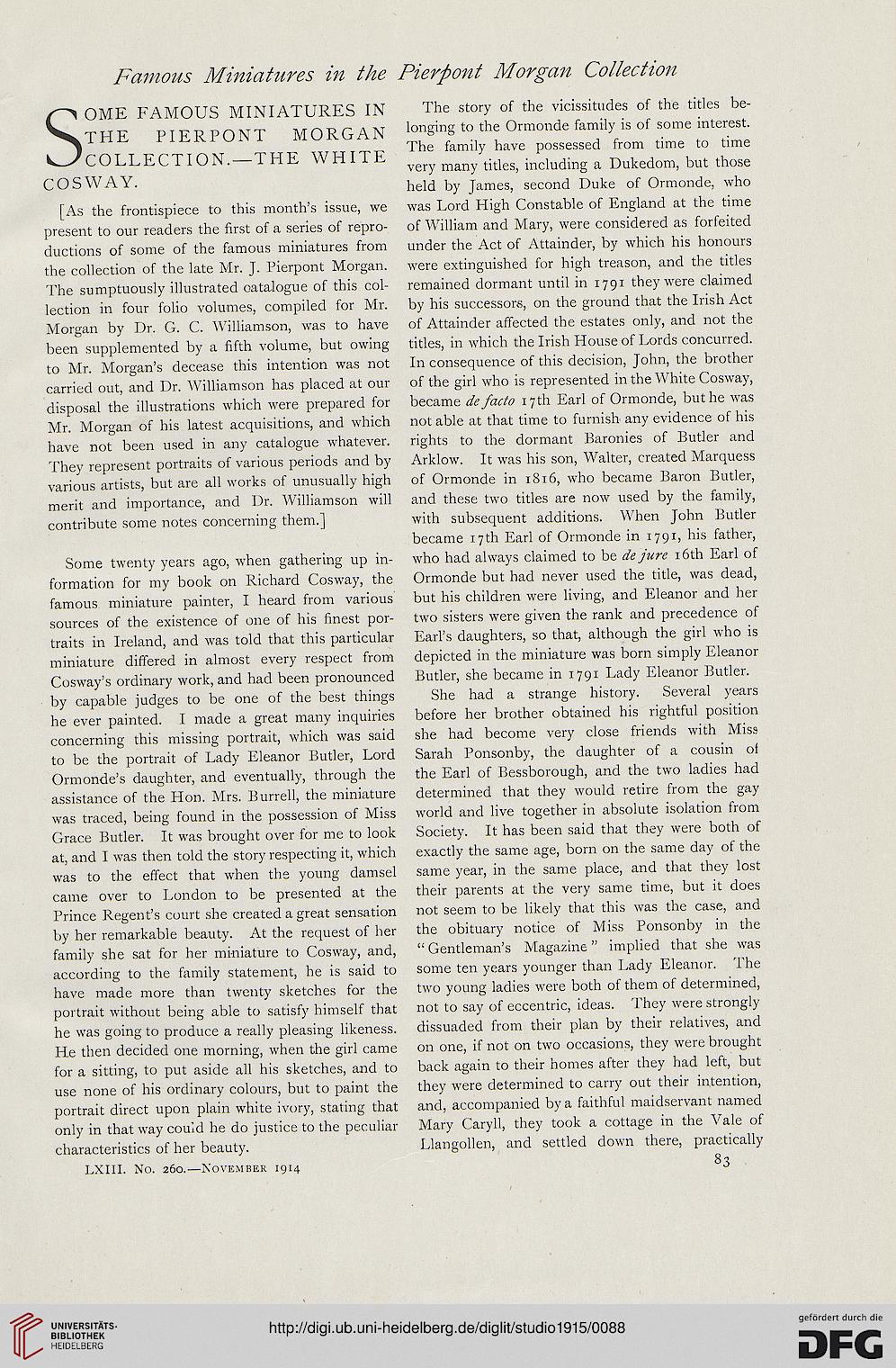 SOME FAMOUS MINIATURES IN
THE PIERPONT MORGAN
COLLECTION.—THE WHITE
COSWAY.

[As the frontispiece to this month's issue, we
present to our readers the first of a series of repro-
ductions of some of the famous miniatures from
the collection of the late Mr. J. Pierpont Morgan.
The sumptuously illustrated catalogue of this col-
lection in four folio volumes, compiled for Mr.
Morgan by Dr. G. C. Williamson, was to have
been supplemented by a fifth volume, but owing
to Mr. Morgan's decease this intention was not
carried out, and Dr. Williamson has placed at our
disposal the illustrations which were prepared for
Mr. Morgan of his latest acquisitions, and which
have not been used in any catalogue whatever.
They represent portraits of various periods and by
various artists, but are all works of unusually high
merit and importance, and Dr. Williamson will
contribute some notes concerning them.]

Some twenty years ago, when gathering up in-
formation for my book on Richard Cosway, the
famous miniature painter, I heard from various
sources of the existence of one of his finest por-
traits in Ireland, and was told that this particular
miniature differed in almost every respect from
Cosway's ordinary work, and had been pronounced
by capable judges to be one of the best things
he ever painted. I made a great many inquiries
concerning this missing portrait, which was said
to be the portrait of Lady Eleanor Butler, Lord
Ormonde's daughter, and eventually, through the
assistance of the Hon. Mrs. Eurrell, the miniature
was traced, being found in the possession of Miss
Grace Butler. It was brought over for me to look
at, and I was then told the story respecting it, which
was to the effect that when the young damsel
came over to London to be presented at the
Prince Regent's court she created a great sensation
by her remarkable beauty. At the request of her
family she sat for her miniature to Cosway, and,
according to the family statement, he is said to
have made more than twenty sketches for the
portrait without being able to satisfy himself that
he was going to produce a really pleasing likeness.
He then decided one morning, when the girl came
for a sitting, to put aside all his sketches, and to
use none of his ordinary colours, but to paint the
portrait direct upon plain white ivory, stating that
only in that way could he do justice to the peculiar
characteristics of her beauty.

The story of the vicissitudes of the titles be-
longing to the Ormonde family is of some interest.
The family have possessed from time to time
very many titles, including a Dukedom, but those
held by James, second Duke of Ormonde, who
was Lord High Constable of England at the time
of William and Mary, were considered as forfeited
under the Act of Attainder, by which his honours
were extinguished for high treason, and the titles
remained dormant until in 1791 they were claimed
by his successors, on the ground that the Irish Act
of Attainder affected the estates only, and not the
titles, in which the Irish House of Lords concurred.
In consequence of this decision, John, the brother
of the girl who is represented in the White Cosway,
became de facto 17th Earl of Ormonde, but he was
not able at that time to furnish any evidence of his
rights to the dormant Baronies of Butler and
Arklow. It was his son, Walter, created Marquess
of Ormonde in 1816, who became Baron Butler,
and these two titles are now used by the family,
with subsequent additions. When John Butler
became 17th Earl of Ormonde in 1791, his father,
who had always claimed to be de jure 16th Earl of
Ormonde but had never used the title, was dead,
but his children were living, and Eleanor and her
two sisters were given the rank and precedence of
Earl's daughters, so that, although the girl who is
depicted in the miniature was born simply Eleanor
Butler, she became in 1791 Lady Eleanor Butler.

She had a strange history. Several years
before her brother obtained his rightful position
she had become very close friends with Miss
Sarah Ponsonby, the daughter of a cousin of
the Earl of Bessborough, and the two ladies had
determined that they would retire from the gay
world and live together in absolute isolation from
Society. It has been said that they were both of
exactly the same age, born on the same day of the
same year, in the same place, and that they lost
their parents at the very same time, but it does
not seem to be likely that this was the case, and
the obituary notice of Miss Ponsonby in the
" Gentleman's Magazine" implied that she was
some ten years younger than Lady Eleanor. The
two young ladies were both of them of determined,
not to say of eccentric, ideas. They were strongly
dissuaded from their plan by their relatives, and
on one, if not on two occasions, they were brought
back again to their homes after they had left, but
they were determined to carry out their intention,
and, accompanied by a faithful maidservant named
Mary Caryll, they took a cottage in the Vale of
Llangollen, and settled down there, practically