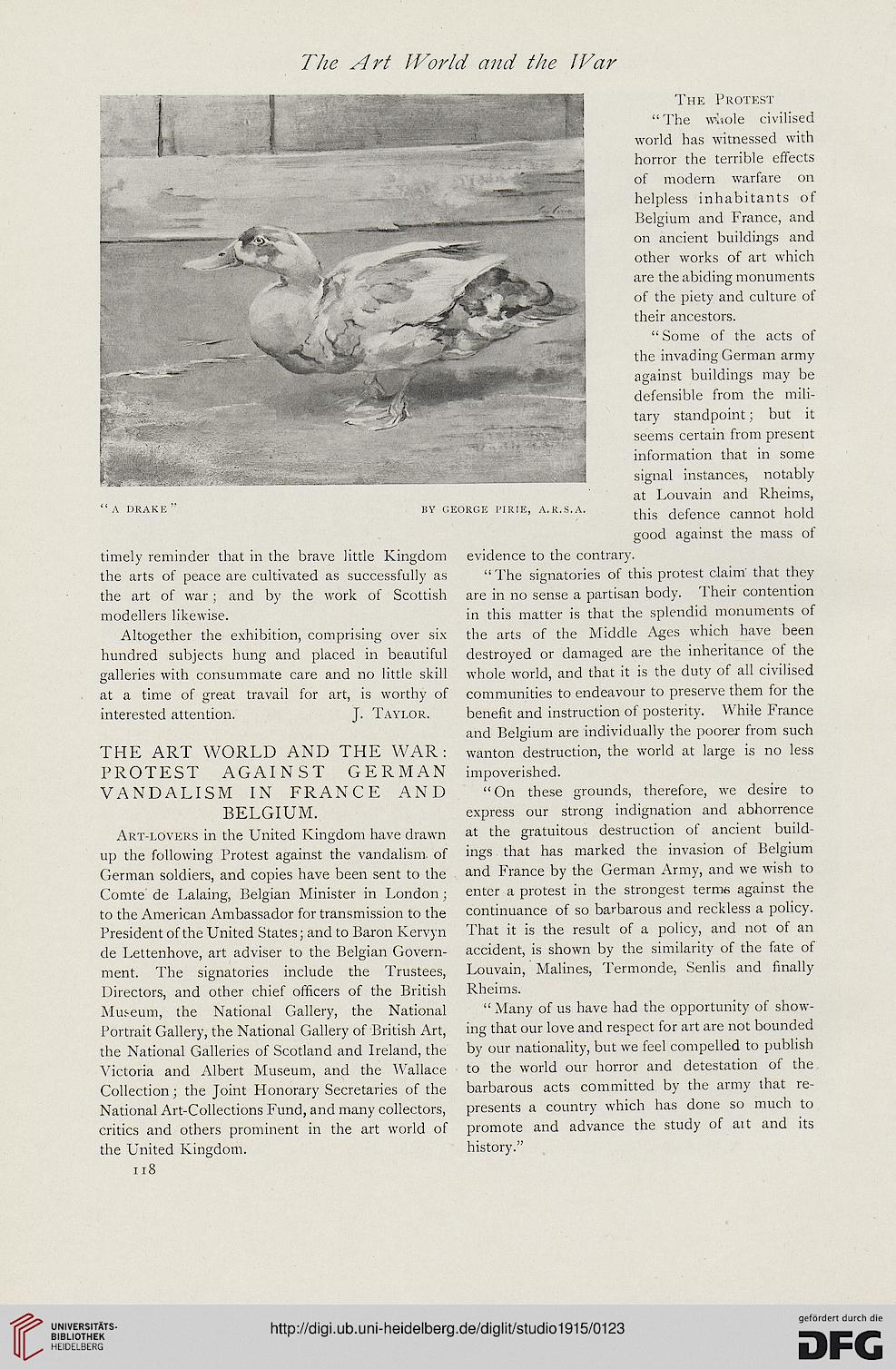 Hinweise zum OCR-Text
The Art World and the JVar

The Protest
" The wliole civilised
world has witnessed with
horror the terrible effects
of modern warfare on
helpless inhabitants of
Belgium and France, and
on ancient buildings and
other works of art which
are the abiding monuments
of the piety and culture of
their ancestors.

" Some of the acts of
the invading German army
against buildings may be
defensible from the mili-
tary standpoint; but it
seems certain from present
information that in some
signal instances, notably
at Louvain and Rheims,

good against the mass of

timely reminder that in the brave little Kingdom evidence to the contrary.

the art of war ; and by the work of Scottish are in no sense a partisan body. Their contention

modellers likewise. in this matter is that the splendid monuments of

Altogether the exhibition, comprising over six the arts of the Middle Ages which have been

galleries with consummate care and no little skill whole world, and that it is the duty of all civilised

at a time of great travail for art, is worthy of communities to endeavour to preserve them for the

and Belgium are individually the poorer from such

THE ART WORLD AND THE WAR: wanton destruction, the world at large is no less

VANDALISM IN FRANCE AND "On these grounds, therefore, we desire to
BELGIUM. express our strong indignation and abhorrence
Art-lovers in the United Kingdom have drawn at the gratuitous destruction of ancient build-
up the following Protest against the vandalism of ings that has marked the invasion of Belgium
German soldiers, and copies have been sent to the and France by the German Army, and we wish to
Comte de Lalaing, Belgian Minister in London; enter a protest in the strongest terms against the
to the American Ambassador for transmission to the continuance of so barbarous and reckless a policy.
President of the United States; and to Baron Kervyn That it is the result of a policy, and not of an
de Lettenhove, art adviser to the Belgian Govern- accident, is shown by the similarity of the fate of
ment. The signatories include the Trustees, Louvain, Malines, Termonde, Senlis and finally
Directors, and other chief officers of the British Rheims.

Mui-eum, the National Gallery, the National " Many of us have had the opportunity of show-
Portrait Gallery, the National Gallery of British Art, ing that our love and respect for art are not bounded
the National Galleries of Scotland and Ireland, the by our nationality, but we feel compelled to publish
Victoria and Albert Museum, and the Wallace to the world our horror and detestation of the
Collection ; the Joint Honorary Secretaries of the barbarous acts committed by the army that re-
National Art-Collections Fund, and many collectors, presents a country which has done so much to
critics and others prominent in the art world of promote and advance the study of ait and its
the United Kingdom. history."
118