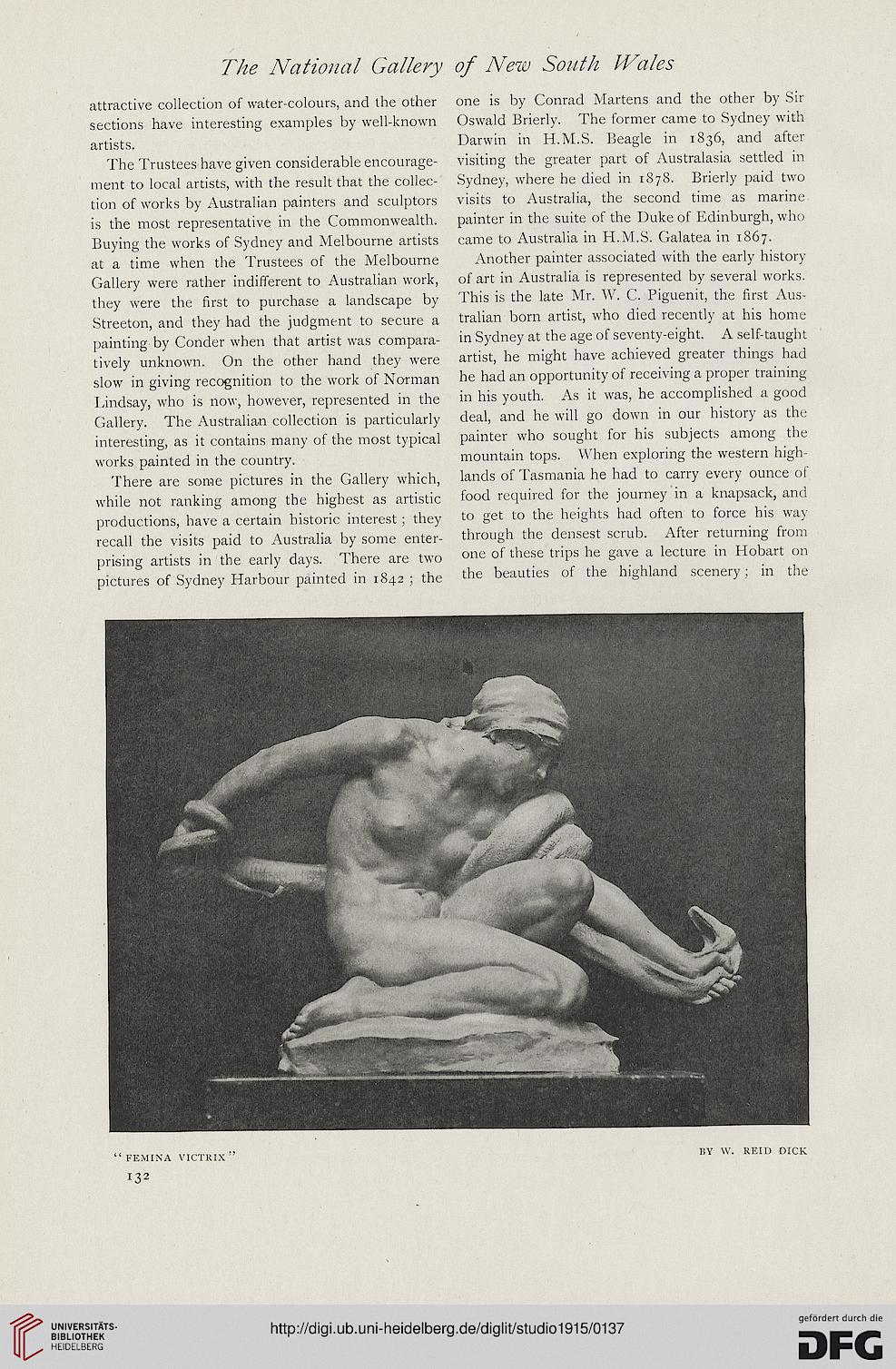 attractive collection of water-colours, and the other one is by Conrad Martens and the other by Sir
sections have interesting examples by well-known Oswald Brierly. The former came to Sydney with
artists. Darwin in H.M.S. Beagle in 1836, and after
The Trustees have given considerable encourage- visiting the greater part of Australasia settled in
ment to local artists, with the result that the collec- Sydney, where he died in 1878. Brierly paid two
tion of works by Australian painters and sculptors visits to Australia, the second time as marine
is the most representative in the Commonwealth, painter in the suite of the Duke of Edinburgh, who
Buying the works of Sydney and Melbourne artists came to Australia in H.M.S. Galatea in 1867.
at a time when the Trustees of the Melbourne Another painter associated with the early history
Gallery were rather indifferent to Australian work, of art in Australia is represented by several works,
they were the first to purchase a landscape by This is the late Mr. W. C. Piguenit, the first Aus-
Streeton, and they had the judgment to secure a tralian born artist, who died recently at his home
painting by Conder when that artist was compara- in Sydney at the age of seventy-eight. A self-taught
tively unknown. On the other hand they were artist, he might have achieved greater things had
slow in giving recognition to the work of Norman he had an opportunity of receiving a proper training
Lindsay, who is now, however, represented in the in his youth. As it was, he accomplished a good
Gallery. The Australian collection is particularly deal, and he will go down in our history as the
interesting, as it contains many of the most typical painter who sought for his subjects among the
works painted in the country. mountain tops. When exploring the western high-
There are some pictures in the Gallery which, lands of Tasmania he had to carry every ounce of
while not ranking among the highest as artistic food required for the journey in a knapsack, and
productions, have a certain historic interest ; they to get to the heights had often to force his way
recall the visits paid to Australia by some enter- through the densest scrub. After returning from
prising artists in the early days. There are two one of these triPs he gave a lecture in Hobart on
pictures of Sydney Harbour painted in 1842 ; the the beauties of the highland scenery; in the