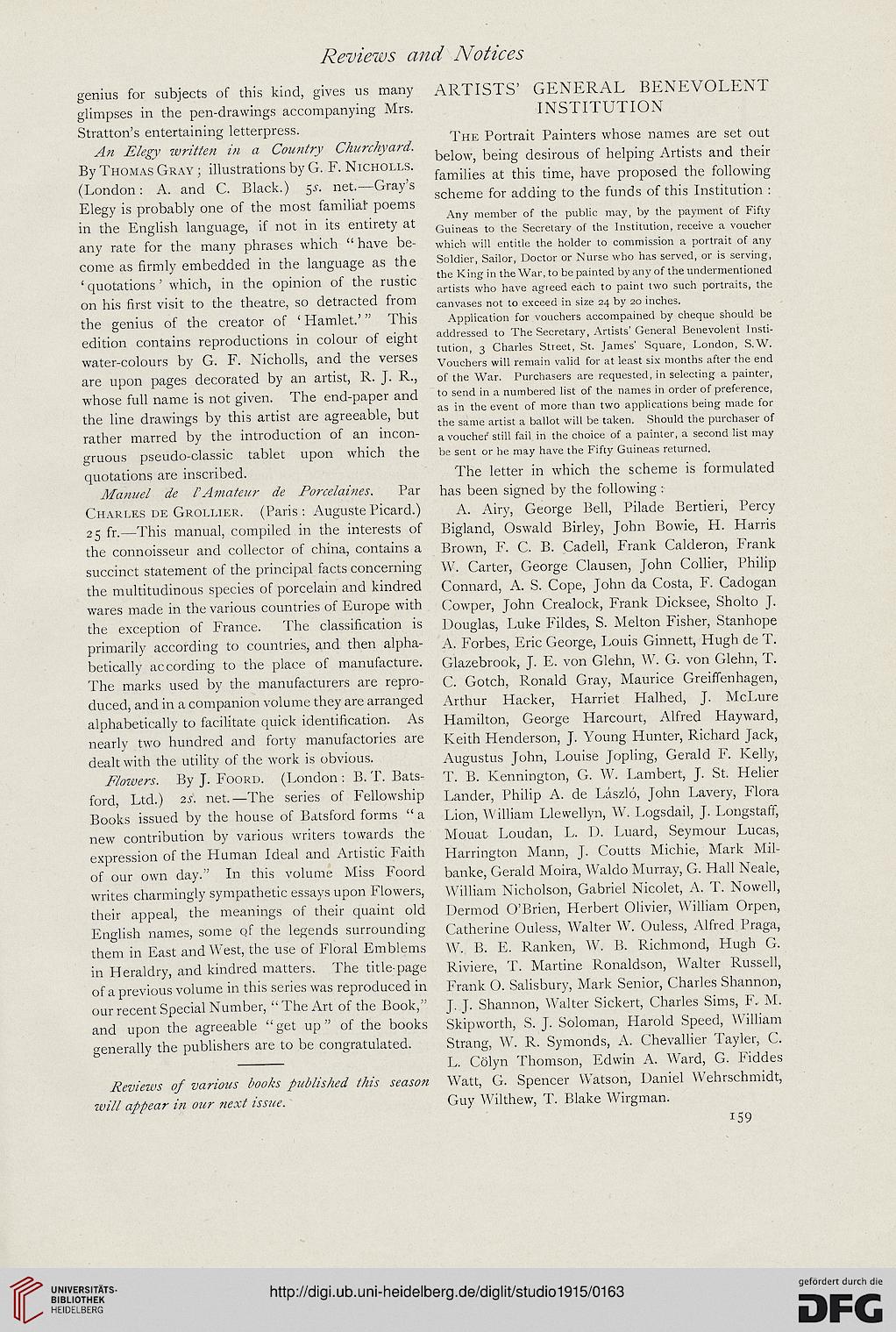 genius for subjects of this kind, gives us many
glimpses in the pen-drawings accompanying Mrs.
Stratton's entertaining letterpress.

An Elegy written in a Country Churchyard.
By Thomas Gray ; illustrations by G. F. Nicholls.
(London: A. and C. Black.) $s. net.—Gray's
Elegy is probably one of the most familiat poems
in the English language, if not in its entirety at
any rate for the many phrases which " have be-
come as firmly embedded in the language as the
' quotations' which, in the opinion of the rustic
on his first visit to the theatre, so detracted from
the genius of the creator of ' Hamlet'" This
edition contains reproductions in colour of eight
water-colours by G. F. Nicholls, and the verses
are upon pages decorated by an artist, R. J. R.,
whose full name is not given. The end-paper and
the line drawings by this artist are agreeable, but
rather marred by the introduction of an incon-
gruous pseudo-classic tablet upon which the
quotations are inscribed.

Manuel de 1 Amateur de Porcelaines. Par
Charles de Grollier. (Paris: Auguste Picard.)
25 fr.—This manual, compiled in the interests of
the connoisseur and collector of china, contains a
succinct statement of the principal facts concerning
the multitudinous species of porcelain and kindred
wares made in the various countries of Europe with
the exception of France. The classification is
primarily according to countries, and then alpha-
betically according to the place of manufacture.
The marks used by the manufacturers are repro-
duced, and in a companion volume they are arranged
alphabetically to facilitate quick identification. As
nearly two hundred and forty manufactories are
dealt with the utility of the work is obvious.

Flowers. By J. Foord. (London : B. T. Bats-
ford, Ltd.) 2s. net.—The series of Fellowship
Books issued by the house of Batsford forms " a
new contribution by various writers towards the
expression of the Human Ideal and Artistic Faith
of our own day." In this volume Miss Foord
writes charmingly sympathetic essays upon Flowers,
their appeal, the meanings of their quaint old
English names, some of the legends surrounding
them in East and West, the use of Floral Emblems
in Heraldry, and kindred matters. The title-page
of a previous volume in this series was reproduced in
our recent Special Number, " The Art of the Book,"
and upon the agreeable " get up " of the books
generally the publishers are to be congratulated.

Reviews of various books published this season
will appear in our next issue.

The Portrait Painters whose names are set out
below, being desirous of helping Artists and their
families at this time, have proposed the following
scheme for adding to the funds of this Institution :

Any member of the public may, by the payment of Fifty
Guineas to the Secretary of the Institution, receive a voucher
which will entitle the holder to commission a portrait of any
Soldier, Sailor, Doctor or Nurse who has served, or is serving,
the King in the War, to be painted by any of the undermentioned
artists who have agreed each to paint two such portraits, the
canvases not to exceed in size 24 by 20 inches.

Application for vouchers accompained by cheque should be
addressed to The Secretary, Artists' General Benevolent Insti-
tution, 3 Charles Street, St. James' Square, London, S.W.
Vouchers will remain valid for at least six months after the end
of the War. Purchasers are requested, in selecting a painter,
to send in a numbered list of the names in order of preference,
as in the event of more than two applications being made for
the same artist a ballot will be taken. Should the purchaser of
a voucher still fail in the choice of a painter, a second list may
be sent or lie may have the Fifty Guineas returned.

The letter in which the scheme is formulated
has been signed by the following :