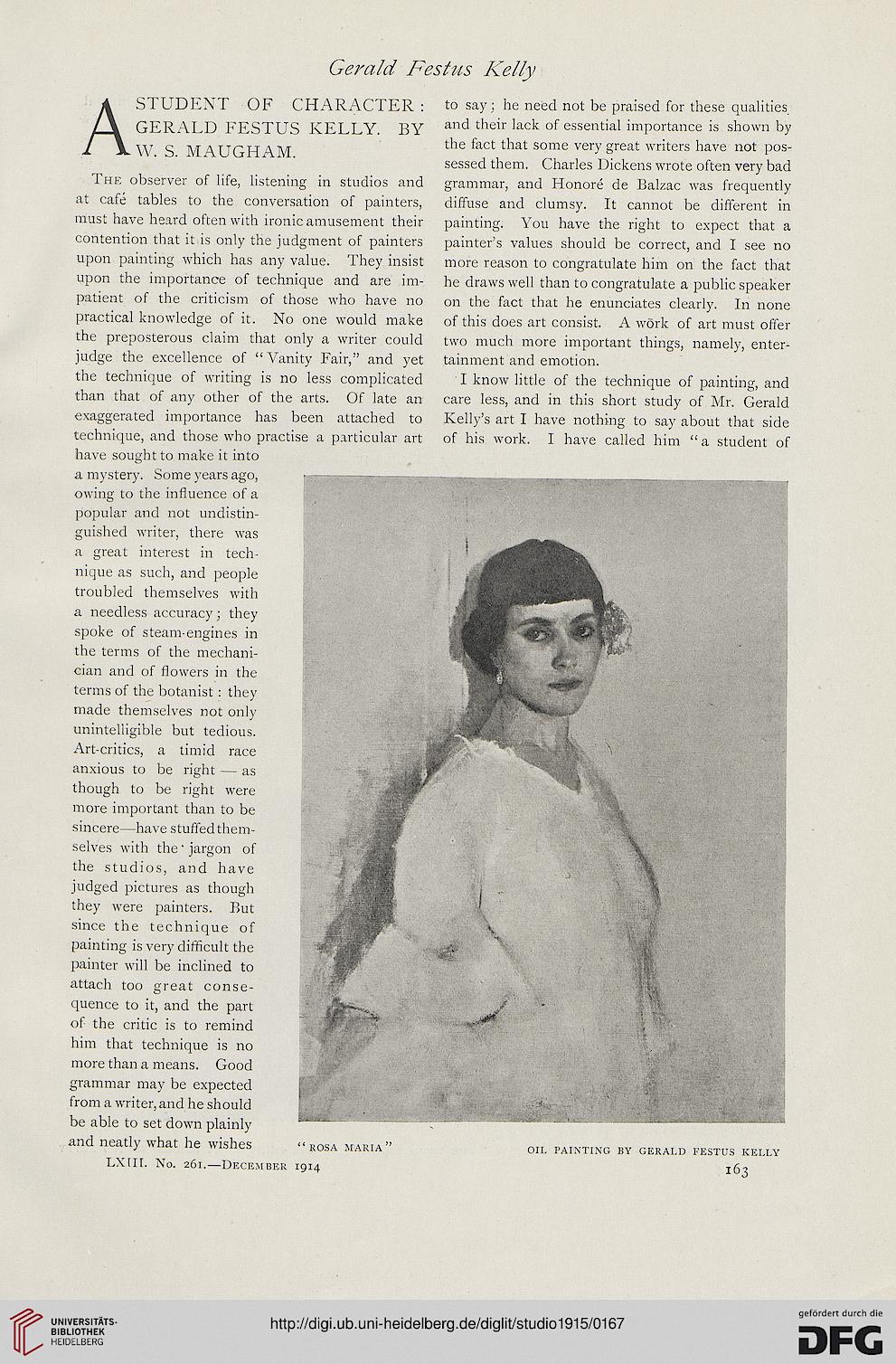 ASTUDENT OF CHARACTER : to say; he need not be praised for these qualities
GER ;\LD FESTUS KELLY BY an<^ their 'ac^ °f essential importance is shown by
W S MAUGHAM the fact that some very great writers have not pos-
sessed them. Charles Dickens wrote often very bad
The observer of life, listening in studios and grammar, and Honore de Balzac was frequently
at cafe tables to the conversation of painters, diffuse and clumsy. It cannot be different in
must have heard often with ironic amusement their painting. You have the right to expect that a
contention that it is only the judgment of painters painter's values should be correct, and I see no
upon painting which has any value. They insist more reason to congratulate him on the fact that
upon the importance of technique and are jm- he draws well than to congratulate a public speaker
patient of the criticism of those who have no on the fact that he enunciates clearly. In none
practical knowledge of it. No one would make of this does art consist. A work of art must offer
the preposterous claim that only a writer could two much more important things, namely, enter-
judge the excellence of "Vanity Fair," and yet tainment and emotion.

than that of any other of the arts. Of late an care less, and in this short study of Mr. Gerald

technique, and those who practise a particular art of his work. I have called him "a student of
have sought to make it into

owing to the influence of a
popular and not undistin-

made themselves not only
unintelligible but tedious.
Art-critics, a timid race
anxious to be right — as
though to be right were
more important than to be
sincere—have stuffed them-
selves with the ' jargon of V
the studios, and have
judged pictures as though
they were painters. But

since the technique of W S,

painting is very difficult the ifnaB^ .,-/••

painter will be inclined to
attach too great conse-
quence to it, and the part J
of the critic is to remind
him that technique is no
more than a means. Good
grammar may be expected
from a writer, and he should
be able to set down plainly
and neatly what he wishes " rosa maria" oil painting by gerai.d festus kelly