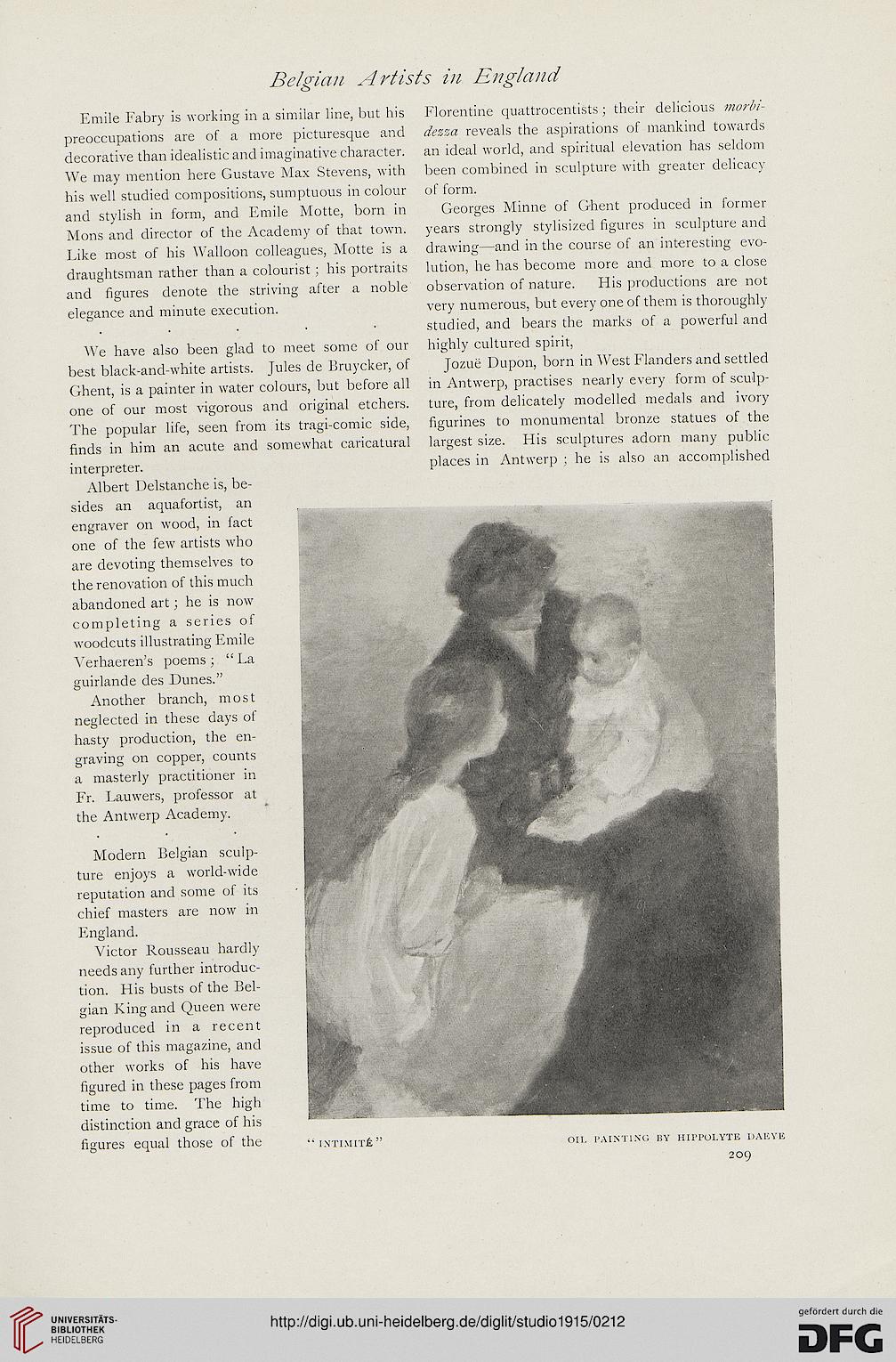 Emile Fabry is working in a similar line, but his Florentine quattrocentists ; their delicious morbi-
preoccupations are of a more picturesque and dezza reveals the aspirations of mankind towards
decorative than idealistic and imaginative character, an ideal world, and spiritual elevation has seldom
We may mention here Gustave Max Stevens, with been combined in sculpture with greater delicacy
his well studied compositions, sumptuous in colour of form.

and stylish in form, and Emile Motte, born in Georges Minne of Ghent produced in former
Mons and director of the Academy of that town, years strongly stylisized figures in sculpture and
Like most of his Walloon colleagues, Motte is a drawing—and in the course of an interesting evo-
draughtsman rather than a colourist; his portraits lution, he has become more and more to a close
and figures denote the striving after a noble observation of nature. His productions are not
elegance and minute execution. very numerous, but every one of them is thoroughly

studied, and bears the marks of a powerful and

We have also been glad to meet some of our highly cultured spirit,
best black-and-white artists. Jules de Bruycker, of Jozue Dupon, born in West Flanders and settled
Ghent, is a painter in water colours, but before all in Antwerp, practises nearly every form of sculp-
one of our most vigorous and original etchers, ture, from delicately modelled medals and ivory
The popular life, seen from its tragi-comic side, figurines to monumental bronze statues of the
finds in him an acute and somewhat caricatural largest size. His sculptures adorn many public
interpreter. places in Antwerp ; he is also an accomplished

Albert Uelstanche is, be-
sides an aquafortist, an
engraver on wood, in fact
one of the few artists who
are devoting themselves to
the renovation of this much
abandoned art; he is now
completing a series of
woodcuts illustrating Emile
Verhaeren's poems; "La
guirlande des Dunes."

Another branch, most
neglected in these days of
hasty production, the en-
graving on copper, counts
a masterly practitioner in
Fr. Lauwers, professor at
the Antwerp Academy.

Modern Belgian sculp-
ture enjoys a world-wide
reputation and some of its
chief masters are now in
England.

Victor Rousseau hardly
needs any further introduc-
tion. His busts of the Bel-
gian King and Queen were
reproduced in a recent
issue of this magazine, and
other works of his have
figured in these pages from
time to time. The high
distinction and grace of his
figures equal those of the "intimitis" oil painting by hippglytb dabye