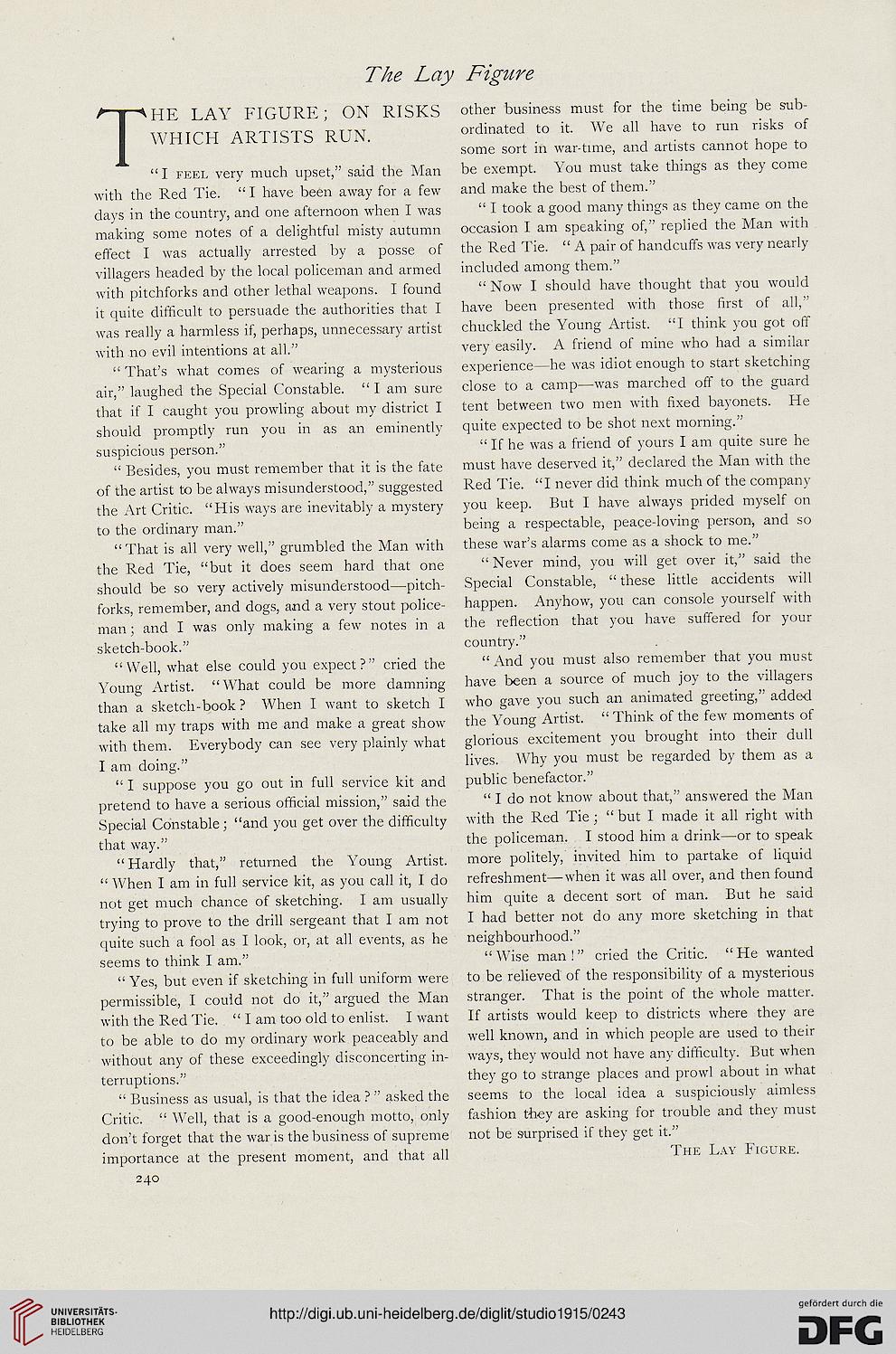 THE LAY FIGURE; ON RISKS
WHICH ARTISTS RUN.

"I feel very much upset," said the Man
with the Red Tie. " I have been away for a few
days in the country, and one afternoon when I was
making some notes of a delightful misty autumn
effect I was actually arrested by a posse of
villagers headed by the local policeman and armed
with pitchforks and other lethal weapons. I found
it quite difficult to persuade the authorities that I
was really a harmless if, perhaps, unnecessary artist
with no evil intentions at all."

" That's what comes of wearing a mysterious
air," laughed the Special Constable. " I am sure
that if I caught you prowling about my district I
should promptly run you in as an eminently
suspicious person."

" Besides, you must remember that it is the fate
of the artist to be always misunderstood," suggested
the Art Critic. "His ways are inevitably a mystery
to the ordinary man."

"That is all very well," grumbled the Man with
the Red Tie, "but it does seem hard that one
should be so very actively misunderstood—pitch-
forks, remember, and dogs, and a very stout police-
man ; and I was only making a few notes in a
sketch-book."

"Well, what else could you expect?" cried the
Young Artist. "What could be more damning
than a sketch-book ? When I want to sketch I
take all my traps with me and make a great show
with them. Everybody can see very plainly what
I am doing."

" I suppose you go out in full service kit and
pretend to have a serious official mission," said the
Special Constable; "and you get over the difficulty
that way."

"Hardly that," returned the Young Artist.
" When I am in full service kit, as you call it, I do
not get much chance of sketching. I am usually
trying to prove to the drill sergeant that I am not
quite such a fool as I look, or, at all events, as he
seems to think I am."

" Yes, but even if sketching in full uniform were
permissible, I could not do it," argued the Man
with the Red Tie. " I am too old to enlist. I want
to be able to do my ordinary work peaceably and
without any of these exceedingly disconcerting in-
terruptions."

" Business as usual, is that the idea ? " asked the
Critic. " Well, that is a good-enough motto, only
don't forget that the war is the business of supreme
importance at the present moment, and that all
240

other business must for the time being be sub-
ordinated to it. We all have to run risks of
some sort in war-time, and artists cannot hope to
be exempt. You must take things as they come
and make the best of them."

" I took a good many things as they came on the
occasion I am speaking of," replied the Man with
the Red Tie. " A pair of handcuffs was very nearly
included among them."

" Now I should have thought that you would
have been presented with those first of all,"
chuckled the Young Artist. "I think you got off
very easily. A friend of mine who had a similar
experience—he was idiot enough to start sketching
close to a camp—was marched off to the guard
tent between two men with fixed bayonets. He
quite expected to be shot next morning."

" If he was a friend of yours I am quite sure he
must have deserved it," declared the Man with the
Red Tie. "I never did think much of the company
you keep. But I have always prided myself on
being a respectable, peace-loving person, and so
these war's alarms come as a shock to me."

" Never mind, you will get over it," said the
Special Constable, " these little accidents will
happen. Anyhow, you can console yourself with
the reflection that you have suffered for your
country."

"And you must also remember that you must
have been a source of much joy to the villagers
who gave you such an animated greeting," added
the Young Artist. " Think of the few moments of
glorious excitement you brought into their dull
lives. Why you must be regarded by them as a
public benefactor."

" I do not know about that," answered the Man
with the Red Tie ; " but I made it all right with
the policeman. I stood him a drink—or to speak
more politely, invited him to partake of liquid
refreshment—when it was all over, and then found
him quite a decent sort of man. But he said
I had better not do any more sketching in that
neighbourhood."

" Wise man ! " cried the Critic. " He wanted
to be relieved of the responsibility of a mysterious
stranger. That is the point of the whole matter.
If artists would keep to districts where they are
well known, and in which people are used to their
ways, they would not have any difficulty. But when
they go to strange places and prowl about in what
seems to the local idea a suspiciously aimless
fashion they are asking for trouble and they must
not be surprised if they get it."