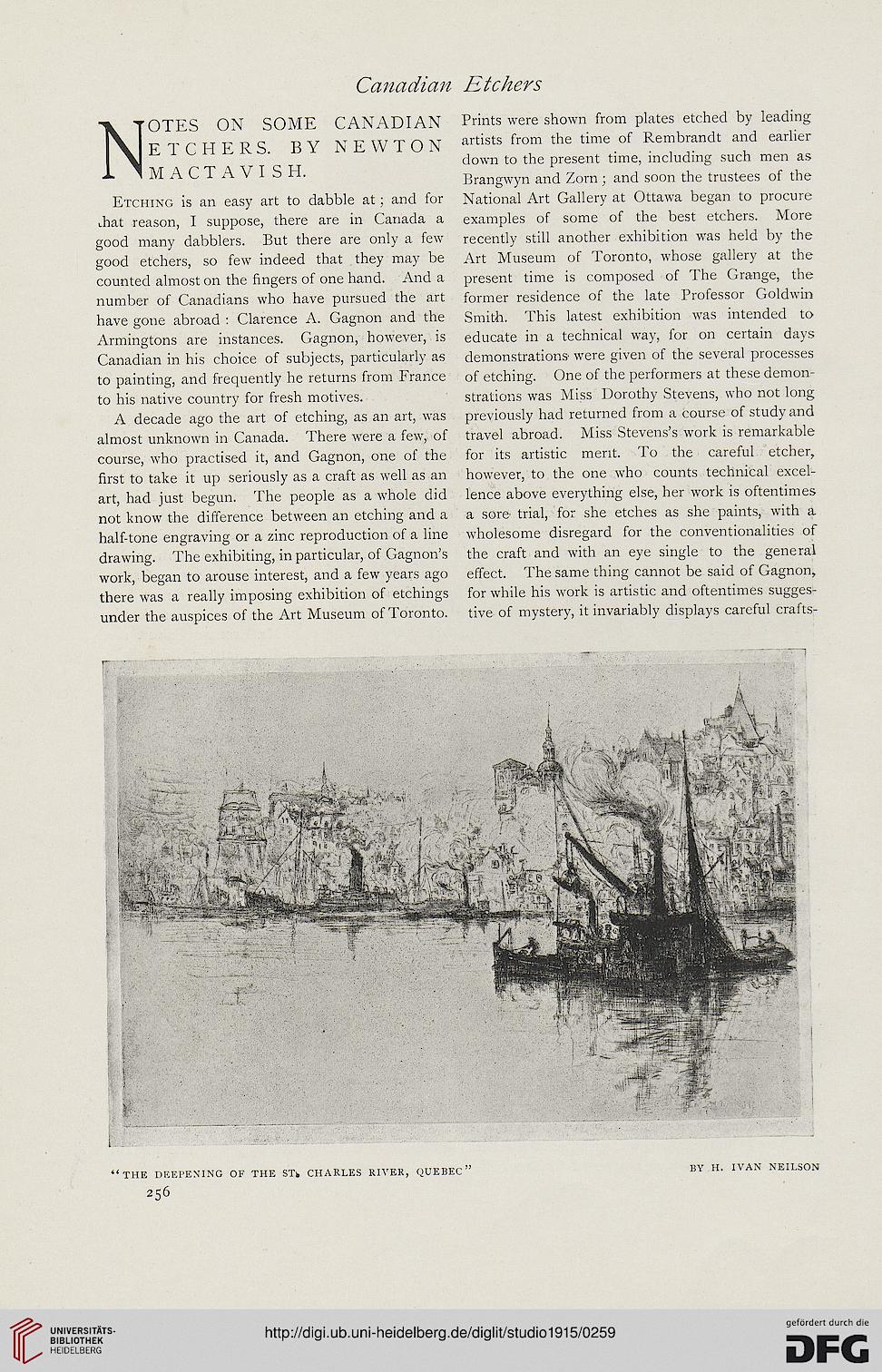 OTES ON SOME CANADIAN
ETCHERS. BY NEWTON
MACTAVISH.

Etching is an easy art to dabble at; and for
Jiat reason, I suppose, there are in Canada a
good many dabblers. But there are only a few
good etchers, so few indeed that they may be
counted almost on the fingers of one hand. And a
number of Canadians who have pursued the art
have gone abroad : Clarence A. Gagnon and the
Armingtons are instances. Gagnon, however, is
Canadian in his choice of subjects, particularly as
to painting, and frequently he returns from France
to his native country for fresh motives.

A decade ago the art of etching, as an art, was
almost unknown in Canada. There were a few, of
course, who practised it, and Gagnon, one of the
first to take it up seriously as a craft as well as an
art, had just begun. The people as a whole did
not know the difference between an etching and a
half-tone engraving or a zinc reproduction of a line
drawing. The exhibiting, in particular, of Gagnon's
work, began to arouse interest, and a few years ago
there was a really imposing exhibition of etchings
under the auspices of the Art Museum of Toronto.

Prints were shown from plates etched by leading
artists from the time of Rembrandt and earlier
down to the present time, including such men as
Brangwyn and Zorn ; and soon the trustees of the
National Art Gallery at Ottawa began to procure
examples of some of the best etchers. More
recently still another exhibition was held by the
Art Museum of Toronto, whose gallery at the
present time is composed of The Grange, the
former residence of the late Professor Goldwin
Smith. This latest exhibition was intended to
educate in a technical way, for on certain days
demonstrations were given of the several processes
of etching. One of the performers at these demon-
strations was Miss Dorothy Stevens, who not long
previously had returned from a course of study and
travel abroad. Miss Stevens's work is remarkable
for its artistic merit. To the careful etcher,
however, to the one who counts technical excel-
lence above everything else, her work is oftentimes
a sore1 trial, for she etches as she paints, with a
wholesome disregard for the conventionalities of
the craft and with an eye single to the general
effect. The same thing cannot be said of Gagnon,
for while his work is artistic and oftentimes sugges-
tive of mystery, it invariably displays careful crafts-

" THE DEEPENING OF THE STk CHARLES RIVER, QUEBEC"
256