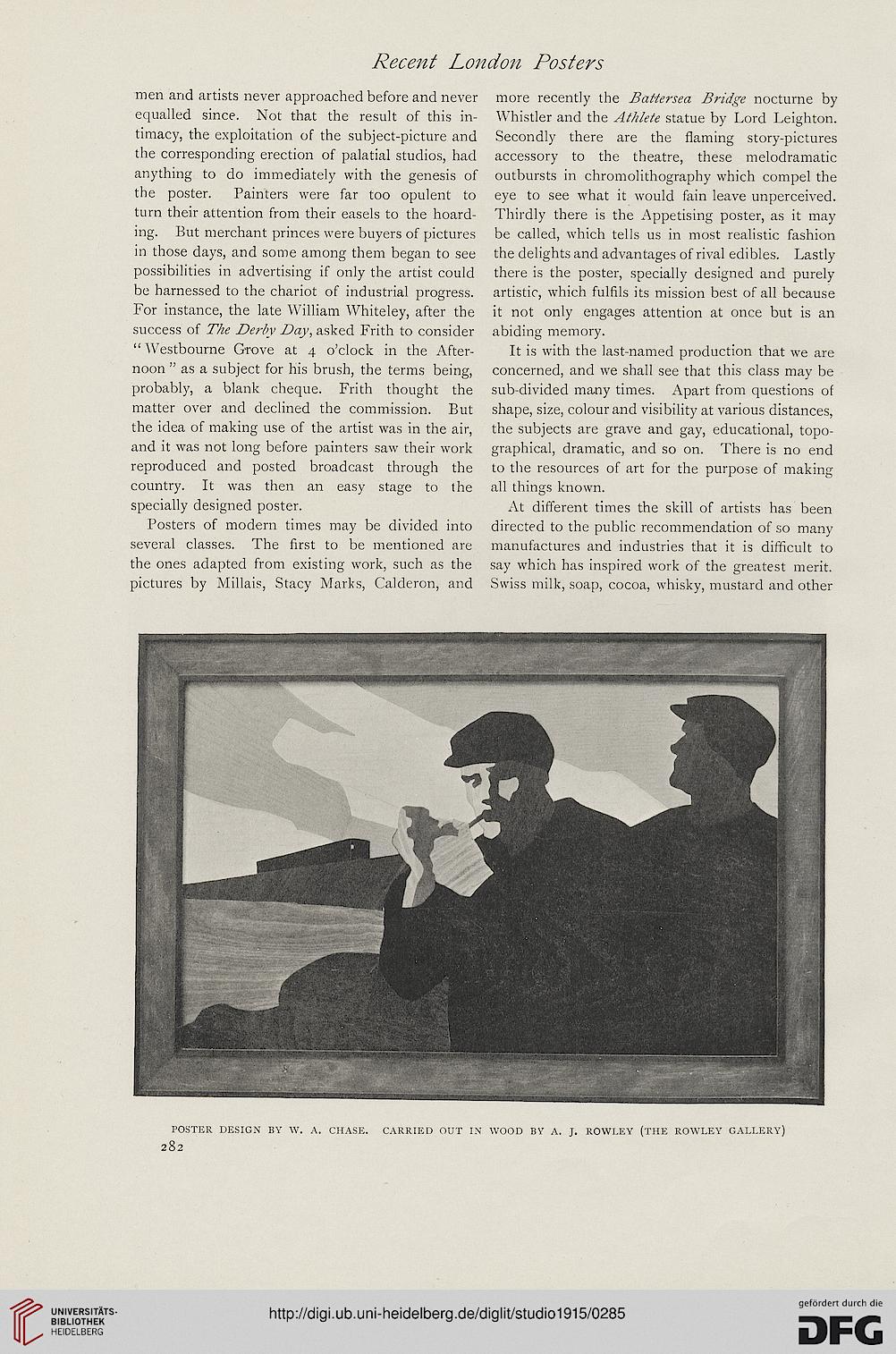 men and artists never approached before and never
equalled since. Not that the result of this in-
timacy, the exploitation of the subject-picture and
the corresponding erection of palatial studios, had
anything to do immediately with the genesis of
the poster. Painters were far too opulent to
turn their attention from their easels to the hoard-
ing. But merchant princes were buyers of pictures
in those days, and some among them began to see
possibilities in advertising if only the artist could
be harnessed to the chariot of industrial progress.
For instance, the late William Whiteley, after the
success of The Derby Day, asked Frith to consider
" Westbourne Grove at 4 o'clock in the After-
noon " as a subject for his brush, the terms being,
probably, a blank cheque. Frith thought the
matter over and declined the commission. But
the idea of making use of the artist was in the air,
and it was not long before painters saw their work
reproduced and posted broadcast through the
country. It was then an easy stage to the
specially designed poster.

Posters of modern times may be divided into
several classes. The first to be mentioned are
the ones adapted from existing work, such as the
pictures by Millais, Stacy Marks, Calderon, and

more recently the Batiersea Bridge nocturne by
Whistler and the Athlete statue by Lord Leighton.
Secondly there are the flaming story-pictures
accessory to the theatre, these melodramatic
outbursts in chromolithography which compel the
eye to see what it would fain leave unperceived.
Thirdly there is the Appetising poster, as it may
be called, which tells us in most realistic fashion
the delights and advantages of rival edibles. Lastly
there is the poster, specially designed and purely
artistic, which fulfils its mission best of all because
it not only engages attention at once but is an
abiding memory.

It is with the last-named production that we are
concerned, and we shall see that this class may be
sub-divided many times. Apart from questions of
shape, size, colour and visibility at various distances,
the subjects are grave and gay, educational, topo-
graphical, dramatic, and so on. There is no end
to the resources of art for the purpose of making
all things known.

At different times the skill of artists has been
directed to the public recommendation of so many
manufactures and industries that it is difficult to
say which has inspired work of the greatest merit.
Swiss milk, soap, cocoa, whisky, mustard and other

POSTER DESIGN BY W. A. CHASE. CARRIED OUT IN WOOD BY A. J. ROWLEY (THE ROWLEY GALLERY)
282