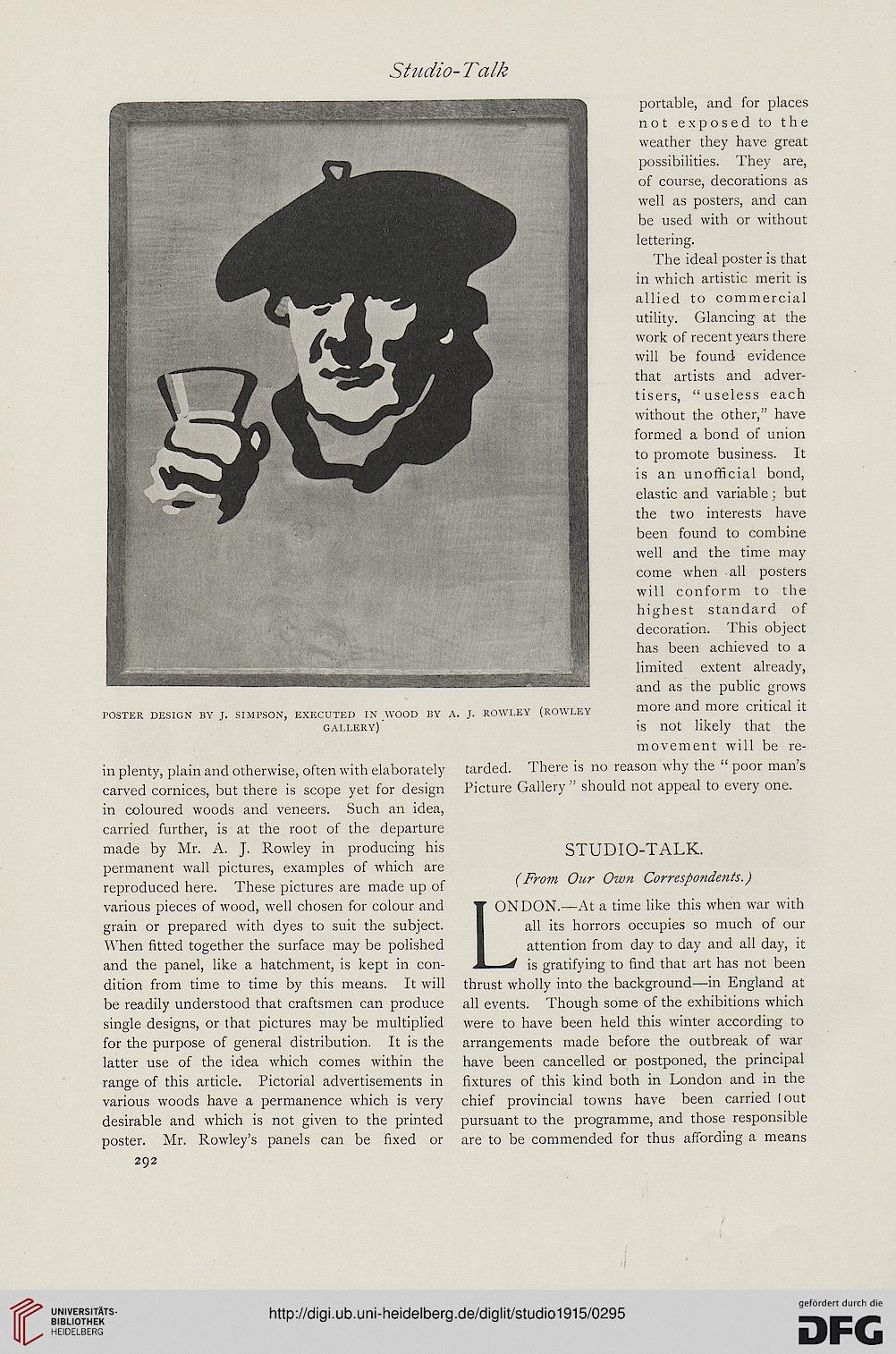 portable, and for places
not exposed to the
weather they have great
possibilities. They are,
of course, decorations as
well as posters, and can
be used with or without
lettering.

The ideal poster is that
in which artistic merit is
allied to commercial
utility. Glancing at the
work of recent years there
will be found evidence
that artists and adver-
tisers, "useless each
without the other," have
formed a bond of union
to promote business. It
is an unofficial bond,
elastic and variable; but
the two interests have
been found to combine
well and the time may
come when all posters
will conform to the
highest standard of
decoration. This object
has been achieved to a
limited extent already,
and as the public grows

poster design by j. simpson, executed in wood by a. j. rowley (rowley more and more critical it

gallery)' is not likely that the

movement will be re-
in plenty, plain and otherwise, often with elaborately tarded. There is no reason why the " poor man's
carved cornices, but there is scope yet for design Picture Gallery " should not appeal to every one.
in coloured woods and veneers. Such an idea,
carried further, is at the root of the departure

made by Mr. A. J. Rowley in producing his STUDIO-TALK,
permanent wall pictures, examples of which are

reproduced here. These pictures are made up of <From 0ur 0wn Correspondents.)

various pieces of wood, well chosen for colour and "W ON DON.—At a time like this when war with
grain or prepared with dyes to suit the subject. all its horrors occupies so much of our

When fitted together the surface may be polished attention from day to day and all day, it

and the panel, like a hatchment, is kept in con- M is gratifying to find that art has not been
dition from time to time by this means. It will thrust wholly into the background—in England at
be readily understood that craftsmen can produce all events. Though some of the exhibitions which
single designs, or that pictures may be multiplied were to have been held this winter according to
for the purpose of general distribution. It is the arrangements made before the outbreak of war
latter use of the idea which comes within the have been cancelled or postponed, the principal
range of this article. Pictorial advertisements in fixtures of this kind both in London and in the
various woods have a permanence which is very chief provincial towns have been carried lout
desirable and which is not given to the printed pursuant to the programme, and those responsible
poster. Mr. Rowley's panels can be fixed or are to be commended for thus affording a means
292