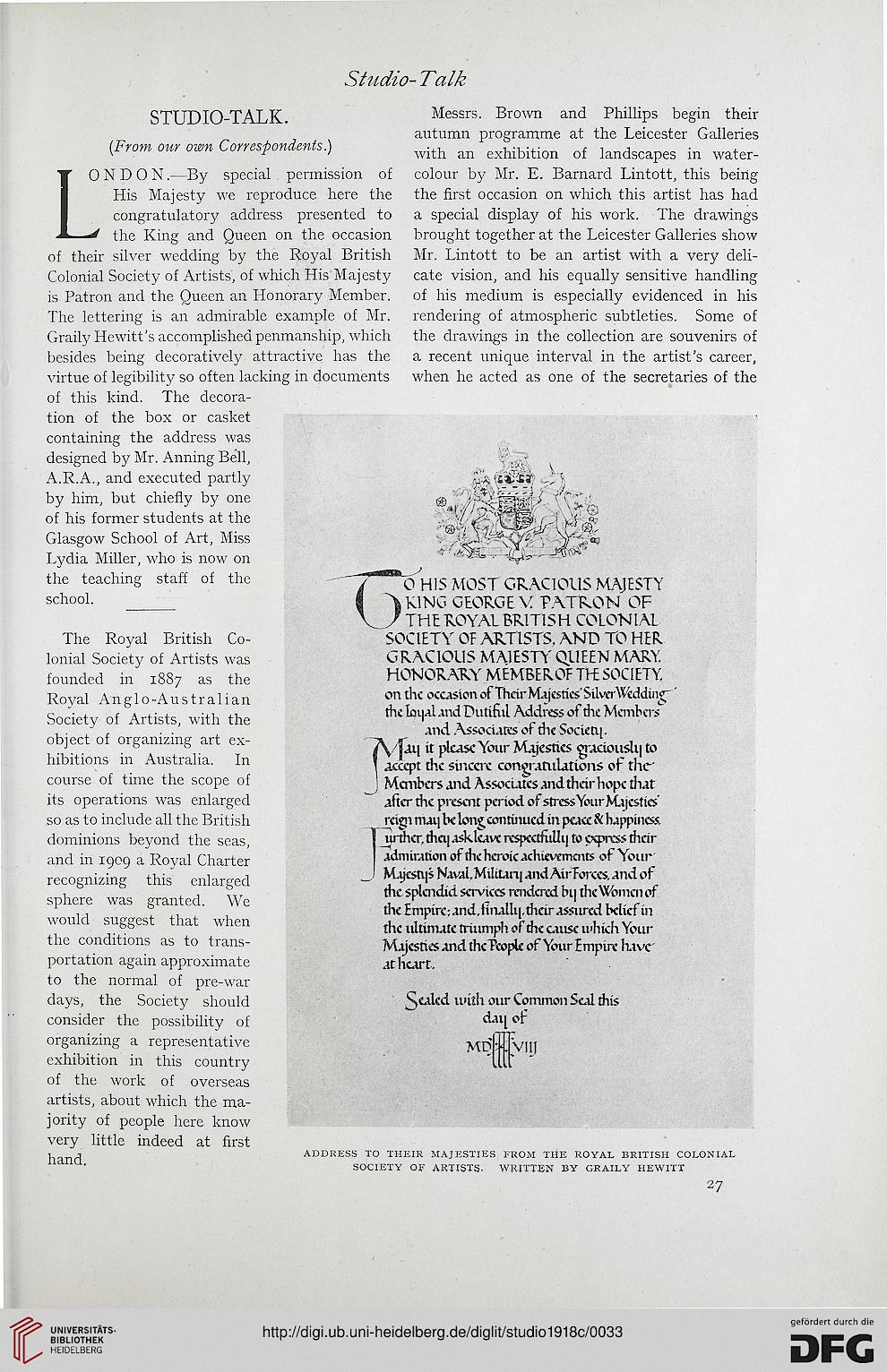 autumn programme at the Leicester Galleries

{From our own Correspondents) with an exhibition of landscapes in water-

LONDON.—By special permission of colour by Mr. E. Barnard Lintott, this being
His Majesty we reproduce here the the first occasion on which this artist has had
congratulatory address presented to a special display of his work. The drawings
J the King and Queen on the occasion brought together at the Leicester Galleries show
of their silver wedding by the Royal British Mr. Lintott to be an artist with a very deli-
Colonial Society of Artists, of which His Majesty cate vision, and his equally sensitive handling
is Patron and the Queen an Honorary Member. of his medium is especially evidenced in his
The lettering is an admirable example of Mr. rendering of atmospheric subtleties. Some of
Graily Hewitt's accomplished penmanship, which the drawings in the collection are souvenirs of
besides being decoratively attractive has the a recent unique interval in the artist's career,
virtue of legibility so often lacking in documents when he acted as one of the secretaries of the
of this kind. The decora-
tion of the box or casket
containing the address was
designed by Mr. Anning Bell,
A.R.A., and executed partly

by him, but chiefly by one ®

Glasgow School of Art, Miss \-
Lydia Miller, who is now on

the teaching staff of the "T^^O HIS MOST GRACIOUS MAJESTY

THE "ROYAL BRITISH COLONIAL
The Royal British Co- SOCIETY OF ARTISTS. AND TO HER

founded in 1887 as the HONORARY MEMBEROFTtf SOCIETY

Society of Artists, with the the%d^Dufi^

so as to include all the British reign maq belong continued m peace & happiness,

, , j ?Tr me splendid services rendered hi the women of

portation again approximate at heart,
to the normal of pre-war

days, the Society should uuth our Common Seal this

consider the possibility of <»f
organizing a representative MpffjlVll]
exhibition in this country
of the work of overseas
artists, about which the ma-
jority of people here know
very little indeed at first
hand.

ADDRESS TO THEIR MAJESTIES FROM THE ROYAL BRITISH COLONIAL
SOCIETY OF ARTISTS.. WRITTEN BY GRAILY HEWITT