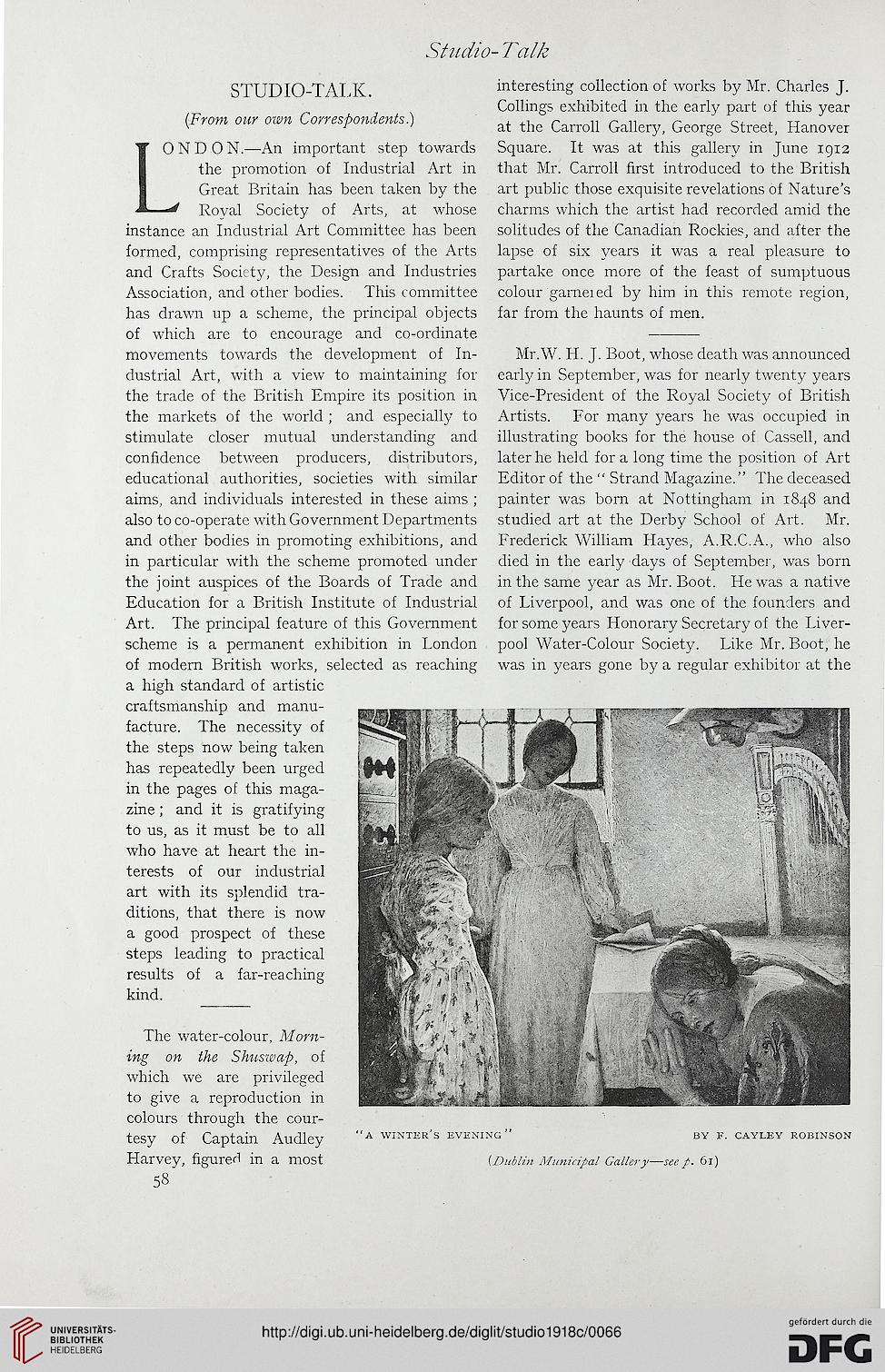 Collings exhibited in the early part of this year

LO N D 0 N.—An important step towards Square. It was at this gallery in June 1912

the promotion of Industrial Art in that Mr. Carroll first introduced to the British

Royal Society of Arts, at whose charms which the artist had recorded amid the

instance an Industrial Art Committee has been solitudes of the Canadian Rockies, and after the

formed, comprising representatives of the Arts lapse of six years it was a real pleasure to

and Crafts Society, the Design and Industries partake once more of the feast of sumptuous

Association, and other bodies. This committee colour garneied by him in this remote region,

has drawn up a scheme, the principal objects far from the haunts of men.

of which are to encourage and co-ordinate -

movements towards the development of In- Mr.W. H. J. Boot, whose death was announced
dustrial Art, with a view to maintaining for early in September, was for nearly twenty years
the trade of the British Empire its position in Vice-President of the Royal Society of British
the markets of the world ; and especially to Artists. For many years he was occupied in
stimulate closer mutual understanding and illustrating books for the house of Cassell, and
confidence between producers, distributors, later he held for a long time the position of Art
educational authorities, societies with similar Editor of the " Strand Magazine." The deceased
aims, and individuals interested in these aims ; painter was born at Nottingham in 1848 and
also to co-operate with Government Departments studied art at the Derby School of Art. Mr.
and other bodies in promoting exhibitions, and Frederick William Hayes, A.R.C.A., who also
in particular with the scheme promoted under died in the early days of September, was born
the joint auspices of the Boards of Trade and in the same year as Mr. Boot. He was a native
Education for a British Institute of Industrial of Liverpool, and was one of the founders and
Art. The principal feature of this Government for some years Honorary Secretary of the Liver-
scheme is a permanent exhibition in London pool Water-Colour Society. Like Mr. Boot, he
of modern British works, selected as reaching was in years gone by a regular exhibitor at the
a high standard of artistic
craftsmanship and manu-
facture. The necessity of
the steps now being taken
has repeatedly been urged
in the pages of this maga-
zine ; and it is gratifying
to us, as it must be to all
who have at heart the in-
terests of our industrial
art with its splendid tra-
ditions, that there is now
a good prospect of these
steps leading to practical
results of a far-reaching
kind.

The water-colour, Morn-
ing on the Shuswap, of
which we are privileged
to give a reproduction in
colours through the cour-
tesy of Captain Audley

Harvey, figured in a most (Dublin Municipal Gallery—see p. 61)