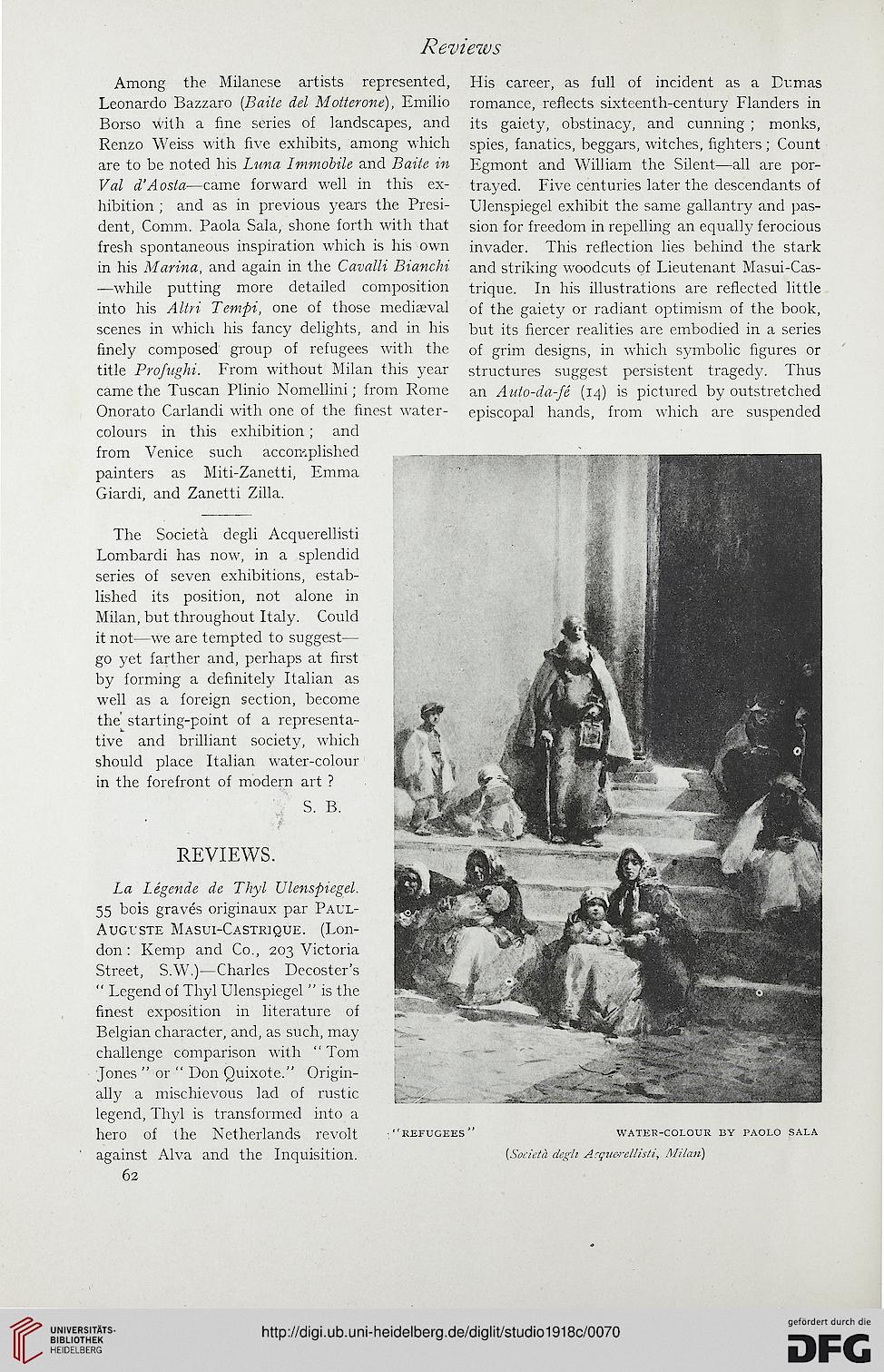 Among the Milanese artists represented, His career, as full of incident as a Pumas
Leonardo Bazzaro (Baite del Motterone), Emilio romance, reflects sixteenth-century Flanders in
Borso with a fine series of landscapes, and its gaiety, obstinacy, and cunning ; monks,
Renzo Weiss with five exhibits, among which spies, fanatics, beggars, witches, fighters; Count
are to be noted his Luna Immobile and Baite in Egmont and William the Silent—all are por-
Val d'Aosta—came forward well in this ex- trayed. Five centuries later the descendants of
hibition ; and as in previous years the Presi- Ulenspiegel exhibit the same gallantry and pas-
dent, Comm. Paola Sala, shone forth with that sion for freedom in repelling an equally ferocious
fresh spontaneous inspiration which is his own invader. This reflection lies behind the stark
in his Marina, and again in the Cavalli Bianchi and striking woodcuts of Lieutenant Masui-Cas-
—while putting more detailed composition trique. In his illustrations are reflected little
into his Altri Tempi, one of those mediaeval 0f the gaiety or radiant optimism of the book,
scenes in which his fancy delights, and in his but its fiercer realities are embodied in a series
finely composed group of refugees with the of grim designs, in which symbolic figures or
title Profughi. From without Milan this year structures suggest persistent tragedy. Thus
came the Tuscan Plinio Nomellini; from Rome an Auto-da-fe (14) is pictured by outstretched
Onorato Carlandi with one of the finest water- episcopal hands, from which are suspended
colours in this exhibition; and
from Venice such accomplished
painters as Miti-Zanetti, Emma
Giardi, and Zanetti Zilla.

The Societa degli Acquerellisti
Lombardi has now, in a splendid
series of seven exhibitions, estab-
lished its position, not alone in
Milan, but throughout Italy. Could
it not—we are tempted to suggest—
go yet farther and, perhaps at first
by forming a definitely Italian as
well as a foreign section, become
the starting-point of a representa-
tive and brilliant society, which
should place Italian water-colour
in the forefront of modern art ?

hero of the Netherlands revolt "refugees" watek-colour by paolo sala

against Alva and the Inquisition. {Society degli Acquerellisti, Milan)