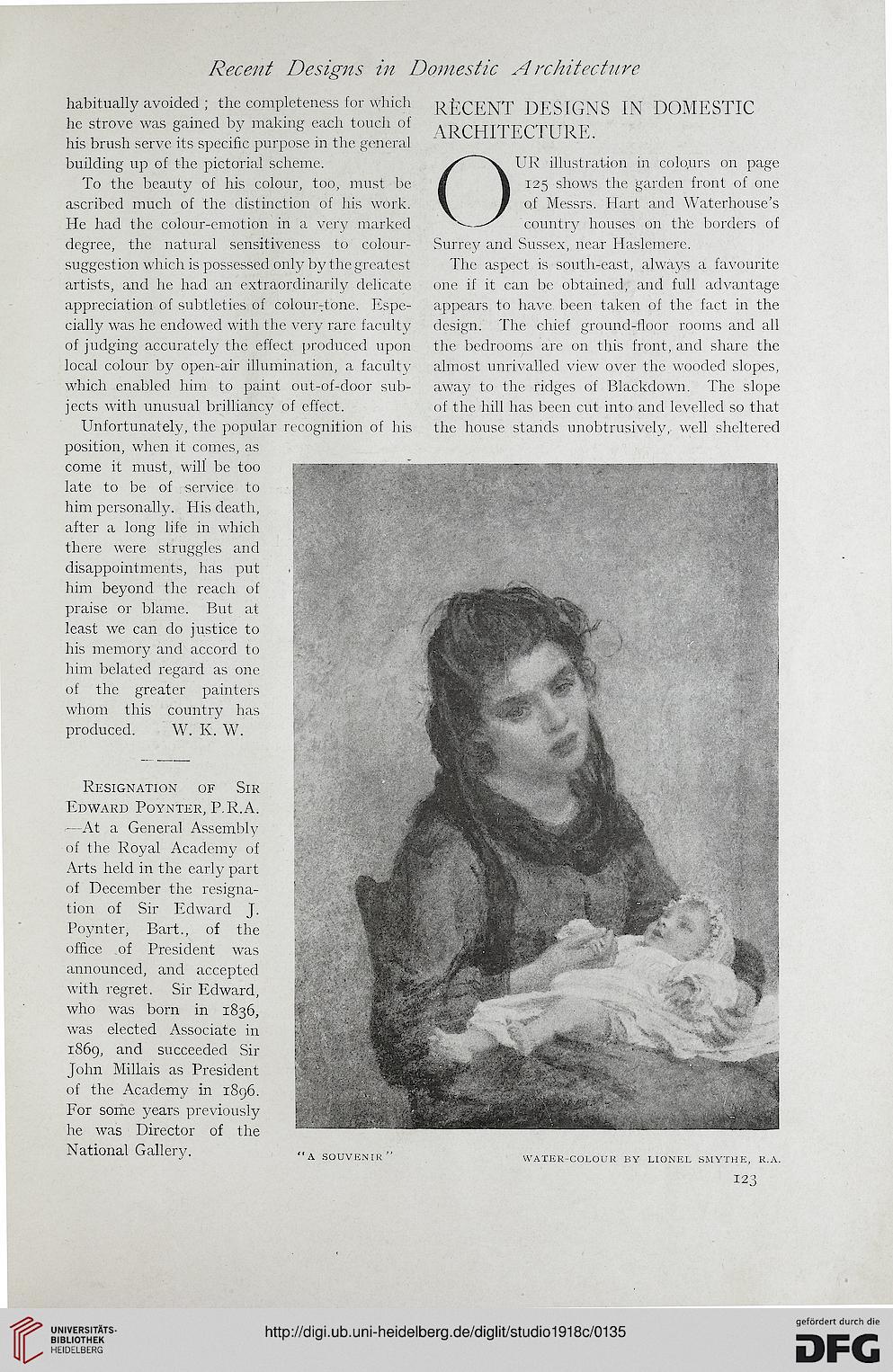 habitually avoided ; the completeness for which RECENT DESIGNS IN DOMESTIC
he strove was gained by making each touch of ARCHITECTURE
his brush serve its specific purpose in the general

building up of the pictorial scheme. f ~X UR illustration in colours on page

ascribed much of the distinction of his work. % W of Messrs. Hart and Waterhouse's

He had the colour-emotion in a very marked ^-—< country houses on the borders of
degree, the natural sensitiveness to colour- Surrey and Sussex, near Haslemere.
suggestion which is possessed only by the greatest The aspect is south-east, always a favourite
artists, and he had an extraordinarily delicate one if it can be obtained, and full advantage
appreciation of subtleties of colour7tone. Espe- appears to have been taken of the fact in the
cially was he endowed with the very rare faculty design. The chief ground-floor rooms and all
of judging accurately the effect produced upon the bedrooms are on this front, and share the
local colour by open-air illumination, a faculty almost unrivalled view over the wooded slopes,
which enabled him to paint out-of-door sub- away to the ridges of Blackdown. The slope
jects with unusual brilliancy of effect. of the hill has been cut into and levelled so that

Unfortunately, the popular recognition of his the house stands unobtrusively, well sheltered
position, when it comes, as
come it must, will be too IMBII^^
late to be of service to
him personally. His death,
after a long life in which
there were struggles and
disappointments, has put
him beyond the reach of
praise or blame. But at
least we can do justice to
his memory and accord to
him belated regard as one
of the greater painters
whom this country has
produced. W. K. W.

Resignation of Sir
Edward Poynter, P.R.A.
.—At a General Assembly
of the Royal Academy of
Arts held in the early part
of December the resigna-
tion of Sir Edward J.
Poynter, Bart., of the
office of President was
announced, and accepted
with regret. Sir Edward,
who was born in 1836,
was elected Associate in
1869, and succeeded Sir
John Millais as President
of the Academy in 1896.
For some years previously
he was Director of the
National Gallerv.