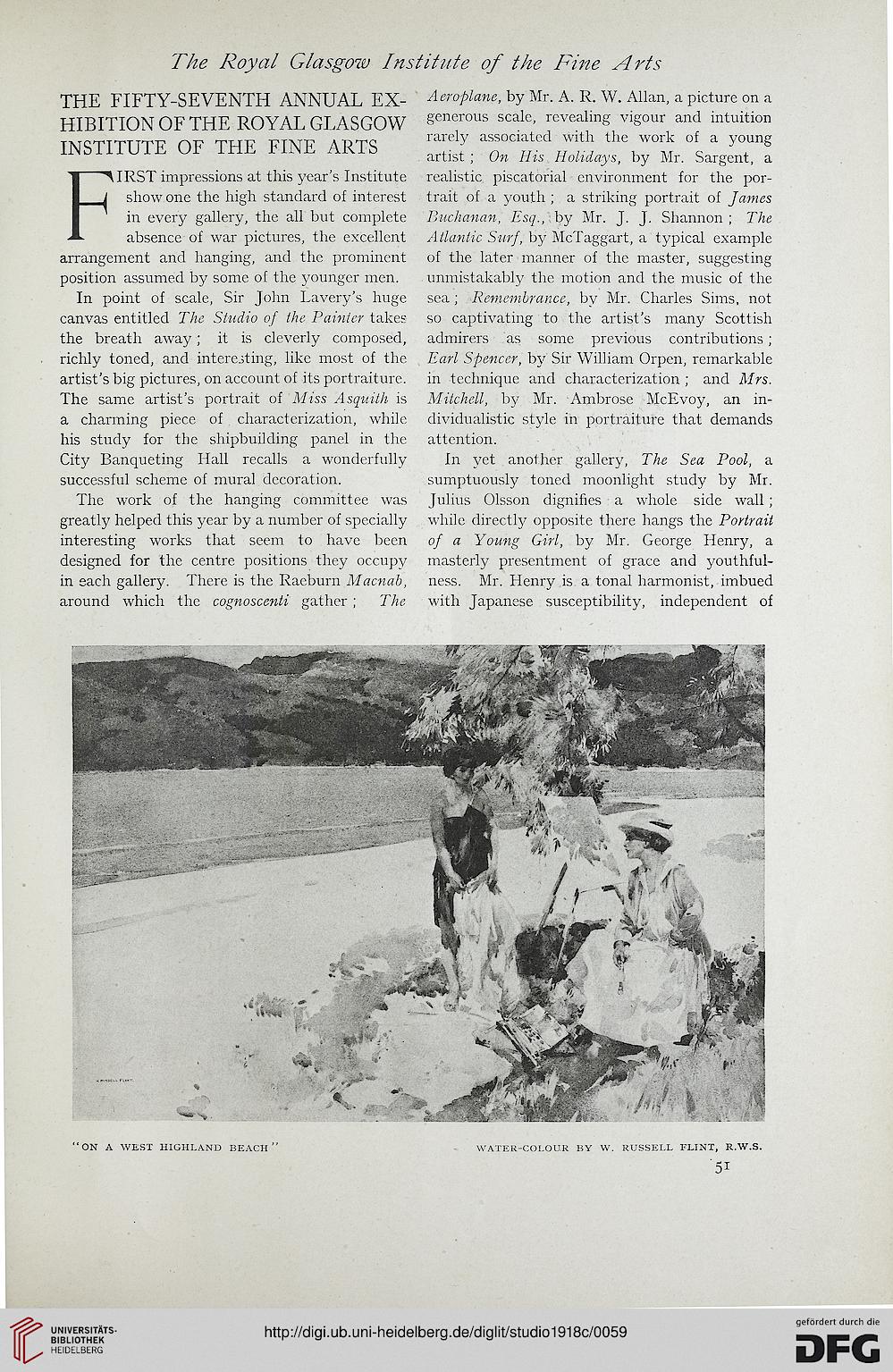 FIRST impressions at this year's Institute
show one the high standard of interest
in every gallery, the all but complete
absence of war pictures, the excellent
arrangement and hanging, and the prominent
position assumed by some of the younger men.

In point of scale, Sir John Lavery's huge
canvas entitled The Studio of the Painter takes
the breath away ; it is cleverly composed,
richly toned, and interesting, like most of the
artist's big pictures, on account of its portraiture.
The same artist's portrait of Miss Asquith is
a charming piece of characterization, while
his study for the shipbuilding panel in the
City Banqueting Hall recalls a wonderfully
successful scheme of mural decoration.

The work of the hanging committee was
greatly helped this year by a number of specially
interesting works that seem to have been
designed for the centre positions they occupy
in each gallery. There is the Raeburn Macnab,
around which the cognoscenti gather ; The

Aeroplane, by Mr. A. R. W. Allan, a picture on a
generous scale, revealing vigour and intuition
rarely associated with the work of a young
artist ; On His Holidays, by Mr. Sargent, a
realistic piscatorial environment for the por-
trait of a youth ; a striking portrait of James
Buchanan, Esq., by Mr. J. J. Shannon ; The
Atlantic Surf, by McTaggart, a typical example
of the later manner of the master, suggesting
unmistakably the motion and the music of the
sea ; Remembrance, by Mr. Charles Sims, not
so captivating to the artist's many Scottish
admirers as some previous contributions ;
Earl Spencer, by Sir William Orpen, remarkable
in technique and characterization ; and Mrs.
Mitchell, by Mr. Ambrose McEvoy, an in-
dividualistic style in portraiture that demands
attention.

In yet another gallery, The Sea Pool, a
sumptuously toned moonlight study by Mr.
Julius Olsson dignifies a whole side wall;
while directly opposite there hangs the Portrait
of a Young Girl, by Mr. George Henry, a
masterly presentment of grace and youthful-
ness. Mr. Henry is a tonal harmonist, imbued
with Japanese susceptibility, independent of